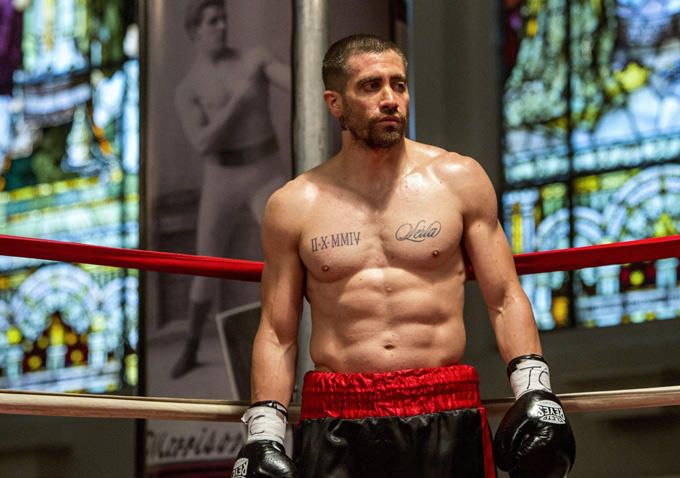 Jake Gyllenhaal already has one of Hollywood’s most enviable physiques, but he pulled no punches to transform his bod for his latest role as a boxing champ in "Southpaw."

He's not alone when it comes to dramatic body makeovers in the name of art. Here’s a roundup of six actors who also made transformations to step inside the ring on the big screen.

Transformed: After 2014’s “Nightcrawler” saw him drop 30 pounds from his 180-pound muscular frame to portray what he has described as a “literally and figuratively hungry” videographer in last year’s thriller, the heartthrob actor made a turn in the opposite direction to pile on muscle to portray a fictional boxer in “Southpaw.”
How he did it: He underwent eight months of boxing training by instructor Terry Clayborn. Some of his routine’s included flipping a 300-pound tractor tire and doing 1,000 sit-ups daily.

Transformed: She beat out more than 300 women for the lead role in 2000’s “Girlfight,” starring as a teen who trains as a boxer and keeps her passion as a secret from her father.
How she did it: Rodriguez committed to five to six days a week of training, having previously never boxed. While promoting the film, she cited “Crouching Tiger, Hidden Dragon” star Michelle Yeoh as her inspiration.

Transformed: To portray the real-life story of boxer “Irish” Micky Ward in 2010’s “The Fighter,” opposite Christian Bale as his half-brother Dickie Ecklund.
How he did it: Starting his days as early as 4:30 a.m., Wahlberg would train for three hours every morning with coaching from boxing greats like Freddie Roach and Manny Pacquiao. It took Wahlberg nearly four years to develop a boxer’s body, he has said. He dropped 30 pounds to resemble the figure of a world welterweight champion and installed a boxing gym in his home.

Transformed: Portraying a former pro boxer-turned-trainer who suffers from drug addiction, Bale dropped pounds to resemble the real-life trouble-plagued Dickie Ecklund, who helped train his half-brother “Irish” Micky Ward, played by Mark Wahlberg, in 2010’s “The Fighter,” a role that scored him a Best Supporting Actor Oscar.
How he did it: Bale previously joked that he did “a lot of coke,” to look gaunt and thin, but he just committed to running up to four hours a day while on set.

Transformed: Swank changed her physique to tackle the role of waitress-turned-boxer Frankie Dunn in 2004’s “Million Dollar Baby,” a role that nabbed her a Best Actress Oscar.
How she did it: Typically svelte Swank weighed 129 pounds after three months of bodybuilding training. The star was asked by producers to gain 10 pounds of muscle to convincingly portray her budding boxer character, however Swank managed to bulk up to 19 pounds.

Transformed: Teen heartthrob Miles Teller made an incredible transformation to portray real-life boxer Vinny Paz in the forthcoming movie “Bleed for This.”

How he did it: Throughout an eight-month process, the actor has said that he underwent four hours of boxing and two hours of training with weights to change his body.

Bleed for This
"This is what the greatest comeback in sports history looks like"
68
R1 hr 56 minNov 4th, 2016
Watch Bleed for This Online