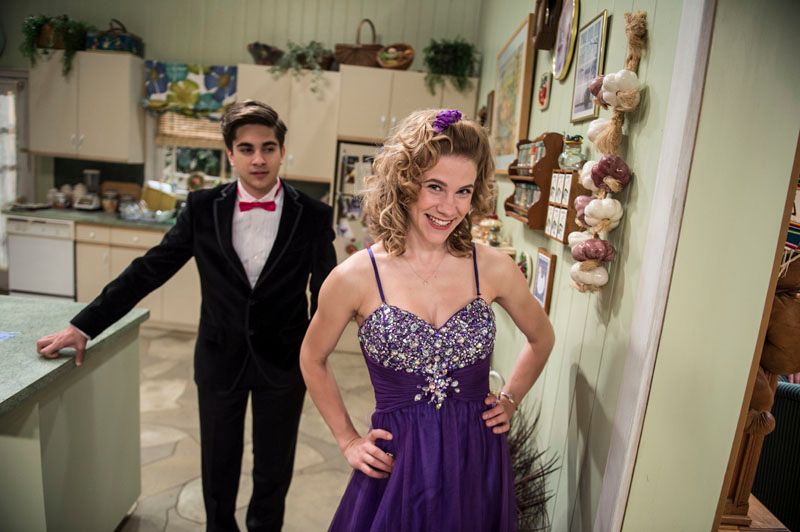 All sequins are not created equal.

“Details is the right word,” costume designer Rebekka Sorenson tells Made in Hollywood. “Definitely details, texture, color, patterns, and if I can put the bling in there, I will.”

The 2014 Emmy-winning costume designer (for the Hub network’s “Spooksville”) reveals that her penchant for “glitz” is realized in Lifetime’s “The Unauthorized Full House Story,” airing on Saturday.

But re-envisioning the wildly popular ‘90s sitcom’s wardrobe of clashing colors and fads of the decade meant that her team had to start from scratch. “We had to come up with our own version,” she explains. “At the same time the characters had to look like the characters that everyone’s used to seeing. But we couldn’t copy anything.”

Copying, Sorenson insists, is a no-no among designers. Instead, she looked to her collection of vintage Sears catalogs to research the trends of the show’s run, from 1988 to 1995, as her inspiration when she created the wardrobe.

“It’s always easy to copy,” she explains. “Honestly, you never know if there is a copyright for those kind of things. Also, I don’t feel as a designer that you need to copy to get the feel... you never copy—because that is something another designer did. It would not be my work; it’s their work.”

“The Unauthorized Full House Story” was shot in Vancouver, where Sorenson says she sourced the cast wardrobe from mostly vintage stores—matching retro and contemporary pieces. Though Sorenson achieved the “look” and “feel” of the era, she says that it was necessary to alter the silhouettes to get an attractive, “modern fit.”

“Cameras can add bulk to certain prints and if you don’t—especially women—shape to their waist, then they will look heavier than they are and it doesn’t look as flattering and film as nice,” she explains. “The ‘80s and ‘90s can be quite disheveled in a way—it was a looser fit. So, of course, we don’t want that in this movie. Even though you did have in the ‘80s and ‘90s things that were quite fitted, but not as much as it is today.”

Minor alterations aside, Sorenson had only a few scenes that required her to reconstruct some garments. “We have a couple of builds—or half-builds, as I call them,” she says, explaining, “we will find something and add lace, make it shorter. We call that a half-build.”

Sorenson adds that in the film the bedazzled purple prom dress worn by actress Jaime Schneider as Andrea Barber (Barber played “Full House’s” Kimmy Gibbler) was one of the few outfits that needed to be overhauled.

Even so, with a cast of more than 16 actors playing the “Full House” stars as their characters and off-screen selves, the biggest challenge was coordinating the 52 wardrobe changes. “Usually 20-25 is a lot,” Sorenson says. “This is the most that I’ve ever dealt with because you’re telling story over time, so you have costumes within the movie (of the actors portraying the cast off-camera) and then the character costumes, so that adds a lot.”

The difficult task with so many costumes and actors, Sorenson says, is that she had to make certain the cast didn’t wear similar colors while sharing scenes. “When you have 10 people in the same room,” she says, “you have to make them work together and not have the same color or style.”

It’s been said that what’s old is new again when it comes to fashion, and there is at least one style staple of “Full House” that Sorenson says has been revived today. “Scrunchies are even back,” she says enthusiastically.

Still, that doesn’t mean that the characters on the ABC sitcom will be remembered as style trailblazers. Sorenson says the cast wardrobe simply followed—not started—the trends of the time. “I think for then, yes, they were definitely stylish. Today, no,” she admits.

But there is one standout that scores high marks from Sorenson—Loris Loughlin’s Becky Katsopolis, who played John Stamos’ onscreen wife (in Lifetime's version, actress Stephanie Bennett plays the character, below far right). “When you got more into the ‘90s, there were a few times when Becky looks more fashionable,” Sorenson says, adding that she still watches reruns of the series with her 7-year-old daughter.

Loughlin will take part in the forthcoming “Fuller House” spinoff series, reprising her role opposite Stamos. The Netflix reboot will see Candace Cameron Bure reprising her role as grownup D.J. Tanner, now a single mother, who is raising her children alongside her best friend Kimmy Gibbler (Andrea Barber), premiering next year on the streaming platform.

“Full House” aired from 1987 to 1995 and followed a widowed father (Bob Saget) as he raised his three daughters (Candace Cameron Bure, Jodie Sweetin, and twins Mary-Kate and Ashley sharing their role) in his home in San Francisco, along with the help of his best friend (Dave Coulier) and brother-in-law (John Stamos).

From its start as an unassuming family comedy in 1987 to its eventual wildly popular 192-episode run,...Read More