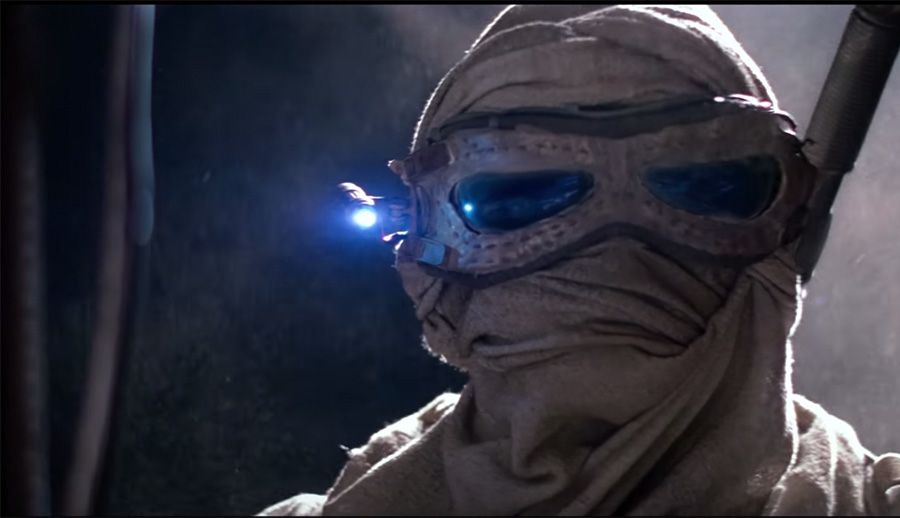 Daisy Ridley as Rey in Star Wars: The Force Awakens

In "Star Wars: The Force Awakens," the character comes onto the screen with a tan scarf wrapped around the head and goggles to protect the eyes against blowing desert sand, costume elements that director J.J. Abrams used to further the story.

"When we first see her, J.J. wanted her introduction to be a bit mysterious," says costume designer Michael Kaplan. "We don't know if she's a man or a woman or an alien."

Only later, when she unwraps the scarf and takes off the goggles, does the character reveal herself to the audience as Rey, played in the blockbuster by Daisy Ridley.

"For me it was so incredible, the whole thing of seeing how a film is made," Ridley says in a bonus feature with the DVD or digital download edition of the film. "Especially with Michael with this film is that the costumes really reflect the settings. It works so well."

Kaplan says he did not do it alone, explaining, "There were so many elements and individuals responsible for Rey's look."

And each look came with a list of considerations, from the story to the setting. It began with thinking about how to dress Rey on her barren home planet where she was a scavenger of spacecraft wrecks for old parts and metals to sell.

"The materials, I thought, had to be very desert-like, protective in a way," says Kaplan, "and yet I knew that it would be beautiful if she was in the desert, and it was windy, for there to be something to be blowing and moving in the wind."

For more interviews with the stars, as well as DVD featurettes and exclusive behind-the-scenes action, check out the special Star Wars DVD section of the Made in Hollywood YouTube page. Watch our full interview with Daisy Ridley below: