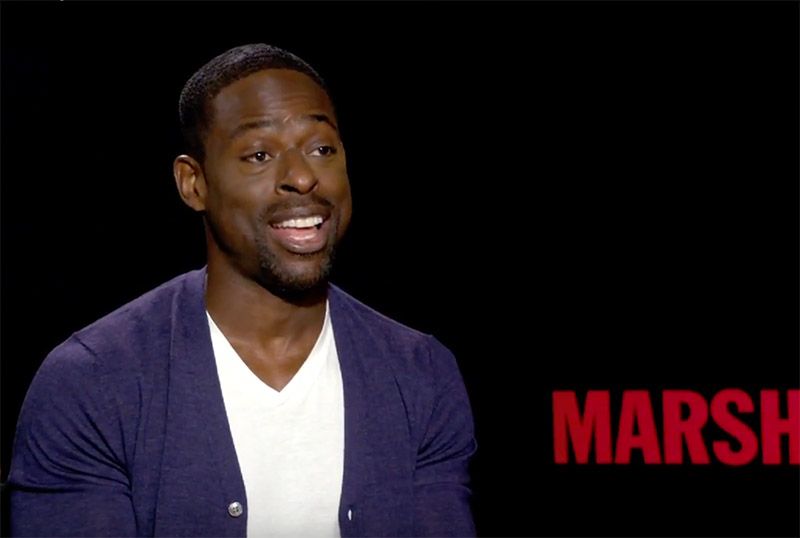 Before Sterling K. Brown signed on for the historical drama "Marshall," he knew the outlines of the story. He knew it was about Thurgood Marshall, the first African American justice on the U.S. Supreme Court. He knew that as a lawyer Marshall was on the winning side of the landmark Brown v. Board of Education case that he desegregated schools.

"But I didn't know that that Marshall was the sole lawyer for the NACCP in 1941, going across the country defending African American defendants," the actor tells Made in Hollywood reporter Patrick Stinson. "I didn't know about Joseph Spell."

Which meant Brown was in for a crash course in American history as he was to play Spell, an African American chauffeur accused of the rape and attempted murder of white socialite Eleanor Strubing in a story that dominated the headlines and perpetuated racial stereotypes. Spell was represented by Marshall, then a 32-year-old attorney for the NAACP Legal Defense Fund, and the case would be the center of the movie.

"It's one of those things where if you want to fool yourself into thinking you're in a post-racial society, all you have to do is to look at a movie like 'Marshall' that took place in 1941, then look to Charlottesville," he says. "Things are transpiring in this world that let us know beyond a shadow of a doubt that this ugly abscess of racism is still very much a part of today's society."

And yet it was so much worse when Marshall, played by Chadwick Boseman, took on clients like Spell.

"I was given hope in knowing that there was somebody like Thurgood Marshall who had the legal mind to present a defense worthy of getting somebody off, but also the fearlessness, despite his own personal peril," says Brown. "I find the story incredibly inspiring. We definitely stand on the shoulders of giants like Thurgood Marshall. He makes life easier."

Dealing with such weighty material, the actors found a safe environment on director Reginald Hudlin's set.

"When things of such tense subject matter are being portrayed in front of the camera, oftentimes behind the camera you have to do things to de-escalate," he says. "So actually we had a lot of fun. There was a lot of laughter and a lot of jokes. You try to find that middle ground that allows you to maintain your sanity. Because if it's all heavy all the time, that's a hard environment to keep going."

'Honey, I Shrunk the Kids' Reboot in the Works With Josh Gad

Josh Gad Defends 'Gay Moment' in 'Beauty and the Beast'