Prior to the Internet, before swiping right, in the days preceding both speed and blind dating, there were Matchmakers, experts at love who took the worry out of making a match that would last a lifetime - or until the next marriage. Here are a few of Moviefone’s favorite Movie Matchmakers. 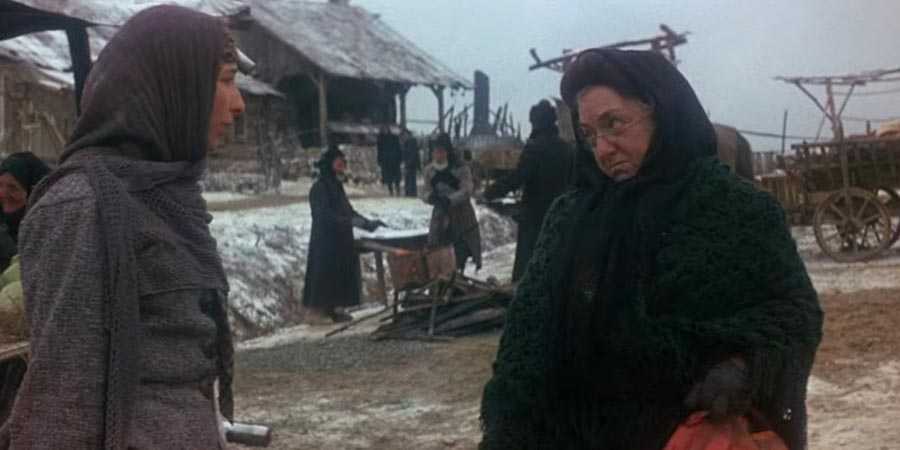 Yente (Molly Picon) is the OG matchmaker in the Russian village of Anatevka where she has her sights set on Tevye and his family of five girls (“Girls,” he says ruefully). Yente makes a deal with the local butcher to arrange a match between him and Tevye‘s eldest, Tzeitel. The butcher is named Lasar Wolf, pronounced like he’s an early prototype of the secret Jewish space laser, but Tzeitel already has feelings for another, much to Yente’s chagrin. Love eats into the matchmaker’s fee. Fiddler is a 3-hour musical epic with classic songs and occasional appearances by Yente, who was so memorable the word “yente” became synonymous with matchmakers in Jewish circles. But, when you listen to “Matchmaker, Matchmaker” beyond the opening lines (“Matchmaker, Matchmaker, make me a match. Find me a find, catch me a catch.”), you hear a darker side. Yente is willing to pair young girls with drunks and abusers to keep her fees rolling in, because the worst husband is better than no husband.

The Matchmaker (voiced by Miriam Margolyes) in 'Mulan'

Her appearance is brief, but is an important catalyst for the tale of the young warrior, Mulan. Here, the Matchmaker, voiced by Miriam Margolyes, operates out of a sense of honor more than a purely monetary element, although the deference she is shown in the village indicates she probably does all right for herself. When young maidens are summoned before her, they are there for inspection, so she may guarantee prospective grooms that their bride knows the ways of proper Chinese wives. The Matchmaker is the first line of marriage defense, and when Mulan fails to impress (“You may look like a bride, but you’ll never bring your family honor!”), the rejection sets her story in motion.

A tomboyish girl disguises herself as a young man so she can fight with the Imperial Chinese Army against the invading Huns. With help from wise-cracking dragon...Read More

Jane Austin’s novel has been brought to the screen a few times, with two versions being direct, appropriately-named adaptations. Gwyneth Paltrow is young Emma Woodhouse in the first, a British socialite delighted by her supposed matchmaking prowess. The movie opens on a wedding she set in motion through a simple introduction, and full of overconfidence in her abilities, she decides it is time for the village vicar to be paired with a love interest. If there had been some version of Instagram available back then, Emma would probably be an expert with selfies and filters, but in the English countryside, she is left with only human beings to manipulate. This film shares many story beats with the more recent 'Emma.,' played by the wide-eyed Anya Taylor-Joy, who recently grabbed well-deserved attention for her work in The Queen’s Gambit. Her take on Miss Woodhouse has decidedly less chess and drug use than that, but as with the earlier 'Emma,' costumes and sets are gorgeous and the performances keep it light and enjoyable.

Emma Woodhouse is a congenial young lady who delights in meddling in other people’s affairs. She is perpetually trying to unite men and women who are utterly wrong...Read More

In 1800s England, a well-meaning but selfish young woman meddles in the love lives of her friends.Read More

Alicia Silverstone as Cher in 'Clueless'

Around the time the Gwyneth version of Emma started production, director Amy Heckerling had already been shooting a modernized version, starring Alicia Silverstone as Cher, a well-meaning matchmaker at her local high school. Cher is not entirely altruistic; she sets up two of her teachers to increase their dopamine levels so they’ll raise her midterm grades. The cast is kind of incredible, considering how much you’ve seen them in since 1995, and the clever reworking of a 19-century British novel into a snapshot of late 20th-century American high school is still entertaining.

Shallow, rich and socially successful Cher is at the top of her Beverly Hills high school's pecking scale. Seeing herself as a matchmaker, Cher first coaxes two...Read More

Barbra Streisand’s matchmaker is a hustler, through and through, who makes her living via matchmaking and other sidelines. She spends her time here looking for a wife for the well-known “half-a-millionaire,” Horace Vandergelder (Walter Matthau). The hustle here is that Dolly’s not looking that hard - she intends to pair herself with the wealthy bachelor. The film, directed by Gene Kelly, features show-stopping performances, including one of the final #1 hits for Louis Armstrong, the titular “Hello, Dolly!” The movie was a struggle to make, since Matthau and Streisand argued constantly, with him telling Babs at one point that she “had no more talent than a butterfly’s fart.” She is, of course, beloved today and he starred in the Grumpy Old Men franchise.

She’s the most twisted matchmaker on the list, but Sarah Michelle Gellar nails the role of a terrible rich girl determined to destroy another society girl through matchmaking. Using hidden cameras, sexual tension and her stepbrother’s (Ryan Phillippe’s) step-incestuous desires for her smokin’ bod, she succeeds in screwing up several young lives and leaves herself open for a serious comeuppance. If you like your matchmaking hot and steamy, with a side order of girl kisses between Gellar and Selma Blair, 'Cruel Intentions' scratches that itch.

Slaking a thirst for dangerous games, Kathryn challenges her stepbrother, Sebastian, to deflower their headmaster's daughter before the summer ends. If he succeeds,...Read More