If you're curious as to what new movie this week might be best for you, Moviefone is here to help you find it and watch it. This week’s films feature adorable pets who save the day, royalty, and guys who have really noisy thoughts. Here are the movies we're suggesting this week: 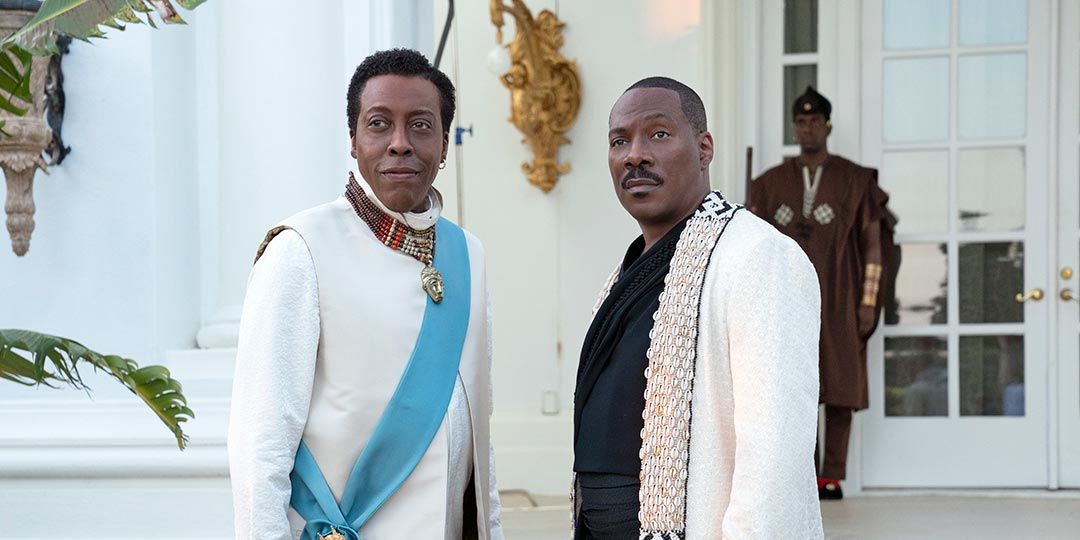 In the 33 years since we first met Prince Akeem (Eddie Murphy) and Semmi (Arsenio Hall), life in Zamunda has been mostly peaceful and prosperous. He has three wonderful, talented, strong daughters, but sadly the eldest (KiKi Layne) doesn’t seem to be in contention for the throne as King Jaffe Joffer (James Earl Jones) appears to be shuffling off this mortal coil. “Lucky” for Akeem, he discovers that a one-night stand in New York City all those years ago yielded a son (Jermaine Fowler). But does he have what it takes to take the throne?

Watch It If: Repeatedly watching the first film just isn’t doing it for you anymore, and you’d like an eye full of gorgeous costumes and an ear full of fantastic, recognizable music specially fit for Zamunda.

Prince Akeem Joffer is set to become King of Zamunda when he discovers he has a son he never knew about...Read More

Raya and the Last Dragon (Disney+)

Raya (Kelly Marie Tran) is a warrior princess who is also the guardian of the dragon gem, the last piece of dragon magic existing in the fictional world of Kumandra. In order to reunite the world, she has to track down broken pieces of the gem and the only one she can trust is a wisecracking dragon named Sisu (Awkwafina). So, this should be easy.

Watch It If: You’re prepared to spend a night with a dragon who is way funnier than the memes you’ve been sending to people on your group text chain, and if you have a thing for giant pangolins rollin’ around and being really cute (shout out to Tuk Tuk, aka Alan Tudyk).

Long ago, in the fantasy world of Kumandra, humans and dragons lived together in harmony. But when an...Read More

If, when faced with a difficult situation, you say things like “that’s just how the cookie crumbles,” then you are a decrepit, ancient, aged person and you need to let the youth take over in the quest to make the world a better place. Vivian (Hadley Robinson) is such a kid, who finds herself tasked with motivating the students at her high school to make change in favor of equality. She finds her mom’s (Amy Poehler) old zines championing feminism and forward-thinking, and she sets out to make her own and speak up for change.

Watch It If: You’re a fan of Amy Poehler as a director, and if you want to see commonplace events of high school life through a new, more progressive lens. Also, a must see for teens who feel like no one understands.

Chaos Walking (In Theaters and IMAX)

Women no longer exist where Todd (Tom Holland) lives in Prentisstown. So when Daisy Ridley as Viola, a survivor of a crashed spaceship, crosses his path, he’s noticeably perplexed. Viola happens to know that’s the case, since in this sci-fi world, men’s thoughts broadcast as telepathy to everyone in the general vicinity. They call it “noise,” and each manifestation of it is different. But with bad guys lingering around every corner, some whose minds suspiciously don’t broadcast their thoughts, Viola finds herself on the run with Todd, whose thoughts are so big they serve as a beacon for said bad guys. Great.

Watch It If: You want to see a little more out of these stars outside their superhero or space odyssey realms, and if you enjoyed the sci-fi world of Annihilation and want to add a little dash of Western flavor in there.

The SpongeBob Movie: Sponge on the Run (Paramount+)

Patrick and SpongeBob in 'The SpongeBob Movie: Sponge on the Run'

Gary has been snail-napped. THIS IS NOT A DRILL, PEOPLE. SpongeBob’s faithful companion has disappeared, and the only way to solve the mystery and bring that slimy little guy home is to go back to where it all began. Consider this SpongeBob’s origin story, complete with the usual offbeat humor and cameos plentiful in these films.

Watch It If: Your only contact with a sponge has been continually washing and re-washing your own dishes this past year, and you need a dose of sweetness from Bikini Bottom.

When his best friend Gary is suddenly snatched away, SpongeBob takes Patrick on a madcap mission far...Read More

The Truffle Hunters (In Theaters in NY & LA)

A scene from 'The Truffle Hunters'

If you’ve ever passed a truffle and went into cardiac arrest at the cost, this documentary unlocks a smidgeon of the economic mystery but more importantly, the magical world that exists around them. Nestled in the forests of Piedmont, Italy, the film features a handful of men who have dedicated their days AND nights to searching out Alba truffles with their truffle-sniffing dogs. The result is a beautifully shot fly-on-the-wall glimpse into lives you’ve likely never known existed.

Watch It If: You need a change of pace from the more typical frenzied energy of most releases. This cast of wacky characters is so intimate, it’s almost like you’ve been invited to stay in their homes and drink wine, watch them type letters, and discuss the awesomeness of their dogs (that have names like Birba, which means “mischievous”).

Deep in the forests of Piedmont, Italy, a handful of men, seventy or eighty years young, hunt for the...Read More