This week's column takes a look two women directors with documentaries about two Hollywood legends and feminist icons: Mariem Pérez Riera’s ‘Rita Moreno: Just a Girl Who Decided to Go for It’ and Susan Lacy’s ‘Jane Fonda in Five Acts.’

Rita Moreno: Just a Girl Who Decided to Go for It (directed by Mariem Pérez Riera) 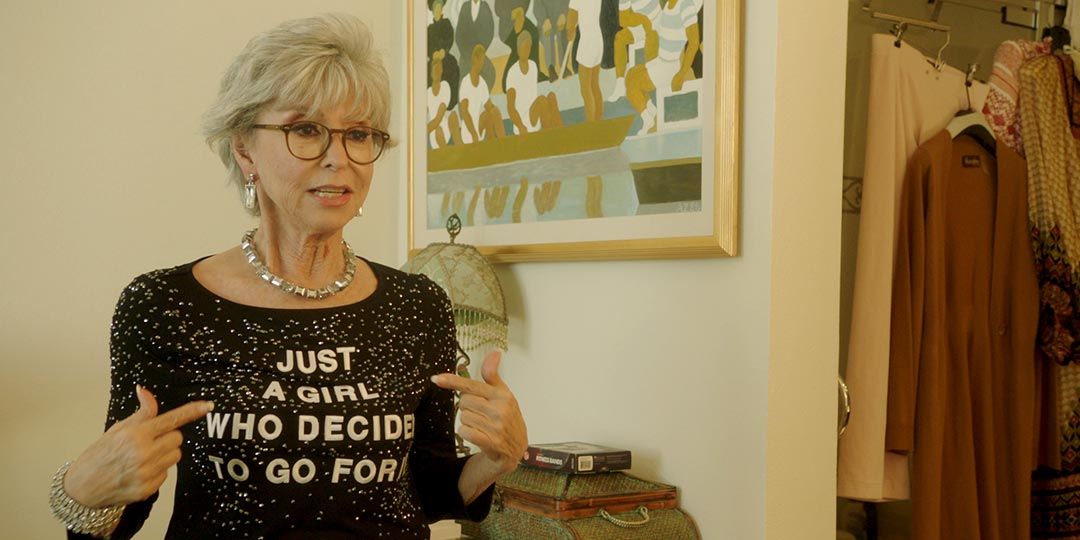 Rita Moreno as seen in 'Rita Moreno: Just a Girl Who Decided to Go for It'

Beginning her career at the age of 9 playing the lead in Jane Morrison’s ‘Los dos Mundos de Angelita,’ Mariem Pérez Riera decided early on that she wanted to become a film director. In 2005, she founded her own production company, Maramara Films. Riera has directed episodes of the television show ‘Chamacas,’ plus several documentary features and shorts, as well as co-directing the 2007 romantic comedy ‘Maldeamores’ starring Luis Guzmán.

Riera finished the final cut of this new documentary on March 13th, 2020, just as the world was headed into quarantine. Post-production took place during the following year, and the film had its debut at the 2021 Sundance Film Festival. Originally conceived by long-time television creative Norman Lear and Broadway’s Lin-Manuel Miranda, Riera was brought on board as a producer, editor and director in 2019.

Using archival footage, film clips, and new interviewers with Rita Moreno and those she inspired, the documentary traces her career in Hollywood over seven decades. Ultimately a story about persistence in the face of discrimination, the film exposes the festering wounds of Hollywood’s racist past to show the systematic issues, like colorism, that are still in play today. Moreno is frank about her early days in the biz, being relegated to bit parts - mostly in brown face and with stereotypical accents.

Even in her Oscar-winning role as Anita in West Side Story, Moreno wore dark makeup and, as an immigrant character, once again a stereotypical accent. She is incredibly open and vulnerable about her struggles with insecurity, with sexual harassment, and with her tumultuous (and ultimately toxic) relationship with Marlon Brando. While the film does not shy away from the lows of Moreno’s career, it really shines when she shines, showcasing the work she did that made her an EGOT - Emmy, Grammy, Oscar, Tony winner - so early in her career.

The title of the doc comes from a t-shirt bedazzled with the phrase JUST A GIRL WHO DECIDED TO GO FOR IT that Moreno had picked up in Boston and decided to wear to the Television Critics Association Gala, in which she received a lifetime achievement award. Like the shirt itself, Moreno is now able to be inarguably her brassy self at all times. Something to which we can all aspire.

Rita Moreno: Just a Girl Who Decided to Go for It

‘Rita Moreno: Just a Girl Who Decided to Go for It’ is in theaters now and will air on PBS’s American Masters some time in the future.

In 1986, filmmaker Susan Lacy created the PBS documentary series known as American Masters. Over the last 35 years, the program has helped produce some of the greatest documentaries about American artists and creators. Titles include ‘Maya Angelou: And Still I Rise,’ ‘James Baldwin: The Price of the Ticket,’ ‘Miles Davis: Birth of the Cool,’ ‘No Direction Home: Bob Dylan,’ and more. Lacy served as executive producer of the series until 2012. She said the concept for the series began with her Master’s degree in American Studies, her belief that American culture should be looked at through the broadest context, and the lack of a true biography series on PBS at the time.

In 2012, Jane Fonda attended the premiere of ‘Inventing David Geffen’. It blew her mind, and she knew exactly who she wanted to tell her story. She sought out Lacy to work on the project that eventually became ‘Jane Fonda In Five Acts.’ Debuting at the 2018 Sundance Film Festival, the documentary landed on HBO, rather than American Masters. It was nominated for the Primetime Emmy Award for Outstanding Documentary or Nonfiction Special, although it did not win.

Lacy immediately knew she wanted to take Fonda’s incredibly complicated life story and look at it through the lens of a five act play. Lacy stated she feels that Jane’s final act is as exciting as her first, and you can feel that vision in the documentary itself.

The first four acts are named after influential men in her life: ‘Henry’ for her father Henry Fonda, ‘Roger’ for her first husband Roger Vadim, ‘Tom’ for her second husband Tom Hayden, and ‘Ted’ for her third husband Ted Turner. Early on in the first act she describes having an aversion to her mother, who on the surface was a perfect mid-century housewife, but like many women who are stifled, was riddled with anxiety and mental illness.

Handled deftly with the privilege of hindsight, these sections not only illuminate Fonda’s life, but in a way also explore similar struggles many women of her generation felt in a country that was rapidly changing. The final act, entitled ‘Jane,’ looks at where she is now, and the all-too-human contradiction of how each of these men both impeded her and helped her grow.

A stunning profile of a complex person, ‘Jane Fonda In Five Acts’ excels at capturing all the intricacies that make us who we are and inspires us to keep working on our own unfinished self-portraits.

‘Jane Fonda In Five Acts’ is available now on HBOMax.