The talented stars from ‘Last Looks’ discuss their new movie, which also stars Mel Gibson and will be released in theaters, On Demand, and digital February 4th. 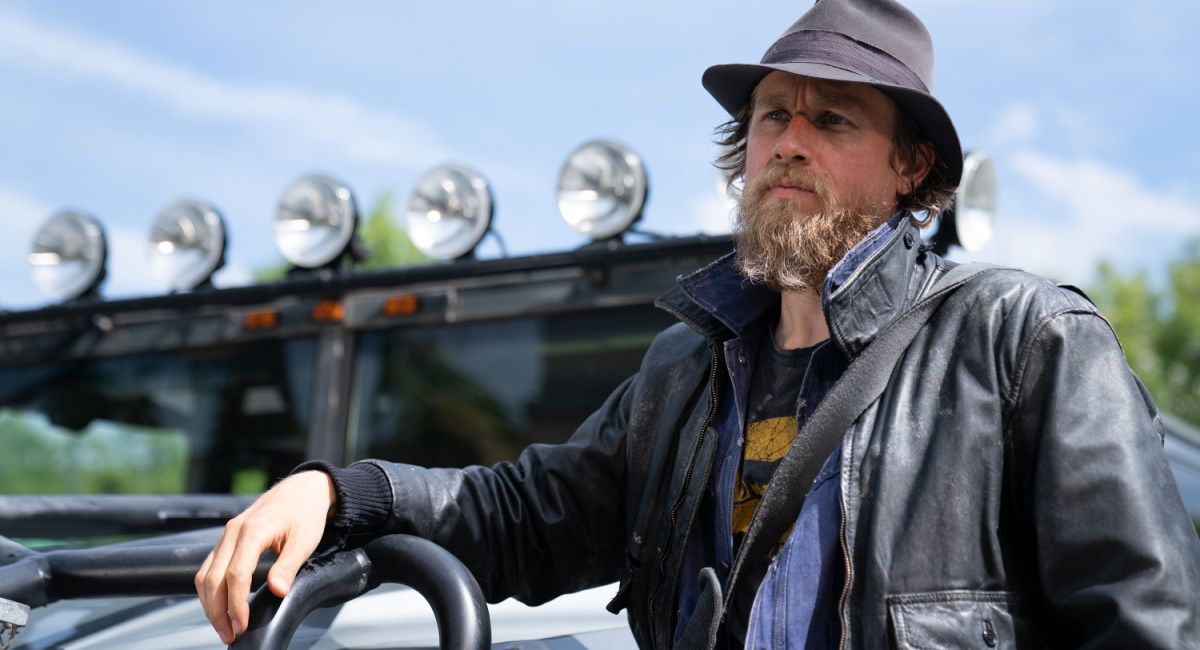 Opening in theaters On Demand, and digital beginning February 4th is the new mystery-action-comedy ‘Last Looks,’ which is based on the novel of the same name by author Howard Michael Gould.

The movie follows disgraced LAPD detective Charlie Waldo (Hunnam), who is now living life as a recluse in the woods. But when eccentric TV star Alastair Pinch’s wife is murdered, he is convinced to investigate the murder as a private investigator, and all signs are pointing to Pinch (Gibson) as the killer.

Moviefone recently had an opportunity to speak with actors Charlie Hunnam, Morena Baccarin and Lucy Fry about their work on ‘Last Looks.’ You can read a full transcript of the interviews below, or watch the interviews in the video player above.

Moviefone: To begin with, Charlie, can you talk about your character and where we find him at the beginning of the movie?

Charlie Hunnam: He is in exile. He's serving his penance up a mountain in Idlewild, which is a mountainous area outside of Los Angeles. What led him there is a mistake that he made while he was a LAPD detective.

The backstory is that he was this wonderkid detective who had this meteoric rise through the ranks of the LAPD detective unit and then realized he'd made a mistake. It's very hard to undo mistakes in the judicial system. He can't forgive himself for this mistake he's made. So, he has a little bit of a nervous breakdown and goes up the mountain to try to put his life back together.

MF: Morena, can you talk about your character’s backstory and why she seeks out Waldo’s help?

Morena Baccarin: Well, she was a big part of his life before he decided to ghost her and go up into the mountains. These two have a long history of just being crazy in love, but also having a very complicated relationship where their biggest vulnerabilities is the distrust they have for each other, that is not always founded in anything other than their own issues. So, she just can't let it rest.

I think it's both for selfish reasons and also for him. I think this case is a big deal and could really send her into PI stardom. I think also, she has this nagging feeling that something is wrong with him and that she needs to get him out of this crazy situation he's gotten himself into. So, she won't take no for an answer. She comes knocking on his door and even when he does say, "No," she does not let it happen.

MF: Lucy, when we meet your character she is working as a teacher not because she wants to be but because her parents want her to. Can you talk about that?

Lucy Fry: There was part of the story where her father is the principal of the school. Her backstory is that she has had addiction problems in the past. Her dad's tried to get her back on her feet and get her working again.

So, she's this kindergarten teacher because she wasn't actually fully qualified, but she has the family-ins to teaching at the school. But that isn't her passion, and she's looking for that thrill in whatever way she can get it.

MF: Charlie, what was your reaction to the noir elements of the screenplay when you first read it?

CH: I think that was designed by Howard Gould, the writer of this. He's a huge neo-noir fan, and he really has encyclopedic knowledge. There's not a film made in that genre that he doesn't intimately know. So, this was steeped in that.

It was interesting, how this actually happened. Howard wrote this as a spec screenplay, which means that he just wrote the idea speculatively; he wasn't writing it for a company. Then, he fell in love with Charlie and this world so much, that he actually went and wrote a novel, which bloomed into a series of novels.

So, it's interesting that this character just grew inside of Howard in that way, and he decided to change his profession from screenwriter to novelist so that he could pursue writing more of this world. So, if people like this film, hopefully we'll be able to go back and make another one of these; adapted from one of the other novels.

MF: Morena, did you have a chance to speak with Howard Gould about the script and was he able to give you any insight to your character?

MB: Yeah, we talked quite extensively, and especially on set, he was there a lot. I really enjoyed speaking to him about it. I think at one point, correct me if I'm wrong, Charlie, maybe he was developing it as a series as well; a TV series.

There were a lot of incarnations of these characters. He just was really helpful discussing tone and how to in the book, when you're reading, it's just right there on the page, and it's so easy to imagine the film noir aspect of it.

But when you're doing it adapted, and it's also present day, and you're dealing with Hollywood and all these things, you can lose some of that grittiness. So, it was really helpful to have him around to discuss the tone of the piece.

Then, he paid me the biggest compliment ever, because he was starting to write his other book and he said, "I can't get you out of the character now." I'm like, great. It means I've done my job. So, it was a really nice marrying of the two worlds. I very much dove deep, read all the books and really enjoyed getting to know the character.

Dianna Agron Talks ‘As They Made Us’