‘The Morning Show’ and ‘Goliath’ actor discusses his new series based on the beloved children’s picture book. 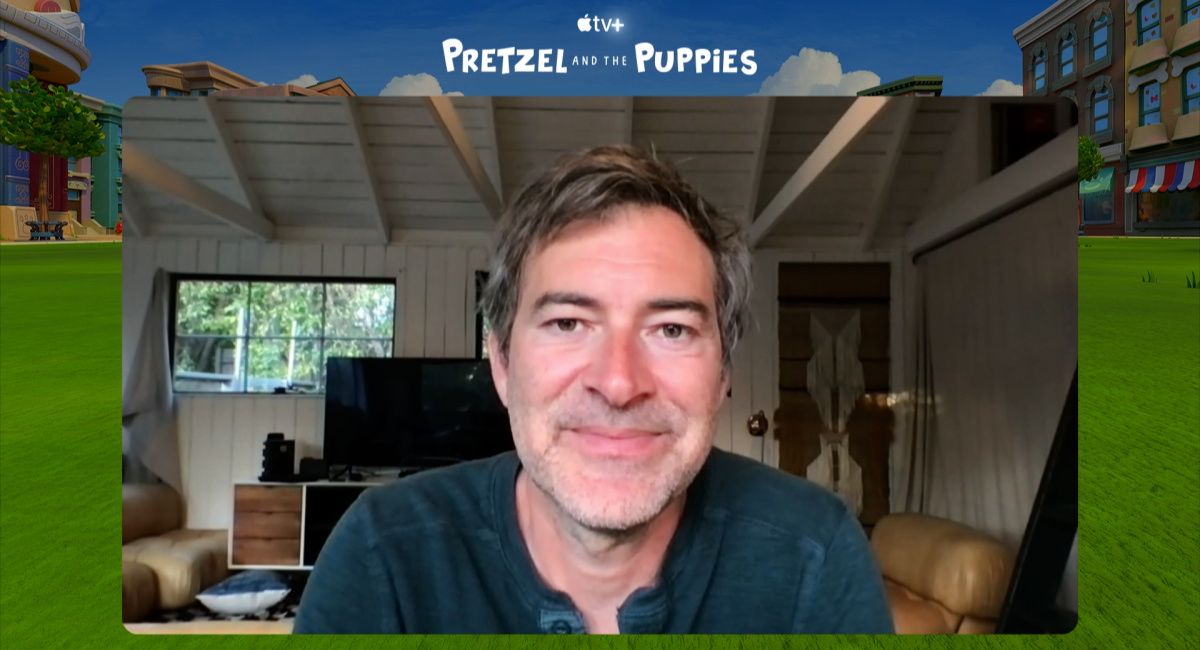 Mark Duplass in Apple TV+'s 'Pretzel And The Puppies.'

Premiering on Apple TV+ beginning February 11th is the new 3D-animated series ‘Pretzel And The Puppies,’ which is based on the beloved 1944 children’s picture book written by Margret Rey and illustrated by H.A. Rey.

Moviefone recently had the pleasure of speaking with Mark Duplass about his work on ‘Pretzel And The Puppies.’

You can read the full transcript of our interview with Mark Duplass below or watch the video of the interview in the player above.

Moviefone: To begin with, were you familiar with the source material before you signed on to this project?

Mark Duplass: So, I was very familiar with 'Curious George' and I had read this book when I was little. I don't know where it came from, but it ended up in our library. But honestly, I had totally forgotten about it. As I've talked to people, they've had a very similar experience where they say, “’Pretzel and the Puppies,’ I don't know what that is." Then they see the book and it is a recall from somewhere in their childhood.

MF: When you received the offer to be Pretzel, what was your reaction?

MD: I haven't really done a lot of voiceover at work. I play a voice on the show ‘Big Mouth,’ which is very different from this content. But I watched a lot of children's shows as a dad, and my girls are now older. I sort of missed it. You know? I missed that early morning snuggle as much as I was exhausted and filling myself with coffee at the time.

The second thing that really drew me into this show is that it is a really cute, funny show about the longest dog in the world, his five puppies and his relationship with his wife, Greta. But there's this really sweet community aspect to this show, which I hadn't seen in a lot of the younger kid shows or family-oriented shows, which is how do I be a good citizen? How do I be a good member of the community at large? We spend so much time as life gets hard trying to sustain ourselves and our own family unit. But I like that this extended beyond that and it felt fresh.

MF: The series takes place in a world where humans do not exist, can you talk about that?

MD: Yes. They are living in the city of Muttgomery, which is a small town. I like that as well. It's very immersive in that way and real sweet.

MF: Pretzel is a very modern dad. What was it like to play a character like that?

MD: He is a modern dad. You know? He's a stay-at-home dad, and it's certainly not the first time we've seen that portrayed on television, but there's an element of the way that he parents his kids that I really appreciate. I wish I had watched this before I parented my kids because he gets them out into the world, and they find themselves in these little conundrums and little situations, and he really lets his kids lead and try to figure out what the solutions can be as opposed to being a didactic dad or saying, "This is how you do it."

Because we all feel the pressure to teach our kids, but the model in which Pretzel teaches his kids is very gentle, very open, and lets them explore and make mistakes. He just supports them, and if they get too far out of bounds, he guides them back in. I think it's a nice way to parent.

MF: Not only does Pretzel teach his children good lessons, but he does it in a fun way. Can you talk about that?

MD: Yes. And I want to be clear to all other stay-at-home dads. Don't feel the pressure to be as fun and patient as Pretzel because listen, he's a dog, he's a character. He's perfect. But if you can get like halfway there and then be grumpy the other 50% of the time, you're doing great.

MF: Can you talk about how you approached creating the voice for Pretzel?

MD: It's a collaboration with the group and in particular with (show creator) Steve Altiere, who really is one of the leaders of this show. They showed me some sketches and they gave me some key words that they felt were fun for Pretzel. He's fun, he's bouncy, and he is a little jazzy.

I sort of ingested those and really tried to stay close to home for me and my natural voice but give it some of those more heightened qualities that not only work for animation, but I feel work in particular for a kid's show. So, it was really that and I tried not to make it too cartoonish and keep it somewhat natural because that's just more of my preference.

MF: Can you talk about recording your performance at home during the pandemic?

MD: Yes. I recorded the entire show pretty much with my back inside of my closet, often with a blanket over my head for sound muffling and protection through an internet connection just like this with my kids in the other room. I haven't even met some of my other cast members yet. So, it was a really wild experience. It was really fun. It was a really fun thing to do during the pandemic. There wasn't a lot of production that could be done. So, this one was very practical because it was all remote.

Mark Duplass as Pretzel in Apple TV+'s ‘Pretzel And The Puppies.'