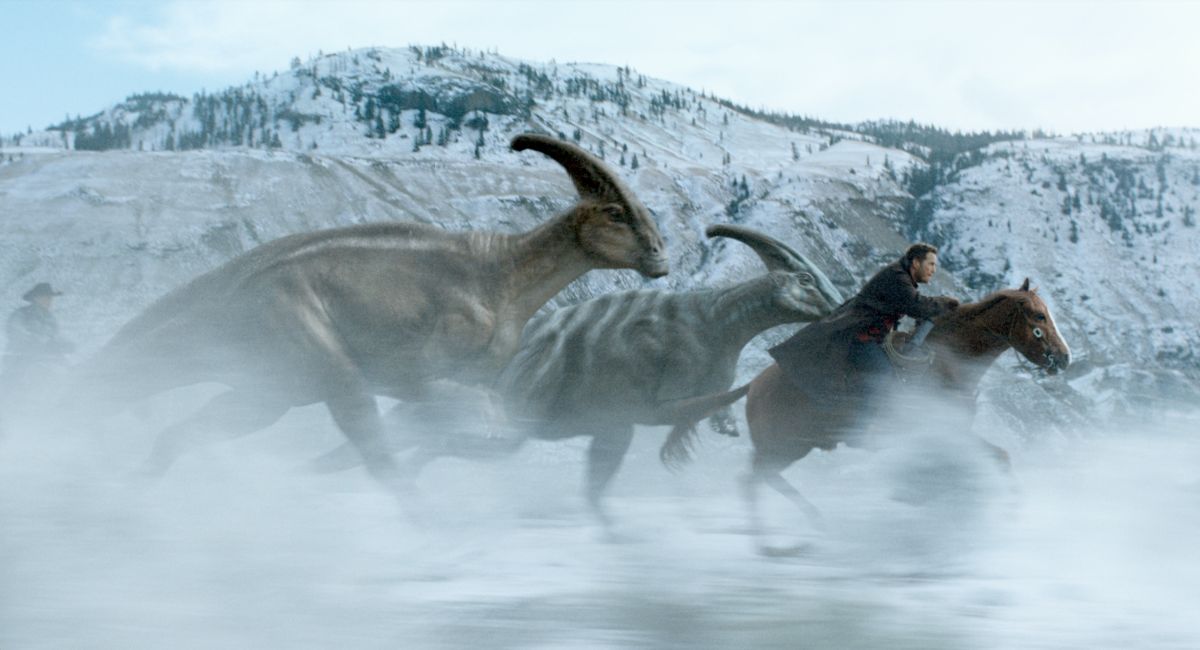 Wrapping up Universal’s sprawling presentation at CinemaCon yesterday, ‘Jurassic World Dominion’ is naturally a huge priority for the company. And now, to mark tickets going on sale for the latest dinosaur-filled movie, the latest full trailer is online.

In keeping with the scale of other footage from the movie, this is suitably epic and sweeping, promising new vistas and settings as the story expands far beyond Isla Nublar or even the locations of ‘Jurassic World: Fallen Kingdom’.

And ‘Dominion’ also follows up the plotline of that move – with dinosaurs now on the loose in America and around the world, humanity is having to adapt to living among the giant reptiles.

This naturally causes some major problems; as Jeff Goldblum’s Ian Malcolm says, “the doomsday clock might be about out of time” – and it’s partly been up to the likes of Owen Grady (Chris Pratt) and Claire Dearing (Bryce Dallas Howard) to help keep track of it all.

One big story point here is that “trained” (you know, as far as raptors can be) velociraptor Blue has had a child, Beta. It’s not long before the kid is dino-napped, and Owen and Claire must team up with classic ‘Jurassic Park’ trio Dr. Alan Grant (Sam Neill), Dr. Ellie Sattler (Laura Dern) and Goldblum’s Malcolm to find it. Cue much mockery of Owen when he admits he “made a promise” to Blue that he’ll bring back the baby.

There’s also plenty of nostalgia fuel besides the presence of Neill, Dern, and Goldblum – shots that offer callbacks to the ‘Jurassic’ movie that kicked off the entire franchise.

And if you, somewhat naturally, come to these movies expecting all the dinosaur encounters you can handle, ‘Dominion’ certainly appears to deliver, with the Mosasaurus snacking on ships in the ocean, Pratt trying to outrun Atrociraptors that are hunting him down as he speeds through the streets of Malta on a motorcycle.

Among the other critters we can expect to see? The flying Quetzalcoatlus, the huge Dreadnoughtus, the feathered Pyroraptor and, of course the big new carnivore, the Giganotosaurus.

On the human front, the cast also features the returning likes of Daniella Pineda, Justice Smith, and Omar Sy. Then there’s franchise veteran BD Wong as Dr. Henry Wu, who appears to be having some regrets about his part in all the genetic tinkering.

Campbell Scott plays the scheming Dr. Lewis Dodgson, employee of rival company Biosyn, who was seen in ‘Jurassic Park’ assayed by someone else. DeWanda Wise and Mamoudou Athie are among the new faces here.

‘Jurassic World’ director Colin Trevorrow returns for this trilogy capper, having written the script with Emily Carmichael and overcoming all manner of pandemic challenges to shoot the movie on several different continents.

Running to a suitably dinosaur-sized two hours and 46 minutes, ‘Jurassic World Dominion’ crashes its way into theaters on June 10th.