The co-writers of ‘Lake Bodom’ discuss their new psychological thriller. 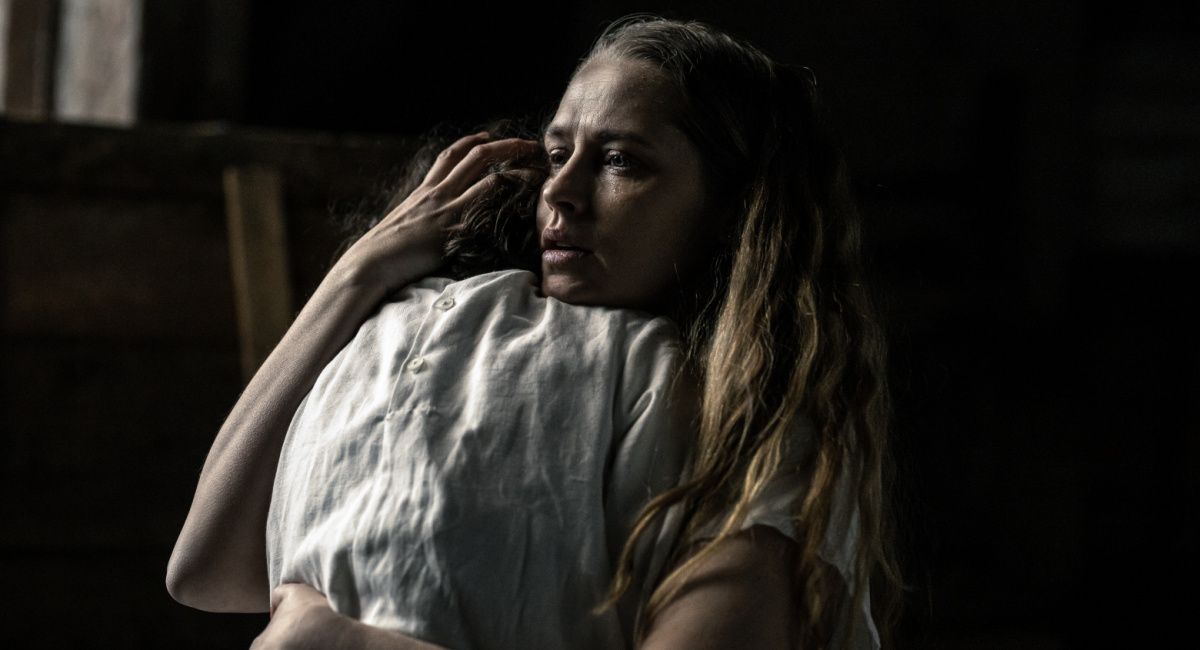 (L to R) Tristan Ruggeri as Elliot and Teresa Palmer as Rachel in 'The Twin.' Photo Credit: Heikki Leis/Shudder.

Opening in theaters, On Demand, digital, and streaming exclusively on Shudder beginning May 6th is the new psychological horror thriller ‘The Twin,’ which was co-written and directed by Taneli Mustonen (‘Lake Bodom’).

Co-written and produced by Aleksi Hyvarinen, the film revolves around Rachel (Teresa Palmer) and Anthony (Steven Cree) who movie their family from the United States to Anthony’s birthplace of Finland, after a tragedy that kills their young son, Nathan (Tristan Ruggeri). Following the move, his surviving twin brother Elliot (Ruggeri) begins to communicate with his deceased sibling.

Moviefone recently had the pleasure of speaking with director and co-writer Taneli Mustonen and producer and co-writer Aleksi Hyvarinen about their work on ‘The Twin.’

You can read our full interview with Taneli Mustonen and Aleski Hyvarinen below or watch our interviews with Mustonen, Hyvarinen, and actress Teresa Palmer by clicking on the video player above.

Moviefone: To begin with, what can you tell us about your writing process together and how you broke the story for this movie?

Taneli Mustonen: Oh, wonderful question. We met in film school and actually Aleksi wrote my first feature. It was a family film. So, we started from there and we've been working, running our company together ever since then. With this particular film, after "Lake Bodom", we wanted to write something bit more adult-themed. Basically, we wanted to create a really proper character study in a horror film, because ‘Lake Bodom’ for us was trying to come up with something new in the slasher genre that we really love. Then with this, we wanted to pay homage to those awesome films from the '70s and early '80s like ‘Don't Look Now,’ 'The Omen’ or ‘The Changeling’ by the wonderful Peter Medak.

So, we started from there. But basically, as parents, we wanted to really write a story about what grief can cost you, especially when losing one's child, and that's every parent's worst nightmare. We noticed that in many horror films nowadays, it seems that tragic loss is usually used as a setup, but we wanted to really focus the story on creating a scary adventure ride, but really deal with the fact of what losing your child can do to you.

(L to R) Co-writer and director Taneli Mustonen and Co-writer and producer Aleksi Hyvarinen at 'The Twin' premiere at the Landmark Theatre, Los Angeles, CA.

MF: Can you talk about the idea of a mother losing her child and dealing with that grief, and how you wanted to explore that in this screenplay?

Aleksi Hyvarinen: The thing about horror as a genre is that you actually get to write and work with a story that is super entertaining in a scary way, but at the same time, you actually deal with themes and subject matter that are super archaic and deals with your ultimate fears basically. I think that's something both of us have always loved about horror, that even in "The Twin", you deal with the biggest fear of being a parent. We are both dads and obviously that was kind of the starting point for us. What is your ultimate fear as a parent? Anybody who's a parent probably that is their ultimate fear and it becomes an entertaining ride at the same time.

TM: Basically, we wanted to create horror films that paid homage to those awesome films that we grew up with and really make it the scariest thing you ever seen. That was our main focus when writing, but we really wanted to make it about the characters. Let's create complex in-depth characters and cast Teresa Palmer as the role of Rachel. She's pretty much in all of her scenes and at the same time, it felt important to us that we also drive the audience towards a certain rabbit hole, you could say.

When viewing the film, we are also asking the question, what is real and what is not? I think that those are the things that everybody can relate to, even though you don't have to be a parent to be afraid of losing your sanity. I feel it's a film that really makes you question the true nature of evil and if there's an evil entity, what would be his way of getting to you? So, those were the things we were actively doing with this one.

(L to R) Tristan Ruggeri as Elliot, and Teresa Palmer as Rachel in 'The Twin.' Photo Credit: Shudder.

MF: Can you also talk about using classic horror movie tropes to throw the audience off from what is really going on in the film?

AH: You know, I often talk about with Taneli that when you're watching a horror film, it's basically a fairy tale for adults and your kind of watching it on two levels. It's always the adult who's looking for those clues in the plot, but also finding references to the horror films we all love, which is, as I said, ‘Don't Look Now,’ Peter Medak's ‘The Changeling’ and all of those great '70s, '80s horror films that Taneli and I grew up with. So, that's one level.

The other level is you as a kid and just being scared to the bone and really living the story on that emotional level. That is something we love about horror. It also makes it fun to write. It's something we already exercised a bit in our previous horror film ‘Lake Bodom,’ introducing a character, a theme, and then flipping them around a couple times. It's a bit of fun and we just feel that it's always one of the greatest things in horror, even though it's going to be super scary and super touching, it's also a kind of a game as an audience member.

MF: Taneli, can you discuss how you planned your camera moves and your uses of shadows and light to create the unique mood and tone of the film?

TM: Thanks for pointing that out. It's definitely the case that we wanted to have the villagers and the village all together as a character on its own. So, for the visual style, we went back and re-watched our favorite films for quite some time, and also watching the films of awesome filmmakers like James Wan, and his work on ‘The Conjuring' and especially ‘Insidious.’ But also, you could say our surroundings and what we learned from ‘Lake Bodom’ was how the use of nature started working on its own. We also wanted to create this kind of isolation in the characters. Rachel is put in a very fish out of water situation. She doesn't know the language and she fears it.

When it comes to lensing and the visual styles, we also had a wonderful production designer working with us for the first time. We would love to work with her again, because as soon as we found the house and the surroundings, we shot the film in Estonia where we were working on another film, which was a comedy. Aleksi and I started talking about it and said, "Oh my God, we're walking on these locations for 'The Twin,’” and everything grew quite organically from there. But, like I said, it's one of those things that we wanted to really invite the audience to this strange world of Finland and, and I hope we pulled it off.

Teresa Palmer as Rachel in 'The Twin.' Photo Credit: Shudder.

MF: Why was Teresa Palmer the right actress to play Rachel and what did she bring to the role?

TM: We wrote the script and then it started circulating through our agents and managers back in LA and finally we got this call from Teresa’s agent, and we thought that it was one of those introductory calls. Maybe she was just thinking, does she want to do it or not? But as soon as she answered the phone, she was like, "I've read the script a couple of times now and I've been discussing it with my husband all through the night." We were blown away by her reaction. She really understood what we were aiming with the film and with the story.

I mean, it was just an amazing ride for us as filmmakers as well. From the very first take when we started to shoot, she was Rachel, and it was such an amazing creative process, which I've never had before, even though this is my sixth feature. I was learning every day from Teresa and there is a really good reason why she's as huge a star as she is.

AH: It was something we never dared to imagine. Even at times, we felt that Teresa knew her character better than we did as writers. It was amazing. Obviously, she is a mother and really kind of dove into that. We've been joking with our crew later on that there were times where all of us just basically forgot that we were shooting and ended up watching the monitor. Our focus puller basically almost forgot to pull focus. We were just lacking popcorn because it felt like a movie. It was pretty amazing.

And whenever we had a new crew member come on set, their jaws dropped, and they were just mesmerized by the performances. I have to say; the whole cast was really doing a great job. It was quite a peculiar process. We were shooting in the middle of lockdown and it became this really concentrated atmosphere and you rarely met anybody outside of the set and the crew. It was a fun experience and there was a lot of concentration on set.

MF: Finally, since you mentioned you were shooting during COVID, did the isolation of lockdown add to the mood and tone on set?

TM: For sure. It was just us and we really didn't get the chance to meet anybody else. We were basically also locked down. But we were like happy campers working on the film. We went on this journey and we created this story. Luckily, we were able to shoot so many scenes chronologically, even with our limited budget that we had. We had such amazing discussions about where we want to take the story and it took everything. As a director, you just want to encourage everybody to follow it.

There were so many moments throughout the shoot that we really connected with everybody and it felt that we were living that story. So, I would say definitely, yes, the COVID, it was a big pain in the ass, but it also contributed a lot and it made everybody focus more. So, it's an isolation horror movie in that sense, and I think it definitely worked to benefit us and the film.

Every parent's worst nightmare is just the beginning for Rachel's ordeal as in the aftermath of a tragic accident, she and her husband Anthony decide to move to... Read the Plot