Flashbacks to a simpler time. 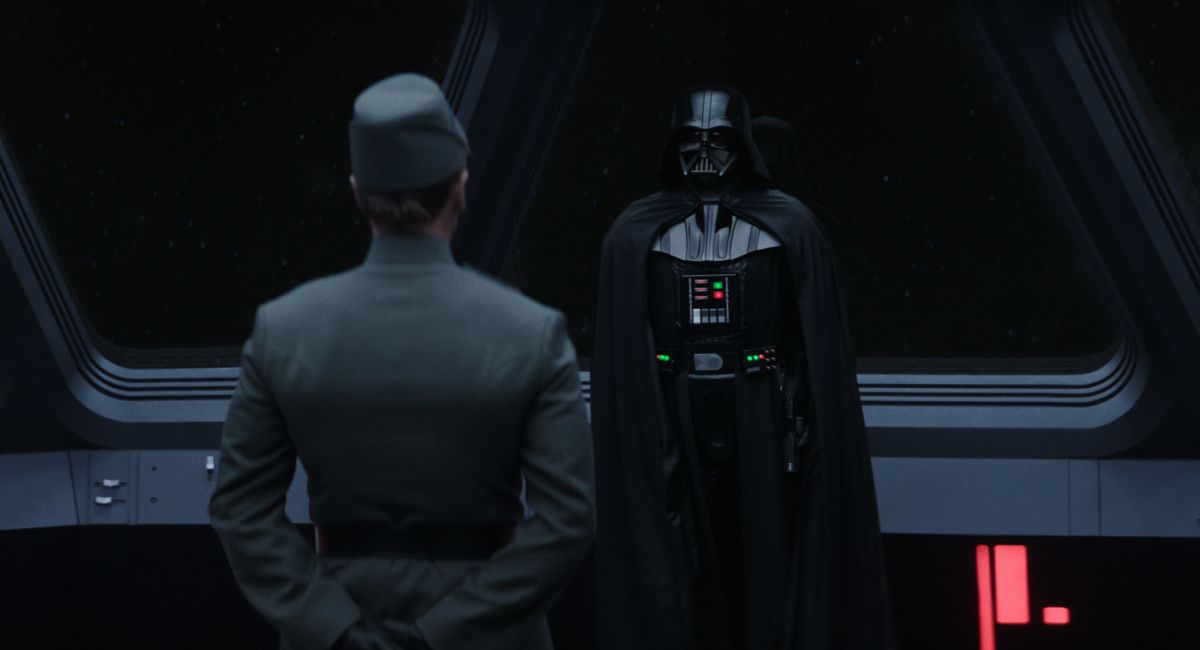 The Empire isn’t willing to let Kenobi go that easily. Welcome to the second to last episode of ‘Obi-Wan Kenobi’.

We begin with a flashback to ‘The Clone Wars’ era and see Hayden Christensen as a young Anakin Skywalker! He’s sparring with Kenobi (Ewan McGregor) to prove he’s ready to be a Jedi Master but then we’re quickly brought back to present day and now see Anakin as Darth Vader.

The rescue ship lands, and Kenobi runs into Haja (Kumail Nanjiani), who explains he’s now wanted by the empire after his confrontation with Reva. They ask Roken (O’Shea Jackson Jr.) for help getting back to Alderaan, but he explains that they need to save the refugees first.

Vader is on his way, and he is not happy. It’s revealed that the tracker Reva planted was in Leia’s droid, and she directs it remotely to close the hideaway’s doors and trap the refuges inside. Obi-Wan then confronts a wall of messages from Jedi who have previously been there, as well as a box full of lightsabers.

The droid locks down the facility, as Kenobi tells Roken that Vader “has no patients for a siege.” We’re shown another flashback, and the Empire lands on the planet. Obi-Wan takes the lead and promises everyone they will be safe if they can hold off the Empire long enough to escape. He gives Roken an hour to bypass the lockdown as the Empire prepares their attack, and Reva lands with an army of Stormtroopers.

Tala (Indira Varma) then speaks to Obi-Wan and tells him about the force sensitive families that she watched be killed, explaining how she moved from the Empire to the Resistance. “There are some things you can’t forget, but you can fight to make them better,” she explained.

Haja recommends climbing through the vent to fix the doors, and Leia (Vivien Lyra Blair) offers to help. Roken dismisses her but Kenobi orders him to let her try. He then puts Haja in charge of Leia so he can confront Reva and buy them some time. Kenobi tells the Empire that he wants to talk the Inquisitor. Reva agrees and the two meet at the door. She instantly sees through his charade and realizes that he is just stalling for time.

Kenobi then asks her how she knows Vader is Anakin. He soon realizes that Reva was a youngling during the events of Order 66 and knows what Anakin did. We are then shown a flashback revealing that Reva had to play dead to avoid being killed by Anakin.

Obi-Wan goes on to discover her big plan. Reva isn’t helping Vader, she wants to kill him and have her revenge. But she turns the tides, blaming Kenobi for Anakin’s murder spree. She strongly asserts that she needs no help, not even his, breaking the door open and fighting her way through.

The Stormtroopers break through with her, and the rebel group retreats. Leia is still in the vents attempting to get the doors open. Tala is shot but her droid protects her as she closes the hallway door to save everyone else, before sacrificing herself by setting off an explosive to slow the attack.

Vader tells Reva remotely to stand down, as we get another flashback to Anakin’s Jedi test. Kenobi realizes that Anakin is expecting him to surrender, and once again leaves Leia with Haja to keep her safe, while giving himself up to the Empire.

Obi-Wan informs Reva that she isn’t bringing him to Vader, but that he’s bringing Vader to her! He tells her about the refuges and asks if Reva is really going to let Vader slaughter innocent people again, offering to help her end it together. Considering his offer, Reva questions if Vader will see it coming. Kenobi replies “all he’ll see is me.”

In the flashback, Anakin downs Kenobi as he explains how the young man’s need for victory blinds him. In the present, Vader lands on the planet and goes to get his old Master.

Back in the air vent, Leia finds the broken piece and gets attacked by Lola, freeing her from the empire’s control, while Vader enters the base. Leia gets the doors open and is reunited with Kenobi, as he has escaped from the Empire. A transport goes to leave, and Vader stops it, breaking it open in a rage to find Obi-Wan, only to discover that it was a distraction, as the real ship flies away.

In the flashback, Anakin finally loses to Obi-Wan, with his Master saying, "You are a great warrior Anakin, but your need to prove yourself is your undoing. Until you overcome it, a Padawan you will still be."

Back in the present, Reva is ready to end Vader’s life until he stops her cold, revealing that he knew of her plans and blames Kenobi for using her. They fight, but she is no match for Vader, as he tosses her a blade, so they can duel it out fair and square.

But Vader gets the upper hand as Reva flashes back to when he attacked her friends during Order 66. Vader defeats Reva, leaving her gravely injured, as it is revealed that the Grand Inquisitor is still alive and working with Vader to reveal Reva’s true intentions.

Kenobi and the rebels get away, as we see Reva still fighting for her life, and discovering the message Bail Organa left for Kenobi, revealing Luke Skywalker. Back on the ship, Kenobi senses that something is wrong. The scene then cuts to Tatooine and a sleeping Luke. Fade to black.

Director Deborah Chow made a brilliant choice to use the flashback to the prequels in this episode. Not only did we get to see Hayden Christensen back in his old Jedi robe and wielding his lightsaber, but we also saw Ewan McGregor with his famous mullet!

But fan service aside, the use of that flashback was to illustrate the seemingly never-ending battle between good and evil through Anakin and Obi-Wan’s long relationship, as it was playing out in real time. While yes, we saw it as a memory, it still got its point across.

Without that choice, we would just have a back and forth between Master and Apprentice, neither of them literally in the same room! It shows the audience a time when the two were (relatively) friendly, but also giving us hints of what’s to come in this series.

Like in the flashback, Anakin is impulsive and full of anger. While this is obvious to longtime fans of the franchise, it shows how little he has changed in the long run. Not counting the missing limbs.

Order 66 as seen in 'Star Wars: Episode III - Revenge of the Sith.'

But it’s not just Anakin’s flashback that we see in this episode. Reva gets the same treatment, as we’re shown a firsthand account of Order 66, when Anakin completely turned to the dark side. The parallels of her trauma as well as Kenobi’s, while different, are nearly one in the same.

Reva lost her family in the Jedi order, just as Anakin lost his Master in his welcoming of the dark side. While I wouldn’t say that her path parallel’s Anakin’s, she does what he seemingly cannot, which is fight back!

We only have one episode left of ‘Obi-Won Kenobi’ and so much more can still happen.

See you all next week for the finale!