The ‘Burn Notice’ star discusses his latest movie, as well as his new role on ‘Law & Order’ and the possibility of a third ‘Sicario.’ 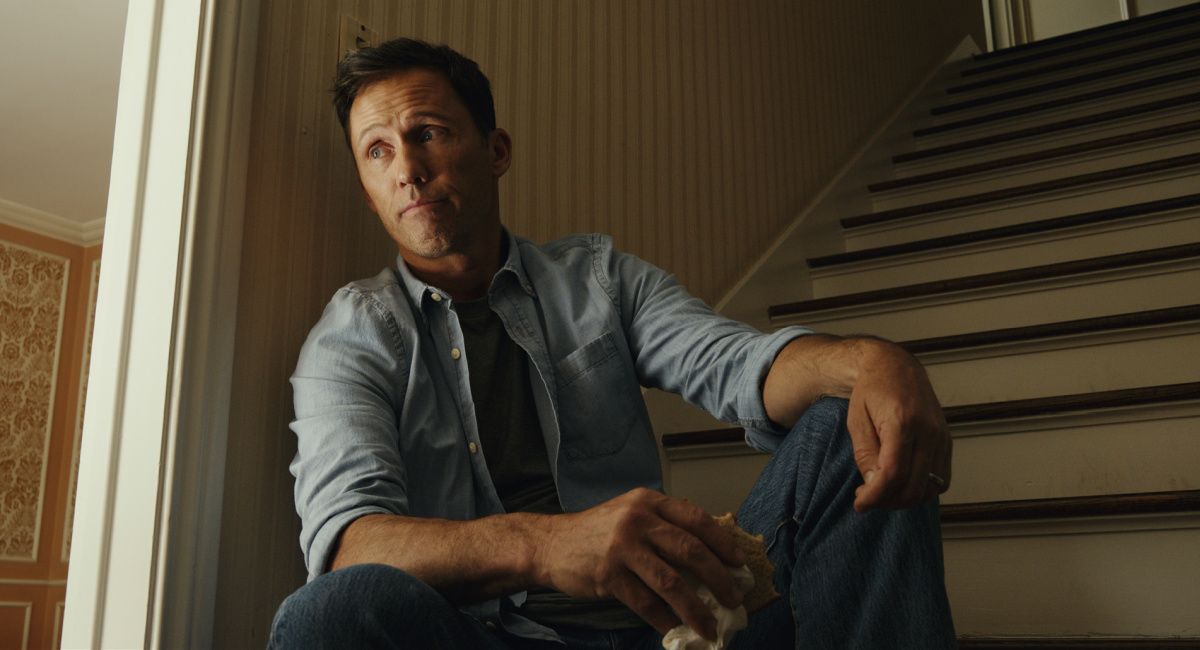 Opening in theaters and On Demand beginning June 17th is the new coming of age film ‘First Love,’ from director A.J. Edwards (‘The Better Angels’).

Set in 2008, the film follows Jim (Hero Fiennes Tiffin), a senior in high school experiencing the highs and lows of his first love with Ann (Sydney Park) as they navigate their pending departure to college. At the same time, Jim’s parents, Greg (Jeffrey Donovan) and Kay (Diane Kruger) are dealing with the financial crisis after Greg loses his job.

Actor Jeffrey Donovan has appeared in dozens of popular movies including ‘Sleepers,’ ‘Hitch,’ ‘Changeling,’ ‘J. Edgar,’ ‘LBJ,’ ‘Sicario,’ ‘Sicario: Day of the Soldado,’ ‘Let Him Go,’ and ‘Wrath of Man.’ He has worked with such luminary filmmakers as Barry Levinson, Rob Reiner, Denis Villeneuve, Guy Ritchie, and Clint Eastwood.

But Donovan is probably most recognizable from his TV work, which includes appearances on ‘Touching Evil,’ ‘Crossing Jordan,’ and ‘Fargo,’ as well as starring as Michael Westen on USA’s hit series ‘Burn Notice.’ He currently plays Detective Frank Cosgrove on NBC’s ‘Law & Order.’

Moviefone recently had the pleasure of speaking with Jeffrey Donovan about his work on ‘First Love,’ as well as ‘Law & Order’ and the possibility of a third ‘Sicario.’

You can read our full interview with Jeffrey Donovan below or click on the video player above to watch our interviews with Donavan and Hero Fiennes Tiffin.

Moviefone: To begin with, it seems like you are everywhere right now. You just finished your first season on ‘Law & Order,’ you have ‘First Love’ coming out, and I just saw the movie you did with Jason Statham and Guy Ritchie last year.

Jeffrey Donovan: Oh, ‘Wrath of Man.’ That was a lot of fun. I've been very fortunate to work with some great directors, Clint Eastwood, Rob Reiner and Barry Levinson. All these epic, prolific directors, but that was such a cool thing to do, to be in a Guy Ritchie movie. And with Jason Statham. I had so much fun. We shot it across the pond. I landed January 18th, 2020. Then the world shut down. It was crazy. It was the last film I did pre-pandemic.

MF: How did you get involved in ‘First Love’ and what was your first reaction to reading the screenplay?

JD: My agent sent it to me because a colleague of his represents Hero and said, "Hero really likes this" I didn't know who Hero was. Now I do, good God, what a talent and what a presence, what a great young actor. A.J. and Diane had kind of been looking around for the dad. I guess someone brought me up to them, and they looked at my work and they sent it over to me. I immediately just was struck by the tone being very specific about that time period.

I remember that time period because it was actually when I began ‘Burn Notice.’ It was a paradox for me because my career was just blossoming through ‘Burn Notice’ and the country was going down. It caused this huge conflicting struggle for me going, "I've never been happier in such a sad country." So, I remember that time period. I remembered it and I just tapped into that general malaise of how people were so despondent, so crushed by the economy and the real estate bubble bursting. I thought it would be an interesting thing to explore.

MF: The movie takes place during the 2008 financial crisis, but coming out of the Pandemic, a lot of people lost their jobs too. Do you think in a way now was the right time for this movie to come out because so many people can relate to what you character in going through in the film?

JD: Sadly, it's serendipitous of this time with the economy and the inflation, but as you see, it does come in cycles. It went down, it went back up, we had a huge growth, and it will go down again. So, as we know, it's going to rebound, but I think that people will respond because it’s not like a Hollywood movie. It's just not, life is not like that.

‘First Love’ is far more nuanced and complex, and it takes years. I don't think you see a lot of movies that show the complexity of riding that wave of success and that failure. I think that's what's beautiful about the film is that it shows first love literally between two young people. Then what does first love look like 20 years later? I don't think there's a lot of movies that show that, and that's what drew me to it, and obviously to share the screen with the amazing Diane Kruger.

MF: Can you talk about how Frank deals with losing his job and the affect it has on his family and his marriage?

JD: It's not that complex to say that men typically feel like they have to be the breadwinner, not necessarily they are the bread winner. But they feel like they have to be. Then it's a trope. It's an old, archaic way of thinking. He still has that because he grew up in a very Orthodox faith with the patriarch role being very stereotypical. It destroys his masculinity. It destroys his sense of self and his sense of worth. I think that wonderful dinner scene with his brother needling him is just kind of endemic of that, "Hey, you're not towing the line just like me. We're all just kind of sinking in this boat."

For Diane's character to kind of rise up and say, "You know what? We're a partnership. We're 50-50. This isn't all on you." It takes so many slaps in his face to go, "It's not like what you imagine, that fabric that you're kind of holding onto. It doesn't really exist." So, I thought that was really kind of fascinating to explore.

MF: What was it like for you to work with Diane Kruger and explore that relationship and dynamic with her on screen?

JD: Well, it was easy in the sense that every time she walked on set, I went, "Oh my God, she's such an amazing actress." But also, Diane's a very intelligent, a very 21st century modern woman who understands that there is no such thing as the male or female role. They’re our roles. They’re ours.

It's as a team and being married with children, you realize that this is your job. This is my job in our relationship. She feels the same way with her partner. It's our job. It's our job to raise our child. It's our job to provide. So, we felt very simpatico in that. She was just luminous in the role. I mean, I can't say enough about her.

MF: Can you talk about working with the young actors in the film, Hero Fiennes Tiffin and Sydney Park? Did you find yourself having any parental pride for them on set when you saw what strong performances they were each giving?

JD: I did. It was it was unconscious because I was like, "Look at these two young brilliant actors tearing it up with not a fear in the world. I wish I was that young and confident." I was like, "Oh my God. These two young fine actors are just so immensely, confident and brilliant in their roles.”

I think it's good what you don't know. I don't think they knew how hard what they were doing was, and they did it so seamlessly. I'm glad you appreciate what they did because it's so difficult to do. I think that a lot of the film relies on looks, glances and smiles, and that's all organic stuff that was just created by them. It was really great.

MF: You’ve worked with many great directors throughout your career, can you talk about working with A.J. Edwards, and do you find it helpful when the director is also the writer on a project?

JD: I've been lucky to play in an arena that runs the gamut, right. Clint is very like, "It's on the page, say it." One take move on. My first film was with Barry Levinson, who just was like, "Oh yeah, maybe that, maybe something else. Do something." Then with Guy Ritchie who would have the script and he would come out of his trailer an hour after we got there and say, "Here's the new pages." He rewrote them in an hour and we would all act them throughout the day. He's been doing that since he began his career.

So, with A.J., we were lucky to have rehearsal for the first week before shooting, which is such a luxury on a small budgeted film like this. We went through line by line, even word by word with Diane, me, and even Hero. We worked it through so that we found nuances that A.J. appreciated, and we were very appreciative of him to be able to let us have that kind of room to grow in these roles.

MF: As an actor, what was it like for you to join ‘Law & Order’ this season and work with an amazing cast that includes Anthony Anderson and Camryn Manheim?

JD: Yeah and Sam (Waterson), Hugh (Dancy) and Odelya (Halevi). There's also been the guest stars. I mean, we're so lucky. We have the cream of the crop from New York City actors showing up every week. Look, it's the mothership. It's no secret. I'm the biggest geek fan of ‘Law & Order.’ Everyone knows it. I know every episode. I was a fan of the mothership and I used to watch it after college. I'd come home on Thursday nights and I would watch it very late at night.

It's an honor. People can say that a lot, but for a franchise that Dick Wolf created 30 years ago, to be a part of that, to be a banner for NBC and to be walking down those courtroom steps or police squad steps, it's a true honor. I'm blessed. I told this to the crew when we wrapped season one, I said, "I absolutely love showing up to work every day." It's very rare that you can say that about a job. Every single day I love showing up. So, it's been great.

MF: Finally, have you heard any more talk about a third ‘Sicario’ and is that a character you would like to revisit?

Until then, I'm sorry. I have no idea. It's all quiet on the ‘Sicario’ front. But I know that Josh (Brolin) and Benicio (del Toro) are huge fans of it. I know Emily (Blunt) enjoyed her time in the first one. So, I think we're all game, but I just don't know. I had an amazing time. I would love to be in the third installment, but we'll see.