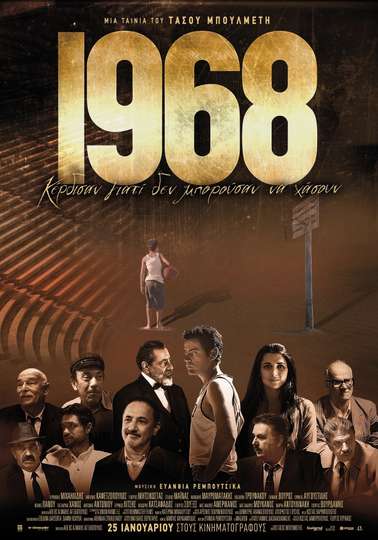 Fancy watching '1968' on your TV or mobile device at home? Finding a streaming service to buy, rent, download, or view the Tassos Boulmetis-directed movie via subscription can be difficult, so we here at Moviefone want to do the heavy lifting.

We've listed a number of streaming and cable services - including rental, purchase, and subscription choices - along with the availability of '1968' on each platform. Now, before we get into all the details of how you can watch '1968' right now, here are some details about the Onion Films, AEK B.C. documentary flick.

Released , '1968' stars Antonis Kafetzopoulos, Stelios Mainas, Errikos Litsis, Themis Panou The movie has a runtime of about 1 hr 33 min, and received a user score of 64 (out of 100) on TMDb, which collated reviews from 10 well-known users.

You probably already know what the movie's about, but just in case... Here's the plot: "A.E.K., the well-known Greek basketball team founded in 1924 by refugees from Constantinople, after 44 years, beats SLAVIA of Prague and wins the European Cup."

'1968' is currently available to rent, purchase, or stream via subscription on Amazon Video, YouTube, Apple iTunes, and Google Play Movies .