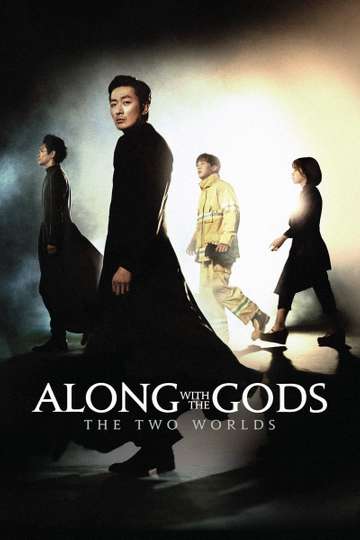 Along with the Gods: The Two Worlds (2017)Stream and Watch Online

Looking to watch 'Along with the Gods: The Two Worlds' in the comfort of your own home? Discovering a streaming service to buy, rent, download, or view the Kim Yong-hwa-directed movie via subscription can be confusing, so we here at Moviefone want to help you out.

Released December 22nd, 2017, 'Along with the Gods: The Two Worlds' stars Ha Jung-woo, Cha Tae-hyun, Ju Ji-hoon, Kim Hyang-gi The NR movie has a runtime of about 2 hr 19 min, and received a user score of 81 (out of 100) on TMDb, which assembled reviews from 663 experienced users.

What, so now you want to know what the movie's about? Here's the plot: "Having died unexpectedly, firefighter Ja-hong is taken to the afterlife by 3 afterlife guardians. Only when he passes 7 trials over 49 days and proves he was innocent in human life, he’s able to reincarnate, and his 3 afterlife guardians are by his side to defend him in trial."

Movies Like Along with the Gods: The Two Worlds

The Man from Nowhere
"Nothing to lose, nothing to compromise."
The Thieves
"All For The Money. One For The Revenge. Every Man For Himself."
Along with the Gods: The Last 49 Days
"Unveiling millennium-old secrets."
The Last Princess
"Based on the true story of the last princess of the last empire."
The Amazing Screw-On Head
"Put the screw to villainy."
Assassination
"The country falls. The operation begins."
Love 911
"A day to heal, a day to love."
Windstruck
"If only I can feel you... even as the wind."
Ode To My Father
"One promise can shape a lifetime."
The Outlaws
"Kickstarting a plan to mop up the mob in one clean sweep!"
Cold Eyes
"Remember everything about the untraceable target."
Masquerade
"15 days lost to history."
Miracle in Cell No. 7
"If caught, they're all doomed!"
Tazza: The High Rollers
"War of flowers."
The Admiral: Roaring Currents
"12 ships against a fleet of 330."
200 Pounds Beauty
"Does beauty tell your fate or what?"
The Spectacular Spider-Man Attack of the Lizard
"If you are a Spidey fan, you will not want to miss this!"
A Taxi Driver
"Based on true events, an untold story of a taxi driver."
Veteran
"The unstoppable. The untouchable."
The Face Reader
"Look Fate in the Face"
Christmas in August
"Is Love Eternal?"