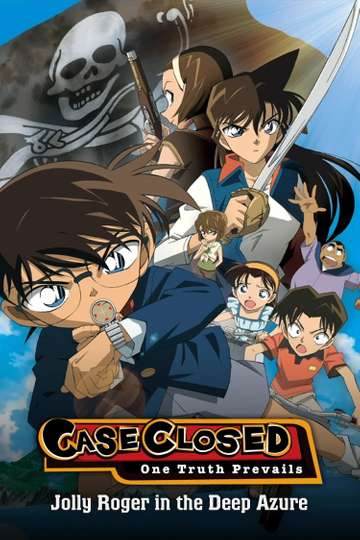 Want to behold the glory that is 'Detective Conan: Jolly Roger in the Deep Azure' on your TV, phone, or tablet? Finding a streaming service to buy, rent, download, or watch the Yasuichiro Yamamoto-directed movie via subscription can be difficult, so we here at Moviefone want to take the pressure off.

Released April 21st, 2007, 'Detective Conan: Jolly Roger in the Deep Azure' stars Minami Takayama, Wakana Yamazaki, Kappei Yamaguchi, Akira Kamiya The PG-13 movie has a runtime of about 1 hr 50 min, and received a user score of 66 (out of 100) on TMDb, which put together reviews from 100 experienced users.

You probably already know what the movie's about, but just in case... Here's the plot: "The Isle of Koumi, a beautiful island in the Pacific Ocean. On the island, people pass an old legend down from generation to generation that there was the Seabed Palace, an ancient ruin at the bottom of the sea, where the treasure of 2 female pirates, Anne Bonnie & Mary Reed (who really existed 300 years ago), was left. When Conan and his friends visit Koumi Island while on vacation, they meet some treasure hunters. There was something suspicious about them." .

Movies Like Detective Conan: Jolly Roger in the Deep Azure