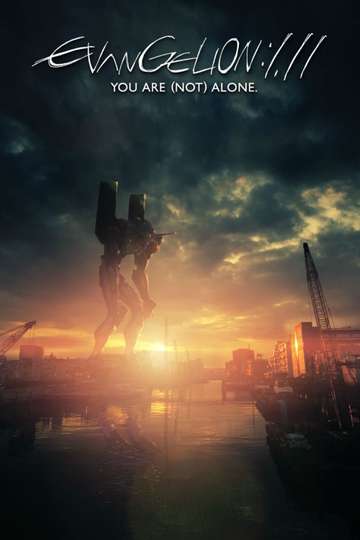 Looking to watch 'Evangelion: 1.0 You Are (Not) Alone' on your TV or mobile device at home? Searching for a streaming service to buy, rent, download, or view the Hideaki Anno-directed movie via subscription can be a huge pain, so we here at Moviefone want to help you out.

We've listed a number of streaming and cable services - including rental, purchase, and subscription options - along with the availability of 'Evangelion: 1.0 You Are (Not) Alone' on each platform. Now, before we get into the fundamentals of how you can watch 'Evangelion: 1.0 You Are (Not) Alone' right now, here are some specifics about the khara science fiction flick.

Released November 17th, 2009, 'Evangelion: 1.0 You Are (Not) Alone' stars Megumi Ogata, Megumi Hayashibara, Kotono Mitsuishi, Yuriko Yamaguchi The movie has a runtime of about 1 hr 41 min, and received a user score of 77 (out of 100) on TMDb, which collated reviews from 556 respected users.

Want to know what the movie's about? Here's the plot: "After the Second Impact, Tokyo-3 is being attacked by giant monsters called Angels that seek to eradicate humankind. The child Shinji's objective is to fight the Angels by piloting one of the mysterious Evangelion mecha units. A remake of the first six episodes of GAINAX's famous 1996 anime series. The film was retitled "Evangelion: 1.01" for its home video version and "Evangelion: 1.11" for a release with additional scenes."

'Evangelion: 1.0 You Are (Not) Alone' is currently available to rent, purchase, or stream via subscription on Amazon Prime Video .

Royal Space Force - The Wings Of Honneamise
On a future Earth, war between the Kingdom of Honneamise and its rival...

Voices of a Distant Star
It is 2046 when a mysterious alien force begins their annihilation of...

Neon Genesis Evangelion: The End of Evangelion
The second of two theatrically released follow-ups to the Neon Genesis...

Ghost in the Shell
In the year 2029, the barriers of our world have been broken down by t...

Evangelion: 3.0+1.0 Thrice Upon a Time
In the aftermath of the Fourth Impact, stranded without their Evangeli...