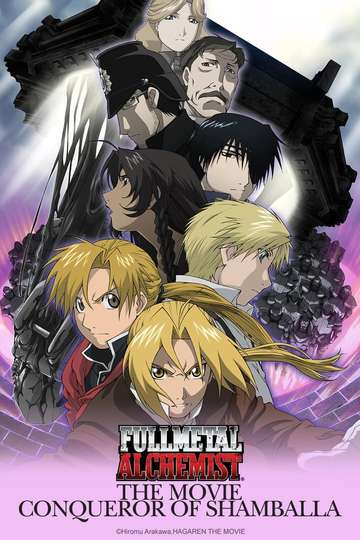 Looking to watch 'Fullmetal Alchemist The Movie: Conqueror of Shamballa' on your TV or mobile device at home? Discovering a streaming service to buy, rent, download, or view the Seiji Mizushima-directed movie via subscription can be tricky, so we here at Moviefone want to do right by you.

Below, you’ll find a number of top-tier streaming and cable services - including rental, purchase, and subscription choices - along with the availability of 'Fullmetal Alchemist The Movie: Conqueror of Shamballa' on each platform. Now, before we get into all the details of how you can watch 'Fullmetal Alchemist The Movie: Conqueror of Shamballa' right now, here are some particulars about the Square Enix, TBS, Aniplex, Nippon Shuppan Hanbai (Nippan) K.K., MBS, SKY Perfect Broadcasting, BONES, Shochiku, DENTSU adventure flick.

Released August 24th, 2006, 'Fullmetal Alchemist The Movie: Conqueror of Shamballa' stars Romi Park, Rie Kugimiya, Toru Okawa, Megumi Toyoguchi The PG-13 movie has a runtime of about 1 hr 45 min, and received a user score of 72 (out of 100) on TMDb, which put together reviews from 239 experienced users.

Want to know what the movie's about? Here's the plot: "Munich, Germany, 1923. Two years have passed since Edward Elric was dragged from his own world to ours, leaving behind his country, his friends and his younger brother, Alphonse. Stripped of his alchemical powers, he has been all this time researching rocketry together with Alphonse Heiderich, a young man who resembles his own brother, hoping to one day find a way back home. His efforts so far had proven fruitless, but after lending a hand to a troubled gipsy girl, Edward is thrown in a series of events that can wreak havoc in both worlds. Meanwhile, at his own world, Alphonse Elric ventures deeper into the mysteries of alchemy in search for a way to reunite with his older brother."

'Fullmetal Alchemist The Movie: Conqueror of Shamballa' is currently available to rent, purchase, or stream via subscription on VRV .

Movies Like Fullmetal Alchemist The Movie: Conqueror of Shamballa

Pale Cocoon
In the far future when the continuity of the history has been lost, hu...

Fullmetal Alchemist The Movie: The Sacred Star of Milos
After a mysterious prisoner with only a few weeks left on his sentence...

Steins;Gate: The Movie âˆ’ Load Region of DÃ©jÃ  Vu
One year after the events of the anime, Rintarou begins to feel the re...

Fullmetal Alchemist
Two alchemist brothers go on a quest for the Philosopher's Stone after...

Cowboy Bebop: The Movie
The year is 2071. Following a terrorist bombing, a deadly virus is rel...

Yu Yu Hakusho: The Movie - The Golden Seal
While vacationing, Koenma is kidnapped by a pair of demons known as Ko...