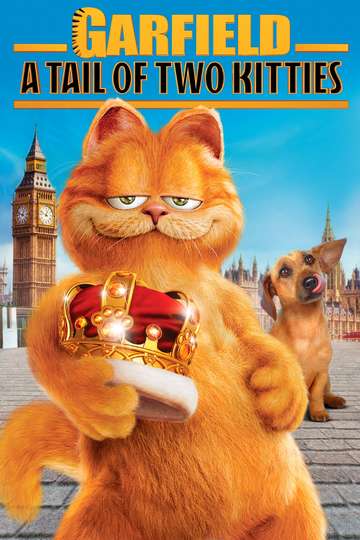 Garfield: A Tail of Two Kitties (2006)Stream and Watch Online Looking to watch 'Garfield: A Tail of Two Kitties' in the comfort of your own home? Discovering a streaming service to buy, rent, download, or view the Tim Hill-directed movie via subscription can be a huge pain, so we here at Moviefone want to do the work for you.

Below, you’ll find a number of top-tier streaming and cable services - including rental, purchase, and subscription options - along with the availability of 'Garfield: A Tail of Two Kitties' on each platform. Now, before we get into all the details of how you can watch 'Garfield: A Tail of Two Kitties' right now, here are some particulars about the 20th Century Fox, Davis Entertainment, Dune Entertainment, Major Studio Partners, Ingenious Media, 20th Century Fox Animation adventure flick.

Released June 15th, 2006, 'Garfield: A Tail of Two Kitties' stars Breckin Meyer, Jennifer Love Hewitt, Billy Connolly, Bill Murray The PG movie has a runtime of about 1 hr 22 min, and received a user score of 55 (out of 100) on TMDb, which compiled reviews from 1,647 top users.

Curious to know what the movie's about? Here's the plot: "Jon and Garfield visit the United Kingdom, where a case of mistaken cat identity finds Garfield ruling over a castle. His reign is soon jeopardized by the nefarious Lord Dargis, who has designs on the estate."

Bee Movie
Barry B. Benson, a bee who has just graduated from college, is disillu...

The Smurfs
When the evil wizard Gargamel chases the tiny blue Smurfs out of their...

Arthur and the Invisibles
Arthur is a spirited ten-year old whose parents are away looking for w...

Alvin and the Chipmunks: The Squeakquel
Pop sensations Alvin, Simon and Theodore end up in the care of Dave Se...

Garfield
Garfield, the fat, lazy, lasagna lover, has everything a cat could wan...

Surf's Up
Cody is a surfing penguin from Shiverpool who dreams of making it big...