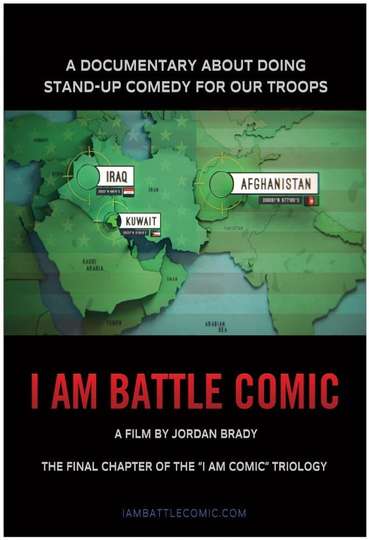 I Am Battle Comic (2017)Stream and Watch Online

Want to watch 'I Am Battle Comic' on your TV or mobile device at home? Searching for a streaming service to buy, rent, download, or view the Jordan Brady-directed movie via subscription can be a challenge, so we here at Moviefone want to do the heavy lifting.

We've listed a number of streaming and cable services - including rental, purchase, and subscription alternatives - along with the availability of 'I Am Battle Comic' on each platform. Now, before we get into all the details of how you can watch 'I Am Battle Comic' right now, here are some specifics about the Brady Oil Entertainment documentary flick.

Released March 23rd, 2017, 'I Am Battle Comic' stars George Lopez, Dave Attell, Jeff Capri, Don Barnhart Jr. The NR movie has a runtime of about , and received a user score of 90 (out of 100) on TMDb, which assembled reviews from 1 knowledgeable users.

Interested in knowing what the movie's about? Here's the plot: "A comedy documentary about performing stand-up comedy for U.S. Troops stationed in Afghanistan, Kuwait and Iraq. Heartfelt interviews with top professional comedians are woven in with filmmaker Jordan Brady's first-hand experience going to the Middle East. While traveling (Spring 2016) brutal terrorist attacks in Brussels, Turkey and Iraq remind us of the dangers in thew world, and underscore the mission to provide laughter for the men and women serving the military."

'I Am Battle Comic' is currently available to rent, purchase, or stream via subscription on Microsoft Store, FlixFling, YouTube, Google Play Movies, and Apple iTunes .