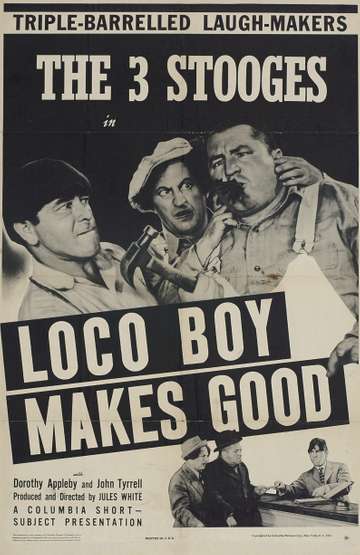 TMDb Score
60
NR 18 minJan 8th, 1942Comedy
The stooges decide to get some easy money by having Curly slip on a bar of soap in a hotel lobby so they can sue the owner. Curly slips as planned but the hotel turns out to be run by an old lady who is about to lose her lease to the evil landlord. The stooges decide to help her fix up the place and start by beating up the landlord and stealing his watch. After their usual antics in renovating the place, the hotel is ready for the grand re-opening. The stooges put on a big show with a famous critic in attendance. Their corny act goes over poorly until Curly accidentally puts on a magicians coat and becomes a sensation and the place is a success.
Show More
DirectorJules White
StarringCurly HowardLarry FineMoe Howard
Full Cast & Crew

Some More of Samoa
The stooges are tree surgeons who are enlisted by a rich old man to fi...