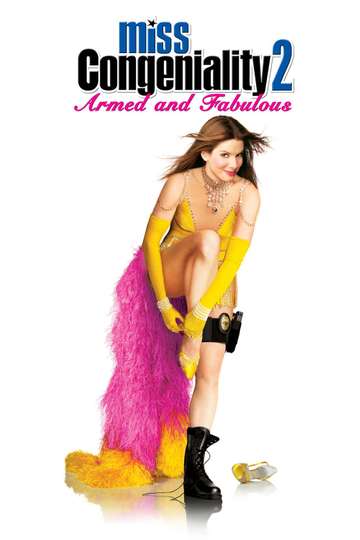 Want to watch 'Miss Congeniality 2: Armed and Fabulous' on your TV, phone, or tablet? Finding a streaming service to buy, rent, download, or watch the John Pasquin-directed movie via subscription can be difficult, so we here at Moviefone want to take the pressure off.

We've listed a number of streaming and cable services - including rental, purchase, and subscription choices - along with the availability of 'Miss Congeniality 2: Armed and Fabulous' on each platform when they are available. Now, before we get into the fundamentals of how you can watch 'Miss Congeniality 2: Armed and Fabulous' right now, here are some specifics about the Village Roadshow Pictures, Castle Rock Entertainment, Warner Bros. Pictures, Fortis Films action flick.

Released March 11th, 2005, 'Miss Congeniality 2: Armed and Fabulous' stars Sandra Bullock, Regina King, Enrique Murciano, William Shatner The PG-13 movie has a runtime of about 1 hr 55 min, and received a user score of 57 (out of 100) on TMDb, which assembled reviews from 1,548 well-known users.

Interested in knowing what the movie's about? Here's the plot: "After her triumph at the Miss United States pageant, FBI agent Gracie Hart becomes an overnight sensation -- and the new "face of the FBI". But it's time to spring into action again when the pageant's winner, Cheryl, and emcee, Stan, are abducted."

The Blind Side
"Based on the extraordinary true story"
The Two Jakes
"They say money makes the world go round. But sex was invented before money."
The Princess Diaries
"She rocks. She rules. She reigns."
Practical Magic
"For two sisters from a family of witches, falling in love is the trickiest spell of all."
Legally Blonde 2: Red, White & Blonde
"Bigger. Bolder. Blonder."

The Lake House
"How do you hold on to someone you've never met?"

Two Weeks Notice
"Over. Done. Finished. A comedy about love at last glance."
The Princess Diaries 2: Royal Engagement
"It can take a lifetime to find true love; she's got 30 days!"
Forces of Nature
"He went from the eye of the storm, into the arms of a hurricane."
Runaway Bride
"Catch her if you can."
The Tempest
The Net
"No driver's license, no credit cards, no passport, no access to her bank accounts in a foreign country ... She finds her identity stolen."

All About Steve
"A Comedy That Clings"
Maid in Manhattan
Miss Congeniality
"Never Mess With An Agent In A Dress."

My Best Friend's Wedding
"It's about finding the love of your life. And deciding what to do about it."

The Proposal
"Here comes the bribe..."

Legally Blonde
"Don't judge a book by its hair color!"
While You Were Sleeping
"A story about love at second sight."
Speed 2: Cruise Control
"As the stakes get higher, the ride gets even faster."