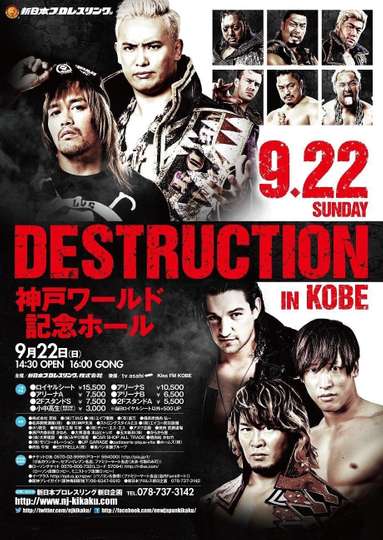 TMDb Score
90
NR Sep 22nd, 2019Action
The third NJPW Destruction event takes place today in Kobe. Tetsuya Naito will defend his IWGP Intercontinental Championship against Jay White in the main event. The two last met in a singles match on August 11, when White beat Naito to win the B Block in the 2019 G1 Climax. The semi-main will feature Shingo Takagi vs. Hirooki Goto. Takagi will be looking for a high profile win over an established heavyweight as he continues to climb towards the top of the card. The Young Lion Cup will also conclude, with Ren Narita facing Clark Connors, and Shota Umino battling Karl Fredericks in what will likely be the deciding match. Among the other matches on the show is Kazuchika Okada, Kota Ibushi & Robbie Eagles vs. SANADA, EVIL & BUSHI. Tomohiro Ishii, YOSHI-HASHI, Will Ospreay, SHO & YOH will also face KENTA, Tama Tonga, Tanga Loa, Taiji Ishimori & El Phantasmo.
Show More
StarringTetsuya NaitoJay WhiteShingo Takagi
Movie DetailsFull Cast & Crew