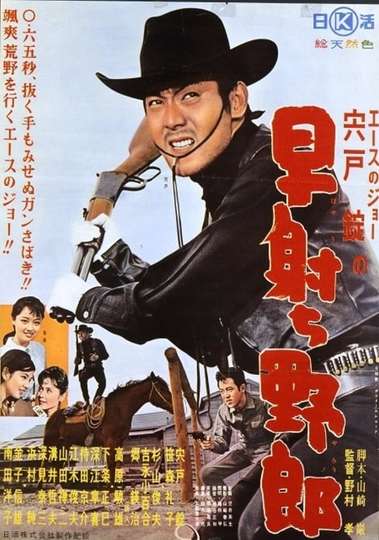 NR 1 hr 19 minWestern, Action
One day, a lone horseman rides into town with a wounded man strapped behind him. Joe, the Ace, had captured one of the bandits who had held up the armored payroll car headed for the dam construction site, takes the wounded man to the police and claims the reward offered. He is told to wait until the driver of the armored car returns to identify the bandit and goes over to the Blue Star where he is introduced to Mishima, the owner of the cabaret, who is highly respected in the town. Joe then meets Saburo, while fishing, and his lovely sister, who seem to sense the real man beneath the rough appearance and take him into their home. Word reaches Joe that the bandit he'd captured had been shot and he hurries over to the hospital.
Show More
DirectorTakashi Nomura
StarringJÅ ShishidoReiko SasamoriToshio Sugiyama
Full Cast & Crew