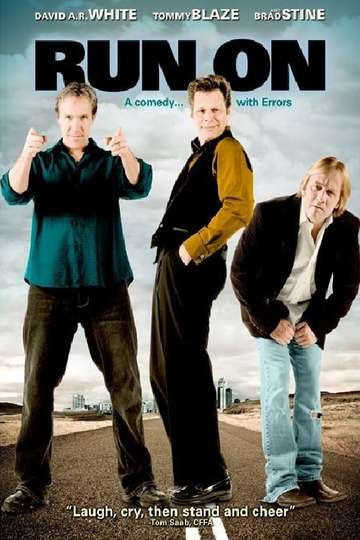 Need to watch 'Run On' on your TV or mobile device at home? Finding a streaming service to buy, rent, download, or watch the -directed movie via subscription can be a huge pain, so we here at Moviefone want to do right by you.

Below, you’ll find a number of top-tier streaming and cable services - including rental, purchase, and subscription choices - along with the availability of 'Run On' on each platform. Now, before we get into the nitty-gritty of how you can watch 'Run On' right now, here are some finer points about the flick.

Released February 24th, 2011, 'Run On' stars Brad Stine, Tommy Blaze, David A.R. White The movie has a runtime of about , and received a user score of 10 (out of 100) on TMDb, which collated reviews from 1 respected users.

Want to know what the movie's about? Here's the plot: "Run On is stand up comedy at its best. Delivered by three of the top Christian performers as they hysterically share a stage and tell of their own prodigal journeys. Though each story is from a unique experiences, they weave seamlessly together to form the oldest human story of all, the futility of trying to "run" from God. David A.R. White, Tommy Blaze and Brad Stine bring a comedic flare to the stories of their lives. While relaying humorous stories along with the real truth of their testimony, they entertain the audience with hilarious comments about parents, family, and growing up. But they also show a serious side as they testify to sinful moments in each of their lives. These men will make you laugh and teach you some important lessons for your life as they discuss the Christian influence that changed each of them."

'Run On' is currently available to rent, purchase, or stream via subscription on Pure Flix .