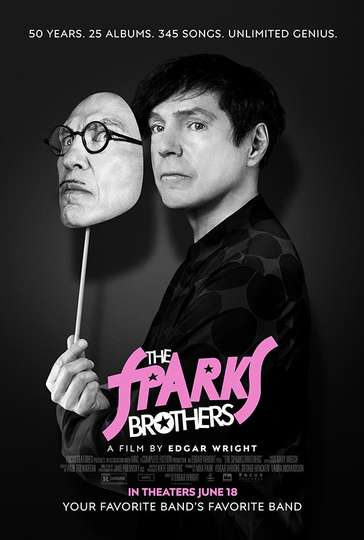 Yearning to watch 'The Sparks Brothers' on your TV, phone, or tablet? Hunting down a streaming service to buy, rent, download, or watch the Edgar Wright-directed movie via subscription can be confusing, so we here at Moviefone want to take the pressure off.

Read on for a listing of streaming and cable services - including rental, purchase, and subscription options - along with the availability of 'The Sparks Brothers' on each platform when they are available. Now, before we get into the fundamentals of how you can watch 'The Sparks Brothers' right now, here are some finer points about the Complete Fiction, MRC Non-Fiction music flick.

Released June 18th, 2021, 'The Sparks Brothers' stars Ron Mael, Russell Mael, Beck, Gary Stewart The R movie has a runtime of about 2 hr 20 min, and received a user score of 73 (out of 100) on TMDb, which assembled reviews from 39 knowledgeable users.

Interested in knowing what the movie's about? Here's the plot: "How can one rock band be successful, underrated, hugely influential, and criminally overlooked all at the same time? Edgar Wright's debut documentary THE SPARKS BROTHERS, which features commentary from celebrity fans Flea, Jane Wiedlin, Beck, Jack Antonoff, Jason Schwartzman, Neil Gaiman, and more, takes audiences on a musical odyssey through five weird and wonderful decades with brothers/bandmates Ron and Russell Mael celebrating the inspiring legacy of Sparks: your favorite band's favorite band."

Annette
"As dangerous, as intense, as love."