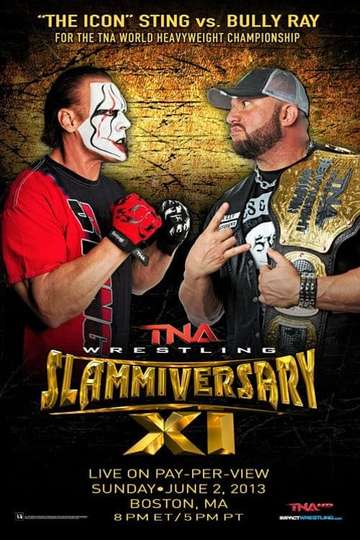 Fancy watching 'TNA Slammiversary XI' in the comfort of your own home? Searching for a streaming service to buy, rent, download, or watch the -directed movie via subscription can be confusing, so we here at Moviefone want to do right by you.

We've listed a number of streaming and cable services - including rental, purchase, and subscription alternatives - along with the availability of 'TNA Slammiversary XI' on each platform when they are available. Now, before we get into the various whats and wheres of how you can watch 'TNA Slammiversary XI' right now, here are some finer points about the Total Nonstop Action (TNA) flick.

Released June 2nd, 2013, 'TNA Slammiversary XI' stars Steve Borden, Mark LoMonaco, Allen Jones, Kurt Angle The movie has a runtime of about , and received a user score of 70 (out of 100) on TMDb, which compiled reviews from 3 top users.

Curious to know what the movie's about? Here's the plot: "Slammiversary XI was a professional wrestling pay-per-view (PPV) event produced by the Total Nonstop Action Wrestling (TNA) promotion, which took place on June 2, 2013 at the Agganis Arena in Boston, Massachusetts. It was the 11th anniversary celebration for TNA, and the 11th monthly Pay-Per-View under the Slammiversary chronology. Chris Sabin VS Kenny King (c) VS Suicide | Magnus, Samoa Joe and Jeff Hardy VS Aces & Eights (Wes Brisco, Garrett Bischoff and Mr. Anderson) | Jay Bradley VS Sam Shaw | Abyss VS Devon (c) | Gunner and James Storm VS Chavo Guerrero and Hernandez (c) VS Bad Influence (Christopher Daniels and Kazarian) VS Austin Aries and Bobby Roode | Taryn Terrell VS Gail Kim | Kurt Angle VS A.J. | Bully Ray (c) VS Sting" .

Knock at the Cabin
"Save your family or save humanity. Make the choice."