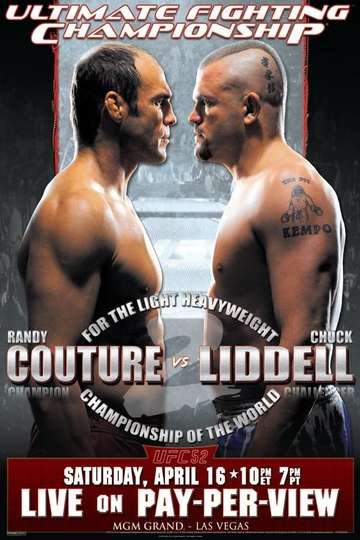 Looking to watch 'UFC 52: Couture vs. Liddell II' in the comfort of your own home? Discovering a streaming service to buy, rent, download, or view the -directed movie via subscription can be a challenge, so we here at Moviefone want to help you out.

Read on for a listing of streaming and cable services - including rental, purchase, and subscription alternatives - along with the availability of 'UFC 52: Couture vs. Liddell II' on each platform when they are available. Now, before we get into all the details of how you can watch 'UFC 52: Couture vs. Liddell II' right now, here are some finer points about the flick.

Released April 16th, 2005, 'UFC 52: Couture vs. Liddell II' stars Chuck Liddell, Randy Couture, Renato Sobral, Travis Wiuff The movie has a runtime of about , and received a user score of 68 (out of 100) on TMDb, which collated reviews from 5 respected users.

Curious to know what the movie's about? Here's the plot: "UFC 52: Couture vs. Liddell 2 was a mixed martial arts event held by the Ultimate Fighting Championship on April 16, 2005, at the MGM Grand Arena in Las Vegas, Nevada. The event was broadcast live on pay-per-view in the United States and Canada, and later released on DVD." .