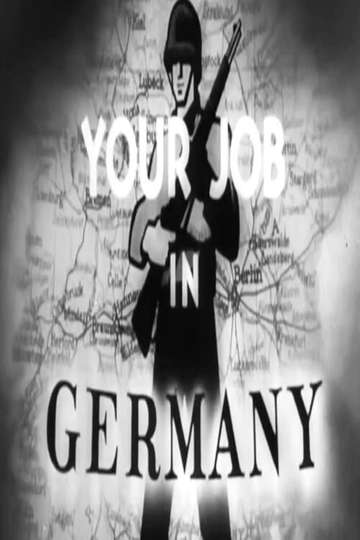 Your Job in Germany (1945)Stream and Watch Online

Yearning to watch 'Your Job in Germany' in the comfort of your own home? Tracking down a streaming service to buy, rent, download, or view the Frank Capra-directed movie via subscription can be a challenge, so we here at Moviefone want to do the heavy lifting.

Read on for a listing of streaming and cable services - including rental, purchase, and subscription options - along with the availability of 'Your Job in Germany' on each platform. Now, before we get into the fundamentals of how you can watch 'Your Job in Germany' right now, here are some details about the U.S. Army Pictorial Services documentary flick.

Released April 15th, 1945, 'Your Job in Germany' stars Dana Andrews The movie has a runtime of about 11 min, and received a user score of 56 (out of 100) on TMDb, which collated reviews from 7 knowledgeable users.

You probably already know what the movie's about, but just in case... Here's the plot: "Your Job In Germany is a short film made for the United States War Department in 1945 just before Victory in Europe Day (VE). It was shown to US soldiers about to go on occupation duty in Germany. The film was made by the military film unit commanded by Frank Capra and was written by Theodor Geisel, better known by his pen name Dr. Seuss."

'Your Job in Germany' is currently available to rent, purchase, or stream via subscription on GuideDoc .