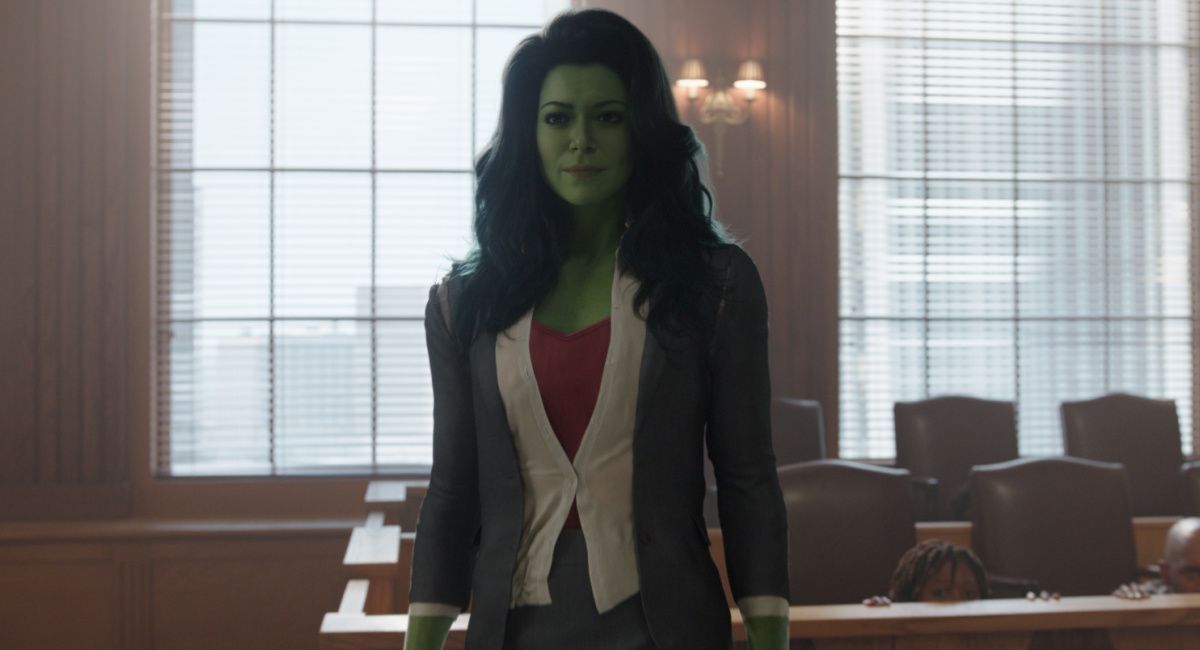 Welcome to the first recap of ‘She-Hulk: Attorney at Law!'

We open on Jennifer Walters (Tatiana Maslany) practicing closing arguments on her legal partners, Nikki (Ginger Gonzaga) and Dennis (Drew Matthews). Through context, we can tell the case is for someone with superhuman powers. One mentions that if it doesn’t go their way, she can ‘hulk-out’ to change the tide of the case. Her friends joke about it and Jennifer closes the door… and begins to talk to directly to the audience.

Jennifer confesses that yes, she is a Hulk and that we (the audience) probably won’t be able to focus on anything else after getting that knowledge bomb. So, we’re getting a nice flashback! Cut to her and her cousin Bruce Banner (Mark Ruffalo) on a road trip. Banner explains that he now has a piece of tech that he wears that allows him to stay in human form and not Hulk-out.

She goes off about a History channel documentary, claiming that Steve Rogers (Chris Evans) never had a girlfriend before he went under ice. Before Bruce could explain how wrong she is about his friend and colleague, they're run-off the road by a spaceship and crash. Jennifer makes it out first and attempts to get Bruce out. The inhibitor is broken and instead of Bruce changing right away, she does, having his radiated blood gone into an open wound on her.

The camera follows her running through the woods, Hulked-out, before waking up and trying to gather her bearings. Jennifer spots a bar and runs for cover, completely confused. She’s wiping down blood in the bathroom and is stopped by a group of (honestly very kind) women and sent out in new clothes. The whole time, we see her dazed and confused.

While waiting for Bruce, she is stopped by a group of men and catcalled. This stresses her out, obviously, and she goes Hulk and tackles them. She wakes up again, but this time in a house, with new clothes. Jen steps out, and we’re shown she’s on the beach in what looks like a resort, and inspects a broken helmet belonging to an Iron Legion bot.

Jennifer then hears and follows music and finds Bruce as ‘smart’ Hulk. He tells her she’s in Mexico, and that he went there during the Blip to regain control. Bruce explains that he and Stark built the house, and that he could come and take it back whenever he wanted. Banner explains the spaceship was a Sakaaran class ship, most likely delivering a message which is probably going to be important later, and claims the fact it even showed up just comes with being a Hulk.

Finally getting to Jennifer’s many questions about her new abilities, Banner freaks her out by saying the dose of radiation from him was lethal but explains the two of them have the right DNA to absorb gamma radiation and not die. Her blood is way stronger than his and was even used to heal his arm. Basically, Jennifer is better than Bruce!

Jen asks to be turned back to normal, and Bruce explains he cannot fix her. She doesn’t want that answer, and he tells her there’s no going back to who she was. She starts to panic, and Bruce kindly helps her out with breakfast. He tells her to avoid people, and that she can’t go back to her job. Cue giant syllabus on how to be a Hulk.

Now comes the training. Bruce is seemingly having fun in testing her and gets her to turn into her Hulk form by locking her in a room with buzzsaws. But instead of her going monstrous like Bruce, she’s just Jennifer as a Hulk. “I think I’m jealous, is that what I’m feeling?” Bruce asks.

But, even with this, she still can’t control the transformation. He tells her it’s not the Hulk that will destroy everything, it’s the anger. So … why not try yoga to learn control of both? As we see, yoga doesn’t exactly work.

We then see Jen sleeping, and Bruce wakes her up. Time for a fun montage, including spandex and boulder tossing, and Bruce trying to one up her in every way. Obviously, he is mad that someone is better at the Hulk game than he is. He teaches Jen it isn’t all bad being a Hulk, most importantly, their alcohol tolerance! “To a good time during a hard time.” Bruce says.

The next morning Jennifer wakes with a hangover and questions when she can leave. She tells Bruce she isn’t going to be a superhero and wants to go back to being a lawyer. The Hulk life wasn’t built for her. Bruce comments on how good she is at holding in her anger, and she says it's because of misogynistic reasons and her paralegal job. Men catcalling her, and male paralegals not believing in her skill.

In between that explanation, she turns into the Hulk, and quickly back to her normal human form after, showing her control. But Bruce isn’t done, and still fights with her about being a super-hero. Jennifer fights back against him, claiming Bruce is trauma dumping on her, and that denying half of what she is now is not smart. He tries to stop her, but they get into another argument, and they fight.

Once again, Jen one-ups him and continually makes him angry. They destroy the bar, and while she apologizes, Bruce makes her fix it. We get another great fourth wall break, and things seem better, with Bruce even accepting her wanting to go back to her normal life. They hug it out and apologizes happen, with flashback ending.

We’re back to modern day and Jennifer going to her case. She gets up to do her closing argument in court, only for a supervillain to break through the court room. Her friend tells her to ‘do her thing’ and hulk-out, and she absolutely kicks the heck out of the villain, Titania (played by Jameela Jamil) and then the episode ends.

Marvel studios really knocked it out of the park with the brand new ‘She-Hulk’ series. The one thing the MCU shows have done right has been genre flipping, and this recent series really kills it in the comedy department with the fourth wall breaks. There are not too many to make it annoying, they are more fun and lighthearted than anything, especially with how it handles the title of Hulk and the emotions that comes with it.

Tatiana Maslany plays a fun foil to Mark Ruffalo’s Banner, and really tells him what needs to be said about the trauma dumping and the whole "why should we share the same experience" idea? Through Maslany and Ruffalo’s stellar chemistry, you can tell, even with little storytelling, the familial bond between the two is strong.

I cannot wait to see where the series goes, and don’t worry, I’ll have a whole lot more to say about Charlie Cox returning. See you next week! Also don’t forget to stay after this episode’s credits for a hilarious surprise!