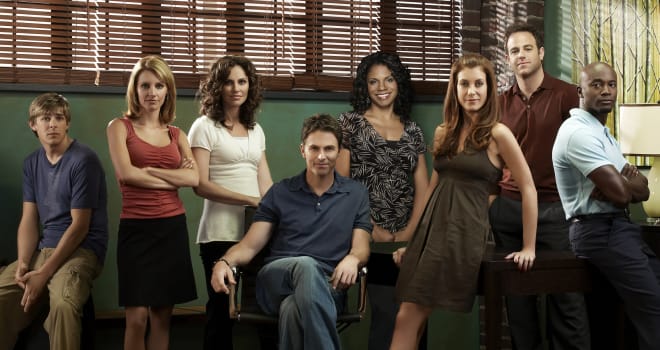 With "Grey's Anatomy," Shonda Rhimes became the first African-American woman to both create and executive produce a top-10 network TV series. Don't worry, though. Shonda's awesomeness might be one in a million, but because this overachiever is also a prolific writer, she's happy to share some of it with you.

Like a lot of the best entertainment, "Grey's Anatomy" came from a very real place. After a bit of success as a screenwriter for movies like "Crossroads," post-9/11 reflections, ponderings on motherhood, and a fascination with watching surgeries on TV led Shonda Rhimes to write her first pilot. And so the world was gifted the distinct medical drama cocktail that is "Grey's," a one-of-kind mix of ethnically and socially diverse casting, sharp writing, eye candy, and characteristically shocking season finales.

You know what to expect when a spinoff hits: Whether it focuses on a breakout character or a different side of the show's story, the mantra is usually "the same, but different."

Shonda Rhimes didn't settle for that when she created and contributed scripts to the "Grey's Anatomy" spinoff, "Private Practice." Sure, Kate Walsh's Dr. Addison Forbes bridges the "Grey's" gap as she moves from a hospital full of gorgeous people in Seattle to a hospital full of gorgeous people in L.A., but the straight-faced melodrama of "Practice" is worlds apart from the smirking banter of the Grey-Sloan Memorial Hospital.

Critics and fans had a mixed response to "Private Practice," which dug deep into topics like social engineering and shades-of-gray morality. But one thing's for sure -- when Shonda took a swing at the spinoff, she swung hard.

No cute titles, here -- "Scandal" wears its twisting, turning, bitingly political heart on its sleeve. Not only did creator and sometimes writer Rhimes find her perfect muse in powerful star Kerry Washington, the politicizing is explosively mixed with presidential love affairs, espionage, and insanely magnetic cast chemistry. It's the kind of show that inspires everything from social media tsunamis to its own fashion line -- that's precisely how "Scandal" jells with the pulse of the nation.

So Shonda is three series deep as a writer, but she's apparently not into vacations. While her shows rack up Emmys, she racks up GLAAD Media and NAACP Image awards, which she probably puts on her desk right alongside scripts for the stacks of shows she produces, like "How to Get Away with Murder," "The Catch," and "Still Star-Crossed."

Sounds like she's following Dr. Cristina Yang's advice from Season 4 of "Grey's": "Have some fire. Be unstoppable. Be a force of nature." For Shonda Rhimes, that's check, check, and check.