The British actor talks about working in a foreign language and how to be robotic on screen.

In the German film ‘I’m Your Man,’ Dan Stevens plays Tom, an android that will teach itself to be the perfect romantic partner for a historian named Alma (played by Maren Eggert). Dan Stevens recently spoke to Moviefone about his work on the movie.

Moviefone: How would you describe Tom?

Dan Stevens: Well, Tom is an Android boyfriend that's been created as part of this program that our lead, Alma, has been asked to study. And so, she's road-testing this boyfriend experience. And so, he speaks very complex and technical German, with an English accent, has hair a bit like Cary Grant, and looks a bit like that guy from 'Downton Abbey'.

MF: I read that the script was in German. What's that like for you as a performer, kind of analyzing a character that you're going to play, but in a different language?

Stevens: A lot of it is very, very similar to how I would normally work. I was certainly working the ear a little harder on set, just working with everybody in a foreign language, both in front and behind the camera. But it was a great way to kind of immerse myself in it. And also for Tom, I think, a character who's learning and listening and trying to improve and calibrate himself, that was kind of what I was trying to do the whole summer as well, is just, make sure that I had completely understood the assignment and try to be better.

MF:There's a lot of very dry humor, especially in the silences and just kind of the reactions. Were you feeling that on set? And is it tough to stay focused and stay “Stoic Tom” during those scenes?

Stevens: I mean, it's something I really enjoy, is a sort of physical comedy as much as the verbal stuff. And there's a lot of verbal gags in here, which I think worked just as well with subtitles as in German. But yeah, the physical comedy potential of the role was very apparent from the word go, really. And it was something that we really enjoyed playing with, and just deploying learned mannerisms and things like that. What would a classic romantic lead do in this particular situation? It's like, "Okay, well, let's kind of lean on that." Let's almost overplay that or isolate that one move rather than it be this sort of naturalistic flow of movements. Have him just do two of those moves and see what that looks like. And it looks odd. And yet it's part of the vocabulary that we recognize from a romantic comedy, but sort of warped somehow. And that ends up being quite fun.

MF: I'm glad you brought that up, because there's a scene where Alma throws wine in Tom's face, the audience doesn’t even get a sense of like, "Oh, I'm trying to stay still in this." As an actor, how are you picking how Tom's going to react in that scene?

Stevens: I'm glad that came across, because I'm pretty sure there's a number of takes where we had to go, "No, no, no reset. You went like this before it came." And I was like, "Oh, okay." And you just try ... Again, just trying to erase the conventional human response very often was hard sometimes. And even as an actor, just in listening, or in how your thought process might go, just trying to keep that on track. But I think things like throwing wine in the face, it's physically quite hard to suppress.

MF: One are the things I think helps make this movie really work is that there's not much that keeps reminding you, outside of dialogue, that Tom's a robot. I mean, maybe there's that stretching scene where he's in the closet earlier. And I was curious, how do you bend back over like that on your feet? Is that some yoga pose?

Stevens: Yeah. Again, we wanted to try and show something that was kind of superhuman that was very odd. So yeah, there was a sort of a clever series of rigs that enabled us to get that shot. But yeah, I mean, it was really… Again, it was part of the sort of physical appeal and challenge of the role really, was kind of finding those moments, where you would be reminded. And perhaps that might come quite late, but to see that evolution and to see the movements get a little more fluid and more appropriate perhaps. And yeah, it was great, just charting that with Maria as the role developed,

MF: I read that you shot this during the pandemic. I would never have imagined that.

Stevens: That's great. Yeah, no, we were very lucky. We were one of the first films that Berlin allowed to happen during COVID times. It was sort of July, August of last year, under very strict protocols. We have a couple of crowd scenes, which we shot towards the end of the schedule. But most of it, we were lucky enough to shoot in a studio environment. So a lot of that apartment stuff where the core relationship takes place, we could shoot that in very controlled conditions. And that made things a little easier. But yeah, it was still a huge challenge. And it was a first for most people, I think, making a movie under those conditions.

MF: I can't imagine there's a large list of British actors that somebody like your director Maria can go to looking for Who else could speak German?

Stevens: I guess I don't think there are many of us, and I'm the other guys were busy. So it was a huge honor to be asked. And yeah, I wonder. And I don't know if they were just looking at an English actor ... I think they were just looking at non-German actors who could speak German, who could get their heads around the complexity of the language, but also have this slightly foreign quality. And I'm sure they could have adapted the script to be any nationality really, but it was kind of funny that it ended up being British.

MF: You have such great chemistry with Maren Eggert. There looks like there's a joy there; some of the best movies have an infectious joy on behalf of the filmmakers. Was that kind of the tone on set? 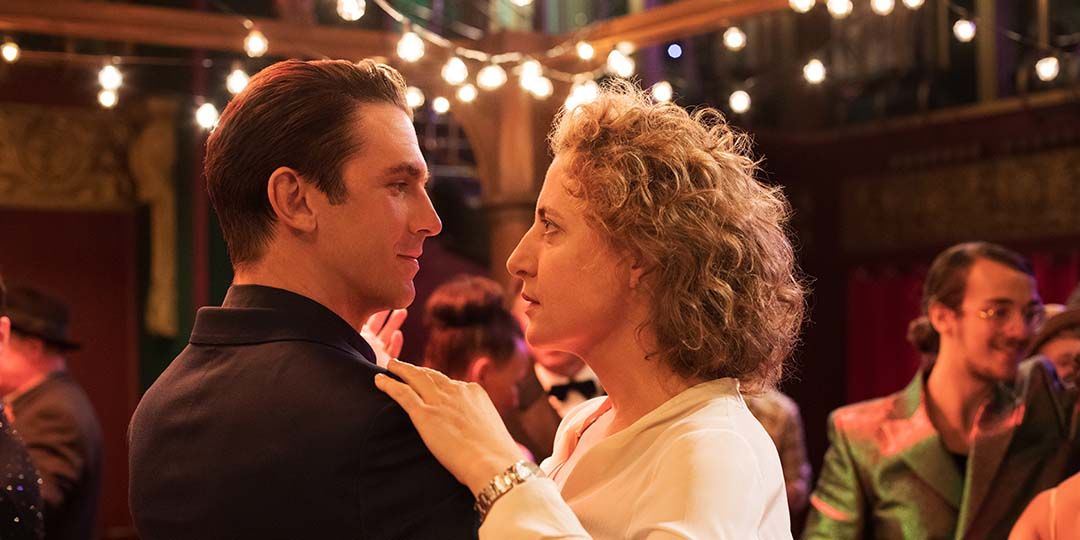 Stevens: Yes and no. I mean, absolutely, there's a huge fondness there. And I think Maren is a terrific actress. I think the chemistry, I'm so glad that it does come across, because it was interesting charting the performance. Because so many of the usual back and forth, so much of that usual playfulness between actors, there was kind of an inbuilt impediment to that, which took a bit of getting used to. And I think particularly for Maren, it was very hard, because she's giving an incredible, beautifully naturalistic human performance. And then she's standing opposite this kind of a plank of wood over there, that slowly emerges into something a little more responsive.

But initially, it was difficult for both of us, because the usual responses weren't there. But I think we found our groove. And we did have a huge amount of fun playing this. And I was so proud of Maren for winning the Silver Bear at Berlin for that performance, because it was made doubly hard by this idiot. So, yeah.

MF: Last question; would you want your own robot partner?

Stevens: I mean, sure. I think we could all use a hand. I think my wife would be delighted. Yeah. Why not?