Jon Baker and Frank "Ponch" Poncherello (Dax Shepard, Michael Pena) have just joined the California Highway Patrol (CHP) in Los Angeles but for very different reasons. Baker is a beaten up pro motorbiker trying to put his life and marriage back together. Poncherello is a cocky undercover Federal agent investigating a multi-million dollar heist that may be an inside job -- inside the CHP. The inexperienced rookie and hardened pro are teamed together, but clash more than click, so kickstarting a partnership is easier said than done. But with Baker's bike skills combined with Ponch's street savvy it might just work ... if they don't drive each other crazy along the way. 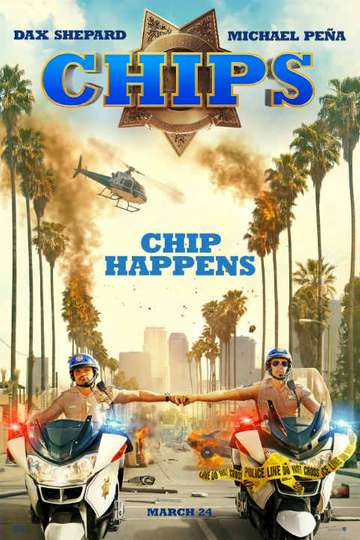 Once Upon a Time in Venice
"Never mess with a man's dog"
Goon: Last of the Enforcers
"Glatt's Back!"

Live by Night
"Witness the price of the American Dream."

Snatched
"Mess with me, mess with my mother."

Sleepless
"Don't judge a cop by his cover."

Free Fire
"All guns. No control."

Fist Fight
"After school. Parking lot. It's on."

Ghost in the Shell
"There's nothing sadder than a puppet without a ghost."

John Wick: Chapter 2
"Never stab the devil in the back."

King Arthur: Legend of the Sword
"From nothing comes a King"

The Fate of the Furious
"Family no more."

Going in Style
"You're never too old to get even."

Why Him?
"Of all the guys his daughter could have chosen..."

Power Rangers
"Together we are more."

Life
"Be careful what you search for"

The Mummy
"Welcome To A New World of Gods And Monsters"