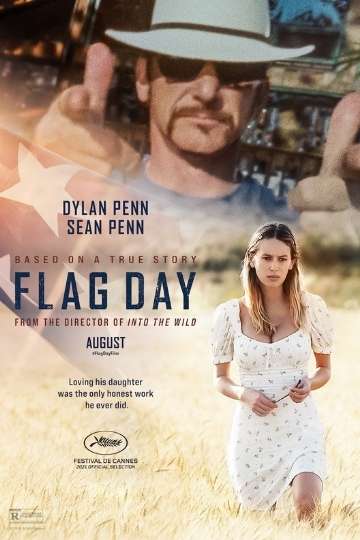 Fancy watching 'Flag Day' on your TV or mobile device at home? Tracking down a streaming service to buy, rent, download, or view the Sean Penn-directed movie via subscription can be confusing, so we here at Moviefone want to take the pressure off.

We've listed a number of streaming and cable services - including rental, purchase, and subscription alternatives - along with the availability of 'Flag Day' on each platform when they are available. Now, before we get into the various whats and wheres of how you can watch 'Flag Day' right now, here are some details about the Metro-Goldwyn-Mayer, Ingenious Media, Clyde Is Hungry Films, RocketScience, Wonderful Films, Rahway Road Productions, Conqueror Productions, New Element Films, Olive Hill Media thriller flick.

Interested in knowing what the movie's about? Here's the plot: "Jennifer Vogel'™s father John was larger than life. As a child, Jennifer marveled at his magnetizing energy and ability to make life feel like a grand adventure. He taught her so much about love and joy, but he also happened to be the most notorious counterfeiter in US history. Based on a true story and directed by Sean Penn, Flag Day stars Penn and his real-life daughter Dylan Penn in an intimate family portrait about a young woman who struggles to rise above the wreckage of her past while reconciling the inescapable bond between a daughter and her father."

Nature of the Beast
"All men are created evil."
The Blue Iguana
"She was a real looker, but I knew if she got the chance, She'd put a bullet in my back. Dames are funny that way."
Anonymously Yours

The Diary of a Teenage Girl
"Some things are best kept secret"
In the Line of Duty: Manhunt in the Dakotas
The Christmas Promise
"Love lives in the words we keep."
Il mammone
Snowmance
"She’s building her perfect man, one snowflake at a time."
Scented with Love
Summit Fever

The Extraordinary Adventures of Adèle Blanc-Sec
High Desert Kill
"In the badlands of New Mexico it waits for them..."

Bones and All
Wedding Bells
In the Line of Duty: Street War
Letters from a Killer

Firestarter
Reds
"Not since Gone With The Wind has there been a great romantic epic like it!"
Bad Day on the Block
"Everyone has a breaking point"
L'été en pente douce
Rubikon