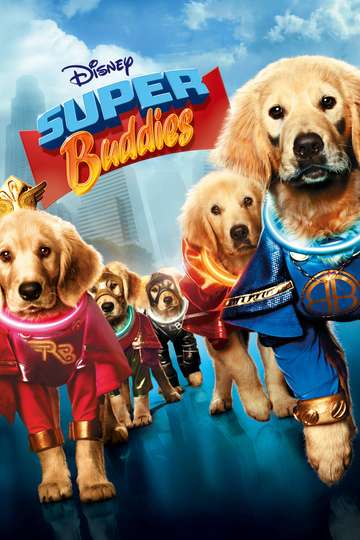 Looking to feast your eyes on 'Super Buddies' on your TV or mobile device at home? Tracking down a streaming service to buy, rent, download, or watch the Robert Vince-directed movie via subscription can be confusing, so we here at Moviefone want to do right by you.

Read on for a listing of streaming and cable services - including rental, purchase, and subscription choices - along with the availability of 'Super Buddies' on each platform. Now, before we get into the various whats and wheres of how you can watch 'Super Buddies' right now, here are some specifics about the Key Pix Productions family flick.

Released August 27th, 2013, 'Super Buddies' stars Michael Teigen, Tim Conway, Kimberley Sustad, Maulik Pancholy The G movie has a runtime of about 1 hr 21 min, and received a user score of 61 (out of 100) on TMDb, which assembled reviews from 98 experienced users.

You probably already know what the movie's about, but just in case... Here's the plot: "When the five puppies stumble upon the Five Power Rings of Inspiron (alien artifacts abandoned on Earth 16 years ago), they all develop super powers, and are enlisted in Captain Canine's battle against the evil Darkon alien Commander Drex. Captain Canine is commander of space ship Megasis and is from the planet Inspiron. He is the mortal enemy of the Commander Drex. In charge of protecting Princess Jorala and the Five Power Rings from Drex, Megasis places the rings in hiding on the planet Earth, and takes the form of a German Shepherd, intending to stay on earth in very deep cover. Adopted by aspiring young comic book artist Ian Shaeffer, and renamed Captain Canine, he spends 16 happy years on Earth, as Ian recounts the stories of his space adventures. But when the five Buddies discover the Power Rings and instantly develop superpowers, Captain Canine has to train them very quickly indeed - for Commander Drex is headed back to earth, and this time he's determined to succeed."

My Little Pony: Equestria Girls
Via a magic mirror, Twilight Sparkle travels into an alternate univers...

Kung Fu Panda Holiday
The Winter Feast is Po's favorite holiday. Every year he and his fathe...

Air Bud: Spikes Back
In Disney's fifth installment to the franchise, Air Bud finds that he...

Stuart Little 3: Call of the Wild
With school out for the summer, The Littles are vacationing in a cabi...

Spooky Buddies
Disney's irresistible talking puppies are back in an all-new movie tha...

Air Bud: Seventh Inning Fetch
Josh is off to his first year of college and buddy has stayed behind w...