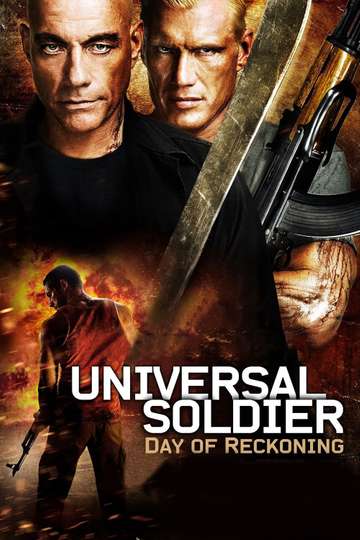 Want to watch 'Universal Soldier: Day of Reckoning' on your TV, phone, or tablet? Discovering a streaming service to buy, rent, download, or watch the John Hyams-directed movie via subscription can be confusing, so we here at Moviefone want to do the heavy lifting.

Below, you'll find a number of top-tier streaming and cable services - including rental, purchase, and subscription options - along with the availability of 'Universal Soldier: Day of Reckoning' on each platform when they are available. Now, before we get into all the details of how you can watch 'Universal Soldier: Day of Reckoning' right now, here are some details about the Signature Pictures, Foresight Unlimited, Baumgarten Management and Productions (BMP) thriller flick.

Released November 30th, 2012, 'Universal Soldier: Day of Reckoning' stars Jean-Claude Van Damme, Scott Adkins, Dolph Lundgren, Andrei Arlovski The R movie has a runtime of about 1 hr 54 min, and received a user score of 55 (out of 100) on TMDb, which collated reviews from 336 knowledgeable users.

Want to know what the movie's about? Here's the plot: "After his wife and daughter are murdered in a home invasion, a widower named John now finds himself up against an army of Universal Soldiers in relentless pursuit, led by a mysterious leader who promises to set UniSols free from their conditioning."

Teenage Mutant Ninja Turtles: Out of the Shadows
Home Alone 2: Lost in New York
"He's up past his bedtime in the city that never sleeps."
Up

The Terminator
"Your future is in its hands."
Universal Soldier: Regeneration
"Reanimated. Rearmed. The ultimate rematch"
First Blood
"This time he's fighting for his life."
Predator 2
"Silent. Invisible. Invincible. He’s in town with a few days to kill."

Transformers: Dark of the Moon
"The invasion we always feared. An enemy we never expected."
Predator
"Soon the hunt will begin."

Transformers: Revenge of the Fallen
"Revenge is coming."