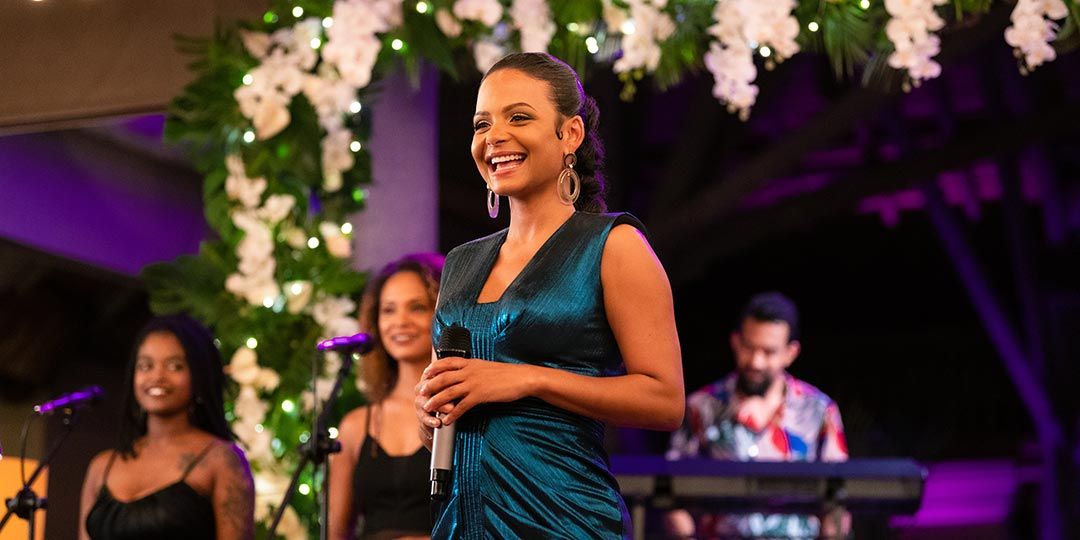 Christina Milian in 'Resort to Love'

The new Netflixromantic comedy 'Resort to Love' features Christina Milian as a struggling pop star that books a gig as a wedding singer at a tropical resort. But things get complicated with she finds the wedding is for her ex fiancé, Jason (Jay Pharoah), leading Jay’s brother Caleb (Sinqua Walls) to desperately try and keep the peace. All three of these stars recently sat down with us to talk about the new movie.

First up, Christina Milian talks about Erica, a singer like Milian herself.

Moviefone: I would imagine when you read this script, there was something in your character, Erica, that you could relate to.

Christina Milian: Absolutely. When I read ‘Resort to Love,’ there were a lot of the things that I related to. First up, they felt like real people in a circumstance that was just so odd and awkward that in real life stuff like this really does happen. The fact that she's a singer just trying to fulfill this dream, because that's the love of her life is music, and she's willing to sacrifice a lot of other things for it, I've been there before, and I've been in her shoes. So, when I was reading Erica's character, I did reflect on a couple of different things that did happen in my life, or what it felt like to be in her shoes. So yes, I fell in love with it for many reasons, but also because I could relate to it.

MF: So, I would imagine as far as any preparation, there probably wasn't much?

Milian: Technically, yeah, I guess so. I went into the studio, the songs that I sing in the movie, I got a chance to work with Harvey Mason Jr., great producer, and just worked on the songs, the six songs that I sing in the movie, and then next thing you know, I'm shipped out to Mauritius, and I'm just going for it. So I guess life gave me preparation, and being on the stage. It wasn't a set... Our director is not a music video director, nobody like that. So really, I just had to bring my take on how I would do music and how Erica would do music onstage on my own. So, yeah, I guess life kind of prepared me for it already.

Milian: There were moments like that, yes, for sure. I think when I do the song, which one? I Will Survive, I was like, "Am I bringing too much of myself, or am I being Erica?" And I was like, "No, this is Erica. Erica is finding herself. And this is her moment. This is her breakthrough moment." Of course, I Will Survive is the classic. I Will Survive, on stage, singing. She's been through all this hard time, and she's finally like, "Okay, I've overcome this, and now I'm happy in life." And I feel like when I go on stage, there's a lot of me that's like, I'm living in my best when I'm on stage. So I did question a little bit of that. Like, okay, am I differentiating the two? But then you know the difference, and it's the same mood anyways.

MF: So, just briefly, the synopsis of the movie, Erica is having a hard time, and she all of a sudden... Who would have thought this would happen halfway around the world?

Milian: Oh yeah. Erica's dreams are shattered. She's passionate and she loves music. She loves music so much that she overshadowed and even just overlooked a big breakup to her fiancé and lost somebody over her music, thinking that it was going to happen. And then she ends up losing her music and her music no longer works out for her. So she's just lost in life. And so, she goes on, and she has hope, and she takes a chance and goes to Mauritius and ends up bumping into the same ex that she left for music. And what are the odds of this happening? So I think it's kind of fun because in life we do confront these situations that are really odd and awkward, and we're in another world, and we're like, "Why did this happen?" But somehow we need these answers, and God gives them to us. So yeah, that's what happens with Erica. She has to sing at her ex fiancé's new wedding. What fun is that?

MF: Everything happens for a reason, right?

Milian: Yes, it does.

Next, Jay Pharoah and Sinqua Walls talk about their characters.

Moviefone: Jay, what has happened between Jason and Erica?

Jay Pharoah: It's a situation. There was a situation where there was no closure. So what's happened between them is they've broken up. Well, Jason has called off the wedding, and he left Erica to her own devices in New York, thinking that that was the best thing for her and thinking that that's what she wanted to do. Not talking and communicating. And then them being on this island and clashing and them having to confront each other. That's what happens. And ultimately them realizing a few things and I don't want to give too much away.

MF: Sinqua, Caleb is there kind of as a buffer. He's trying to do his best for his brother and for Erica. So was there some preparation for you for this role?

Sinqua Walls: Yeah, as a person who's consistently infused themself into other people's relationships all the time, it was just something I've already been prepared. I'm really just kidding. I didn't have any preparation specifically for this circumstance, other than just trying to be the best person I could be for the people in my life when I talked to them. So if you see in the movie, when Caleb was trying to give Erica advice and also give Jason advice, it's all authentic. It's all him really trying to say, "What is the best for this person?", because he believes in people being happy and being better. And then he finds himself in the middle of the triangle unintentionally, but his intentions are to make sure that everybody comes out okay.

MF: We can't not talk about Mauritius. What was it like filming there?

Pharoah: It was blissful. It was blissful and resplendent, and it was a different world at the time. We shot that during quarantine. So it was literally like going back in the past to 2019 where everything was okay, you know what I mean? It was not only to add that the folks there at all of the resorts. How nice they were, how accommodating they were, and how we all felt like family at the end of it. And there wasn't a disingenuous moment when you said to those folks "I'm going to miss you", because it was real. And to this day, I think I could speak for Sinqua too to say, still miss the folks out there. Miss the crew and really love to get a chance to talk and get together and promote and this because I get to see people. So it was a fun time. That's a beautiful island. It was just beautiful.

'Resort to Love' is now on Netflix.