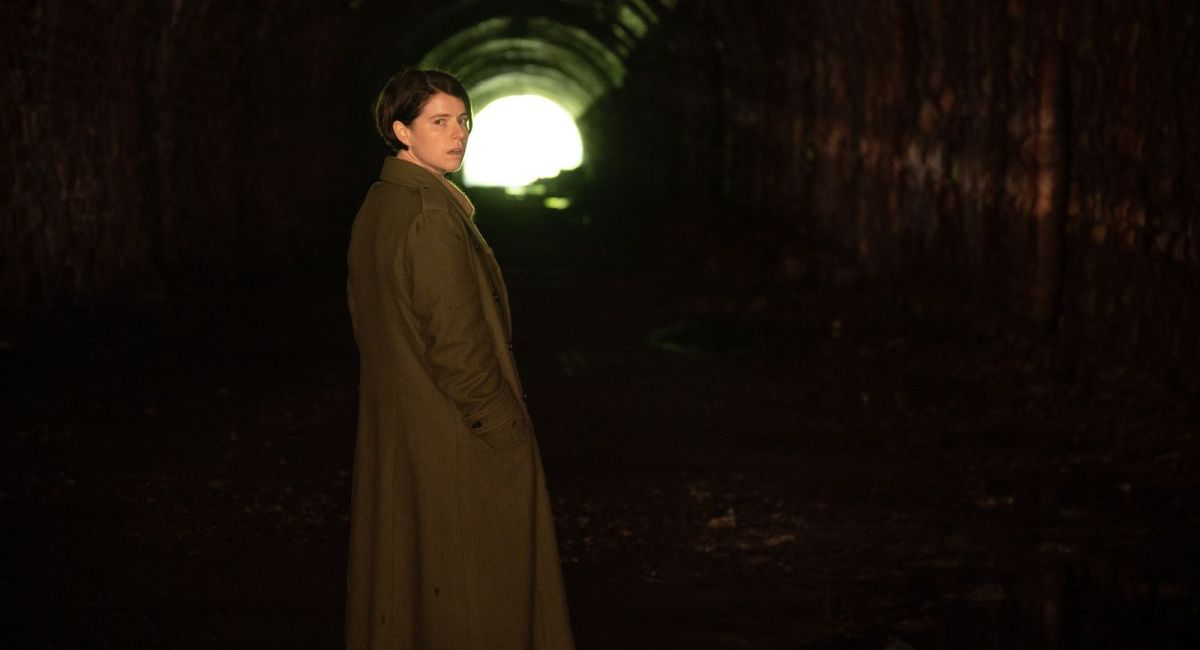 Don’t you hate it when you take yourself off to a seemingly quiet, picturesque place to stay in the countryside to recover from a personal tragedy, only to walk straight into yet more horror? Us too.

But that’s exactly what poor Jesse Buckley (or her character Harper, at least) must deal with in the trippy, freaky new trailer for Alex Garland’s new thriller ‘Men’.

The story sees Buckley’s Harper still in shock following the apparent – emphasis on that last bit, since the new promo makes it clear there could well be more to it – of her husband, played by ‘I May Destroy You’ and ‘Gangs of London’ actor Paapa Essiedu, who flung himself from the balcony of their London apartment.

Trying to recuperate from that tragedy as she processes her grief, Harper retreats alone to the beautiful English countryside, hoping to have found a place to heal.

But someone or something from the surrounding woods appears to be stalking her. What begins as simmering dread becomes a fully formed nightmare, inhabited by her darkest memories and fears.

The biggest issue she must confront, aside from that scary stalker, is seemingly multiple versions of the same man, albeit appearing in different forms. They’re all played by recent Bond movies veteran Rory Kinnear. He pops up as the man who rents a house to Harper, the local priest (who tries to convince her she was responsible for her husband’s death), a grumpy local barman and, most disturbingly, a boy who wears an unsettling mask, but honestly looks worse when he takes that off.

Garland, who also wrote the script, looks to be exploring ideas of perception, guilt, grief, and unease here, pushing the atmosphere to the forefront (at least in this trailer).

After some time spent bringing TV drama ‘Devs’ to life, it’s exciting to see Garland back working on the big screen, and hopefully digging into smart, compulsive thriller territory once more following the likes of ‘Annihilation’ and ‘Ex Machina’. As with the former, ‘Men’ appears to promise no easy answers, but bags of tone and a typically great cast.

Buckley has been putting in excellent turns for years, in movies such as ‘The Lost Daughter’ (for which she’s nominated in the Best Supporting Actress category), ‘Judy’ and ‘Wild Rose’.

Kinnear, meanwhile, is a reliable character sort who has been seen on screens big and small beyond his Bond work: he’s a pompous ship’s Admiral in HBO Max’s pirate comedy ‘Our Flag Means Death’ right now and was in the channel’s superb UK drama ‘Years and Years’.

The new trailer is stylish and shocking, building on the feeling of the teaser, and it’s certainly one we’re looking forward to in what should be another good year for thoughtful horror. We can look forward to Jordan Peele’s return with ‘Nope’ and the more viscerally vengeful likes of Robert Eggers’ ‘The Northman’ this year too.

‘Men’ will be creeping into theaters from May 20th.