M. Night Shyamalan and Alex Wolff discuss how their new movie examines the effects of aging, both physically and mentally.

In the new movie ‘Old,’ Alex Wolff (‘Pig,’ ‘Hereditary’) plays a boy that suddenly turns into a teenager, and his family is aging just as rapidly. This mind-bending movie is written and directed by M. Night Shyamalan, (‘The Sixth Sense,’ ‘Unbreakable’) and they spent some time talking to us about their new movie. 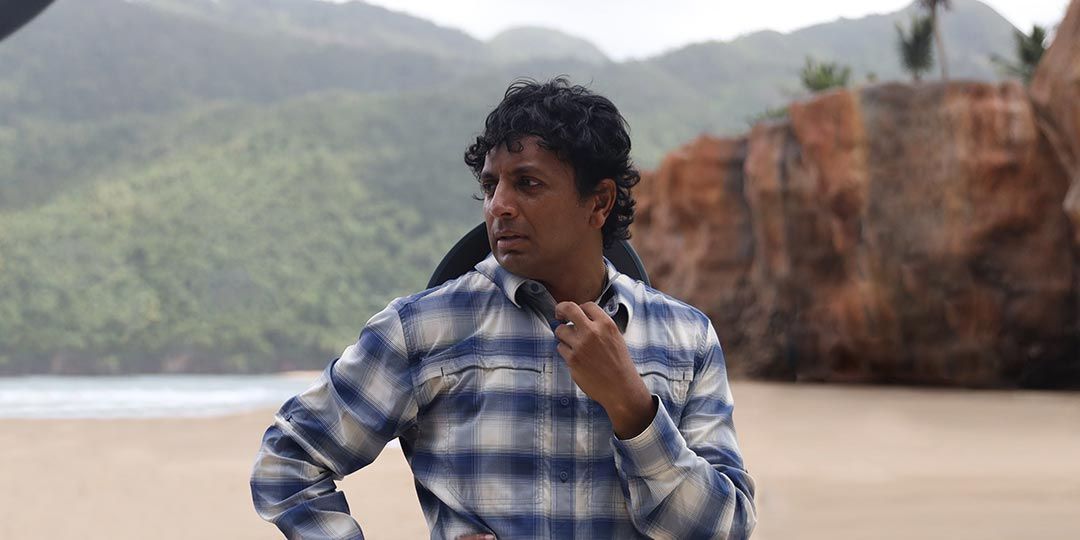 Writer/director M. Night Shyamalan on the set of 'Old'

First up, M. Night Shyamalan talks about the writing process and using the camera to show the passage of time.

Moviefone: What was your process for writing the screenplay?

M. Night Shyamalan: The screenplay, I needed it to be kind of this slow revving up and then this kind of tumbling, so it would happen so fast that the characters were having a tough time internalizing everything that was happening, and you'd feel breathless. To get that cadence right was the tricky part, and a lot of characters, and getting this darker comedic tone that's underlying everything. So it was a tricky process to get that movement.

MF: What were the end themes, your goal for the themes for the script?

Shyamalan: It's about our relationship to time. We all have a screwed up relationship to time. And the pandemic kind of underlined that when we had to stop, and we were all so bad at that, at stopping and looking around. And it felt painful. And we didn't know... Just take a breath and take in where we are and who you're with.

And this story is a little bit the reverse of that, kind of. When it's going so fast, do you do that? Do you take it in? That's the only way to deal with time, no matter how fast it's going, be present. So it's about those themes of being present versus trying to beat time.

MF: The premise of the movie I found so intriguing, it's quick aging. Now it's not just physical aging though, it's also mental aging to go along with it.

Shyamalan: Yeah, that was a huge part of it. As I'm getting older, and thinking, I'm imagining how our minds are taking in information differently. And I find that a fascinating part about getting older, how your thoughts come to you differently.

And when I think about when I go see my parents and all, they think in much broader movements, and they take in things in a larger way than I do. And then I'm thinking in a slightly larger way than my kids do.

They're taking more frenetic energy and information in a different way. How we think changes. And that was a fun aspect of getting older on a beach, where you can actually realize your thoughts are changing because they're happening so fast. Hey, in the morning I was thinking this way, and now I'm thinking in a different way.

MF: What kind of discussions did you have with your younger actors, though? Because there is something like life lessons, right? As you grow older, and you do start thinking differently, you have though lived all those days, and you've actually experienced things to think that way, but really they haven't in this movie. They're just hour by hour getting older.

Shyamalan: It was a fascinating thing. I spent a lot of time with the actors saying, "This is not Tom Hanks in 'Big.' This is not you suddenly 40-year-old body, but you're 12 years old. You are thinking like a 40-year-old. Your mind is taking in information like a 40-year-old, but you have no life experience between 12 and 40. So it's a very fascinating contradiction. There's whole gaps in your knowledge, but I'm listening to you and taking in what you're saying in a different way than a 12-year-old would. So a very different kind of thing. The matrix of how you're taking in information is older, but you have no life experience." So it was fascinating conversations we had.

MF: The shooting location was beautiful, it was very claustrophobic, very prison-like. What was your overall visual style for the film?

Shyamalan: Oh, we had all kinds. We could go on forever about the visual language of the movie. We tried to have it a set of languages that the audience could feel. They wouldn't know it, but they would feel it. One of them, for example, is that the camera moves independently from the actors. So they're representing time's kind of, it's not connected to you. It just keeps moving and moving.

So it'll keep spinning around the actors, and your big events are happening off camera, and you're missing it. And you may catch it on camera, you may not, but you get that sense that the camera's moving of its own accord, just like time is. And we had lots of shots like that, even zooms like that, that are moving without regard to the characters. And they're just glancing the frame as you're focusing in on something.

Moviefone: I found the premise of this movie so intriguing. What was your initial reaction to the script?

Alex Wolff: I was shouting. It was so intense and so visceral. It's just beautifully written, too. And I was shocked. Jaw dropping, everything, but I think I was surprised by what an emotional movie it is. How deep the movie goes. So I think that's what my main response was. "Damn, he's going for it this time. He's really going for our hearts and our stomachs."

MF: And I think part of that is, because the movie's about aging, growing old very quickly, but it's not just physical aging, it's mental aging, I think, that gets you.

MF: What was your preparation for this? Because although it's very simple to say, "Oh yeah, now you're not six anymore. Now you're 30," or whatever, but your character, although is thinking like an adult at 30, you didn't have all those life experiences between six and 30.

Wolff: That's exactly what Night would say, too. So I found that to be hard. I found that to be, every day, a new struggle of how to exactly balance out both maybe some child psychological things of displacement and things of what kids deal with, with their bodies and how your arms are so long. And how you're looking at the sand, and it looks different as you get older, but then also having new emotional tools and new ways to express. And I just found that to be, every day was a full journey of discovery. But I did a lot of research of just reading a bunch of child psychology books. And Piaget and Bruno Bettelheim, and reading these books that clicked me into maybe some certain physical attributes that that kids have, or certain developmental issues or developmental processes that I didn't know about, I wasn't privy to. So I think that was part of the process. And then I had to just go back to re-examine who I was as a kid, and how I was, and face it, which is scary but fun.

MF: The adults in the movie, it's not so obvious that they're aging, but for the younger people, it's very obvious. What was that makeup process like for the aging?

Wolff: Well, you see that little boy in the trailer. That's actually me. I'm just kidding. No. That's another actor and he was amazing. And we had to all be in sync. So that was really fun. I did have someone come up to me on the street, though, yesterday. And they said, "Wait, so you're the little boy in that movie Old?" And I was like, "You're close, no cigar. No, I'm not six years old." I was like, "You're really close." And they couldn't figure it out. So they just walked away, and they were like, "All right, I know you're in that movie somewhere, but you don't look like you're six." And I was like, "Thank you."

MF: Hilarious. It's funny that they gave up and walked away, but in my mind, I'm like, "That's not so hard to figure out."

Wolff: That's how I felt, but I don't know. I did find it funny that they gave up too. And that they stayed for a long enough time that they could've thought, "Oh, you age in the movie," but no. “It was, you're either the six-year-old, or you're not in that movie.” And so I just went with like, "Okay, I guess I'm not in the movie." Meanwhile, then I turn around. There's a massive billboard for the movie.