Meryl Streep plays a female version of President Trump in an ‘Armageddon’ style-plot that mirrors the divisions in America created by the pandemic. 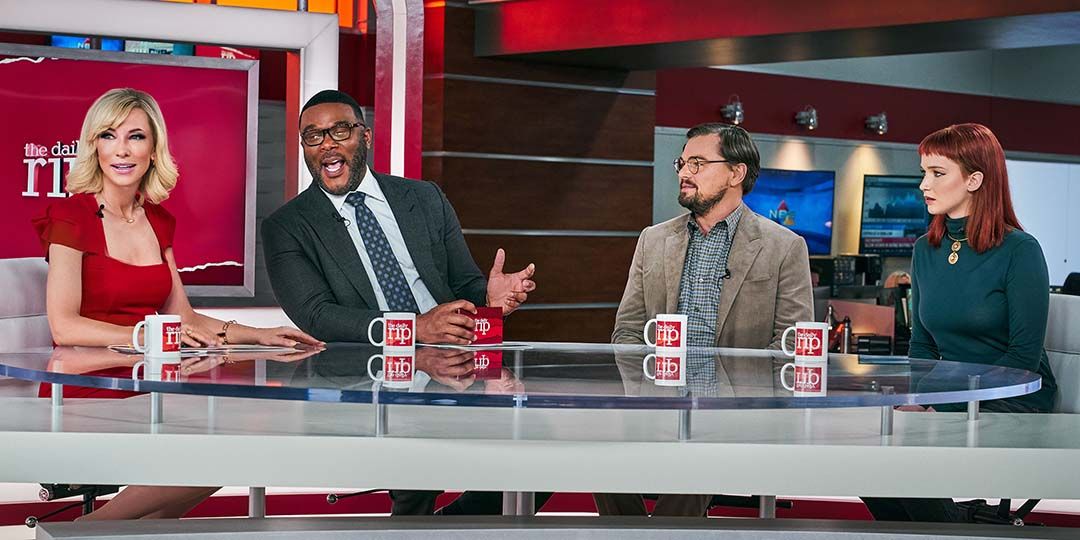 Currently in theaters before streaming on Netflix on December 24th is the new comedy from director Adam McKay (‘The Big Short,’ ‘Vice’) called ‘Don’t Look Up.’ The film is a political satire that follows two scientists as they desperately try to convince the media, the President, and a politically divided United States that an asteroid scheduled to collide with Earth in six-months will destroy all life on the planet.

The new movie features a very impressive cast that includes Oscar winners Leonardo DiCaprio (‘The Revenant’), Jennifer Lawrence (‘Silver Linings Playbook’), Mark Rylance (‘Bridge of Spies’), Cate Blanchett (‘Blue Jasmine’), and Meryl Streep (‘The Iron Lady’), as well as Jonah Hill (‘Moneyball’), Tyler Perry (‘Gone Girl’), Timothée Chalamet (‘Dune’), Ron Perlman (‘Drive’), and pop singer Ariana Grande. The result is a clever comedic satire that has something important to say about the world we live in and presents it in an entertaining way with fantastic over-the-top performances from the entire cast.

The film begins when astronomers Kate Dibiasky (Lawrence) and Dr. Randall Mindy (DiCaprio) discover an asteroid larger than the one that wiped out the dinosaurs will crash into Earth, destroying all life in approximately six months. They immediately notify NASA and are sent to Washington to debrief President Orlean (Streep) and her son and Chief of Staff, Jason Orlean (Jonah Hill). However, preoccupied with getting her Supreme Court nominee passed by the Senate and a personal scandal of her own, President Orlean dismisses the scientists and declares that they will “sit on this,’’ and not report it to the media.

Frightened for the future of mankind and not trusting that the President will do the right thing, Mindy and Dibiasky contact a newspaper and agree to go on a popular political morning show hosted by Brie Evantee (Blanchett) and Jack Bremmer (Perry). But when the talk show hosts don’t take the scientists seriously, Kate loses her composer and blurts out on TV that “everyone is going to die.” In the aftermath, Kate becomes a national laughingstock and Dr. Mindy becomes a hero for being the “handsome scientist.” He eventually gets caught-up in his own celebrity and leaves his wife and family for a relationship with Brie. But, when the President’s approval ratings begin to go down, she starts to take the crisis seriously, realizing that saving the planet is the only way she will be reelected.

Working with the scientists, the President enacts a plan to send Colonel Ben Drask (Perlman) into space to blow up the asteroid. However, just as the plan is about to work, tech billionaire Peter Isherwell (Rylance) contacts the President asking her to abort the mission, and she agrees, much to the dismay of Randall and Kate. Isherwell has discovered that the precious minerals required to make cell phones and computers will soon be depleted on Earth, and that the asteroid possesses an endless supply of the needed materials, which will make them billions of dollars in the process. Their plan is to allow the asteroid to get into our orbit, then send tiny drones to land on it and begin drilling so that pieces fall to Earth but are small enough that it does not destroy it. This news divides the country, with those against it trending on Twitter with #JustLookUp, and its supporters chanting at rallies, “Don’t Look Up.” As the world debates and waits to see if Isherwell and the President’s plan will work, Kate and Randall try to pick up the pieces of their own personal lives, which have been devastated by their new-found celebrity.

Writer and director Adam McKay, who began his career helming Will Ferrell comedies like ‘Anchorman’ and ‘Talladega Nights,’ made a stark turn to political satire with 2015’s brilliant ‘The Big Short,’ which earned him an Academy Award for Best Adapted Screenplay. He followed it up with the 2018 biopic ‘Vice,’ which also earned him Oscar nominations for Best Director and Best Adapted Screenplay. ‘Don’t Look Up’ is not quite as good as ‘The Big Short,’ which in my opinion is a recent classic. But it is a much stronger film than ‘Vice,’ which was a slow movie that was really only carried by Christian Bale’s commanding performance as former Vice President Dick Cheney. Basically, using the plot of ‘Armageddon’ as a mirror to the pandemic and how our divided country became more divided because of a worldwide health crisis, was a stroke of brilliance and creates the poignant comedy of the film.

McKay’s script also spoofs several real-life people, as Streep and Hill are clearly playing Donald Trump and Jared Kushner, respectively, Cate Blanchett is a version of cable news hosts Megan Kelly and Mika Brzezinski, and DiCaprio’s Dr. Mindy is a substitute for Anthony Fauci. But while the world of ‘Don’t Look Up’ clearly mirrors our own, McKay makes it clear that this is a fictional universe as comedian Sarah Silverman and journalist Ashleigh Banfield play characters similar to whom they really are, a podcast host and a reporter, respectively, but are given fictional names to demonstrate that this is not happening in “our” world yet, but it certainly could.

While I loved almost all of the performances, let me start with the one I liked the least, and that was Mark Rylance. The Oscar winner is playing Peter Isherwell as a Steve Jobs/Jeff Bezos/Elon Musk type of character, and he does it quite well, except he’s basically playing the same role he did in ‘Ready Player One.’ Since the characters are so similar, I would have appreciated another casting for Isherwell, or at the very least having Rylance portray the character in a different way.

Jennifer Lawrence and Leonardo DiCaprio give very strong comedic performances and have a nice chemistry together in the film. They both balance the comedy and drama well, but it's DiCaprio who is surprisingly hilarious as a decent family man who gets wrapped up in his own celebrity. Lawrence’s character is a little one-note for the first half of the film but reaches a new level when paired with Timothée Chalamet in the third act. Rob Morgan (Mudbound) is also worth mentioning and is very good as a scientist who helps Randall and Kate.

Tyler Perry and Cate Blanchett steal every scene they are in as a mock-version of MSNBC’s ‘Morning Joe,’ but it's Blanchett who is truly wonderful as a news anchor more obsessed with power and celebrity than the truth. She is the character that tries to corrupt Dr. Mindy and challenges his values, and the actress is great opposite DiCaprio. I think Blanchett’s performance is so good that she would definitely be nominated for a Best Supporting Actress Oscar if it wasn’t for one thing … and that one thing is Meryl Streep!

Meryl Streep’s brilliant and commanding performance as essentially a female version of Donald Trump is all anyone is going to talk about after seeing this film and unfortunately, it will take the oxygen out of any conversation that might have taken place about nominating Blanchett. In some ways, correctly so, as Streep is certainly the comedic centerpiece of this film and gives a completely believable over-the-top performance. Streep will probably get a Best Supporting Actress nomination for her role, as she usually gets nominated for just about every film she makes. But this time it will be well deserved as the movie only works if you buy into her ridiculous character, which thanks to her performance, you do.

I also have to mention Jonah Hill, who as the President’s son and Chief of Staff, gives one of the most sarcastic, funny yet mean-spirited performances of his career. The actor creates a pathetic and outrageously obnoxious character that you absolutely hate but still look forward to seeing in every scene he’s in because you know he’ll have the funniest lines. In the end, Adam McKay has delivered another funny, smart, and poignant political satire, the kind of movie that is not made much anymore, that features strong performances and an important story that reflects our own society.

Alexander Payne to Direct 'The Menu,' Adam McKay and Will Ferrell to Produce