Movie Review: ‘Spider-Man: No Way Home’ Fully Delivers On All Its Promises And Is A Love Letter To Fans

The most anticipated film of the year is a cinematic extravaganza that not only acts as a brilliant end to Tom Holland’s MCU Spider-Man trilogy, but also pays homage to everything that has come before. 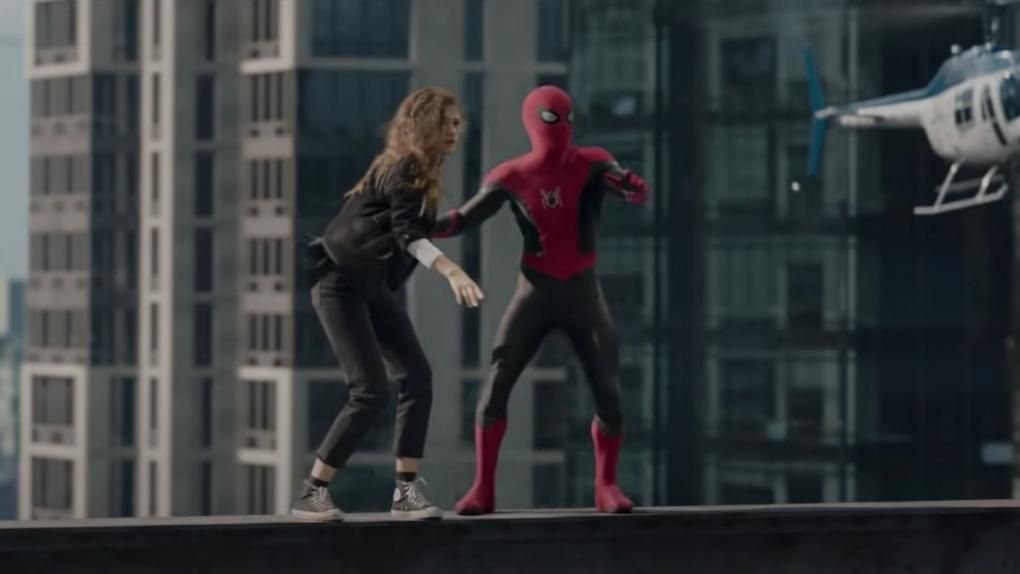 Tom Holland and Zendaya in 'Spider-Man: No Way Home'

The wait is finally over as the most anticipated film of 2021, ‘Spider-Man: No Way Home,’ is now in theaters. Much has been said about this film, who will be in it and who will not, but now audiences will be able to see for themselves, and they will not be disappointed. The film marks the third solo outing for Tom Holland’s Spider-Man, as the hero finds his secret identity exposed in public and asks Doctor Strange (Benedict Cumberbatch) for help. But when Strange’s spell goes wrong, and Spider-Man villains from other universes begin to invade our Earth, Peter Parker and his friends must find a way to stop them before they destroy our world.

In addition to Holland and Cumberbatch, the movie also stars several other MCU actors including Zendaya as MJ, Jacob Batalon as Ned Leeds, Jon Favreau as Happy Hogan, and Oscar-winner Marisa Tomei as May Parker. The film also features actors from other Spider-Man movies reprising their roles like Willem Dafoe as Green Goblin from ‘Spider-Man,’ Alfred Molina as Doctor Octopus from ‘Spider-Man 2,’ Thomas Haden Church as Sandman from ‘Spider-Man 3,’ Rhys Ifans as Lizard from ‘The Amazing Spider-Man,’ and Jamie Foxx as Electro from ‘The Amazing Spider-Man 2.’ The result is a well-crafted and extremely entertaining love letter to Spider-Man fans that completely lives up to all of its outrageous expectations and is one of the best Spider-Man movies of all-time.

The film begins almost exactly where “Spider-Man: Far from Home’ left off, with Peter Parker (Holland) being outed publicly by Mysterio (Jake Gyllenhaal) as both Spider-Man and a murderer. The news completely changes Peter, his family and his friends’ lives, and in order to “fix it,” he asks Doctor Strange (Cumberbatch) to cast a spell so the world forgets he is Spider-Man. But while casting the spell, Peter tries to change it so his girlfriend MJ (Zendaya), his Aunt May (Tomei), and best friend Ned (Batalon) don’t forget, and creates a chain of events that sees Spider-Man villains from the multiverse ascending on our Earth. To right their wrongs, and stop the multiverse from being destroyed, Strange tasks Peter, MJ, and Ned with collecting the villains and sending them back to their own world, where they will ultimately die. Peter can’t stand the idea of essentially sending these villains to their death, and after encouragement from Aunt May, he defies Strange’s wishes and vows to find a way to save the multiverse without killing his enemies.

If you have been following the production of ‘Spider-Man: No Way Home’ for the last year or so, then you know there have been dozens of rumors about which former Spider-Man movie actors and actresses might appear in the film, and I will neither confirm nor deny any of them. But since Sony wisely revealed the five former Spider-Man movie villains that appear in the movie before its release, I feel it’s safe to talk about them. Obviously, Willem Dafoe and Alfred Molina get the most screen time as they are clearly the most beloved of the five villains included, and both actors returned to their roles exceedingly well. They both have the opportunity to play with elements of their characters that were not developed as much in their previous incarnations, especially Dafoe, whose “Dr. Jekyll & Mr. Hyde” complex is better explained this time around. While Molina has a chance to play with the “Am I a villain or not?” aspect of his character that was only touched upon in the final moments of “Spider-Man 2.”

The remaining three villains, Electro, Lizard and Sandman, are all somewhat polarizing characters from former Spider-Man movies that didn’t quite work in their previous incarnations. But in ‘Spider-Man: No Way Home,’ they are redeemed and allowed to be closer representations of their comic book counterparts. Jamie Foxx’s Electro is probably the best example, as fans hated his unusual blue form in ‘The Amazing Spider-Man 2.’ While it is referenced in this film, the character quickly becomes something new, which is closer to the Electro from the source material, and you can tell Foxx is enjoying his second chance at getting the role right.

Oscar-nominee Thomas Hayden Church as Flint Marko/Sandman was not the problem with ‘Spider-Man 3,’ an over-bloated script with too many characters was, so it was nice to see him return as well. The filmmakers chose to keep Marko in his Sandman form through most of the film, which really works, and the CGI is fairly flawless. Unfortunately, Rhys Ifans’ Lizard gets the least amount of screen time, and while it is difficult to relate to a character that is basically a monster, the actor is given a few moments to shine. That being said, the returning villains all get better treatment this time around, and while technically they are the “Sinister Five” and not the comic book team known as the “Sinister Six,” this is certainly the closest we’ve ever gotten to seeing the infamous group of Spider-Man villains all on screen together in live-action fighting Spidey at the same time.

At the risk of giving away spoilers, I will just say that there are some very cool “unexpected” appearances in the film, and with the exception of only one, they are much more than just cameos. The actors or actresses in question are allowed to really develop their characters and are integral to the plot and are not just in the movie as fan-service. I’m not denying that the film utilizes a lot of fan-service, but it is always in line with the story they are telling, and never feels forced or cheap. Yes, there is a mid-credit scene, while I won’t tell you what it is, I will say that it ties up loose ends from another popular mid-credit scene. There is also an end-credit tag, which is more than just a scene, and sets up a future MCU movie. Think the ‘Avengers’ trailer that ran at the end of ‘Captain America: The First Avenger.’

But for all the multiverse shenanigans and other franchise actor appearances, ‘Spider-Man: No Way Home’ works best as a coming-of-age love story between Peter Parker and MJ. Building on their previous MCU outings, the relationship between Peter and MJ, and to a lesser degree Peter and Ned, is really at the heart of the movie. Even though the plot is somewhat outlandish, it is always grounded by those simple relationships in Peter’s life, including his bond with Aunt May. As MJ, Zendaya embodies the modern-day superhero girlfriend, not a woman who stands on the sidelines waiting to be saved, but a heroine in her own right, in the thick of the battle with her hero boyfriend. She also happens to have some of the best lines in the film. But it's Tom Holland who has really brought Peter Parker and Spider-Man back to his roots, playing the character as a young man trying to find his way through the world, even with amazing powers. Holland is charming, loveable, and sympathetic all at the same time and will be the one true Spider-Man for generations to come.

Fans who have been waiting for the MCU to adapt certain elements of the Spider-Man mythos that have yet to be utilized will be very happy with this film, as the “With great power comes great responsibility” speech and other iconic moments from the source material are captured in the movie. For obvious reasons, ‘Spider-Man: No Way Home’ feels like a live-action ‘Spider-Man: Into the Spider-Verse,’ but is so much more than just that one gimmick and in many ways feels like the most authentic Spider-Man movie yet. The film really sticks to the ideals that comic book legends Stan Lee and Steve Ditko created in the comic books all those decades ago. In the end, ‘Spider-Man: No Way Home’ is an entertaining and exhilarating movie that delivers on all its outrageous promises and expectations while building on the MCU’s Spider-Man by paying homage to all that has come before it. Not only is ‘Spider-Man: No Way Home’ the best of the solo Tom Holland movies, it is one of the best MCU films, and possibly even the best live-action Spider-Man movie ever made.

Marisa Tomei 'Quite Disappointed' One 'Spider-Man: Homecoming' Scene Was Cut

Here's How Much Spider-Man & Aunt May Will Be in 'Avengers: Infinity War'