Maitreyi Ramakrishnan and Cast Talk ‘Never Have I Ever’ Season 3

Moviefone speaks with Maitreyi Ramakrishnan, Darren Barnet, and Jaren Lewison about the third season of their popular Netflix series.

Premiering on Netflix on August 12th is the third season of the popular series, ‘Never Have I Ever,’ which was created by Mindy Kaling and Lang Fisher.

Moviefone recently had the pleasure of speaking with Maitreyi Ramakrishnan, Darren Barnet, and Jaren Lewison about Never Have I Ever’ Season 3. 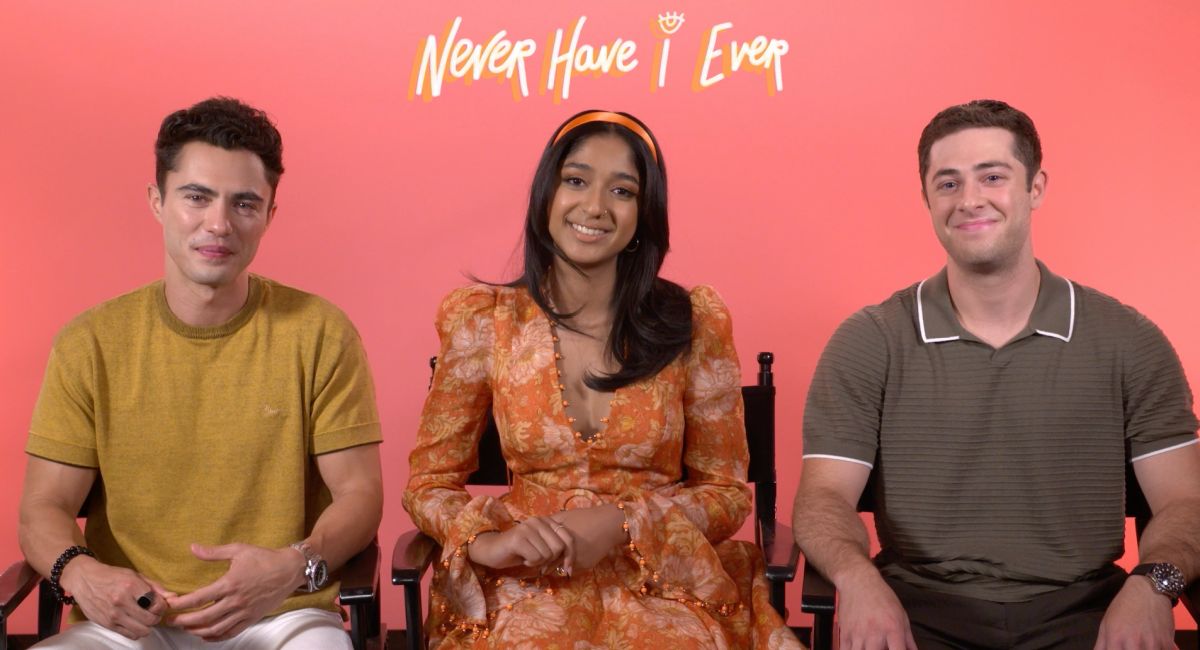 (L to R) Darren Barnet, Maitreyi Ramakrishnan, and Jaren Lewison star in Netflix's 'Never Have I Ever,' season 3.

You can read the full interview below or click on the video player above to watch our interviews with Ramakrishnan, Barnet, Lewison, Poorna Jagannathan, Richa Moorjani, Ramona Young, Lee Rodriguez, and Megan Suri.

Moviefone: To begin with, Maitreyi, how is Devi handling her new relationship when this season begins?

Maitreyi Ramakrishnan: I mean, pretty much what you think Devi would be like if she was handling a relationship. It’s messy, as she does. But it's exciting for her because it's her first real relationship, where she's actually committing to one guy.

So, good job, Devi. Making real strides. She’s pined over him for years and it's happening. It's very exciting for her, but of course it doesn't come without its challenges.

MF: Darren, Paxton seems to be taking this relationship more seriously than Devi, is that fair to say?

Darren Barnet: I think you've seen Paxton kind of get in his head about not wanting to be seen with the girl that got me hit by a car. There was a lot of ego involved there. I think a lot of that is dropped as they enter this relationship. A lot of those cares go away, and he realizes how much he actually likes her, and how much she challenges him.

It's been a wild ride, and like Maitreyi said, you will see how Devi handles this, and it’s exactly the way you would think. Once you get what you've wanted for so long, you start to realize, "I've done so much work, trying to attain this, I haven't done any work on myself for preparing for it.” I think that shows a lot.

(L to R) Darren Barnet as Paxton Hall-Yoshida, and Maitreyi Ramakrishnan as Devi in 'Never Have I Ever.' Cr. Lara Solanki/Netflix © 2022.

MF: Jaren, how is Ben handling seeing the new couple?

He’s challenging her and she’s challenging him, trying to keep those feelings at bay and trying to be a good boyfriend for Aneesa. As we can see, it's a little more difficult for him than maybe I would've liked, if I was rooting for him. But, you know, what are you going to do?

MF: Maitreyi, when a new season begins do you get all the scripts at once or episode by episode?

MR: Most certainly we do not. Pretty much like a week before we start filming, we get the first episode’s script, and then we keep going. So, as we film, we find out what happens, which honestly, I like. I enjoy that. It keeps us on our toes and it doesn't give us too much information right away.

So, we don't know how it's going to end while we're starting. So, we get to really go with the flow with the characters, experience those stakes and we get excited. We get to be fans for a little bit and we do anticipate, “Wait, what do you think is going to happen?” That's how it really goes every season.

MF: Finally, Darren, when you get a new script, are you surprised by the different directions the writers take your character?

DB: I think the writers make it very easy because they a hundred percent know who Paxton is. It's pretty automatic for me to switch into it. But I do enjoy that I think he's become a more multidimensional character as we've developed throughout the show.

I don't know if that was intended upon starting season one, but they've allowed that to happen. So, it's given me a lot of room to play, and I have wonderful co-stars to work off of who help me grow into that and make it an easy and very fun job. So, no, I've never shocked. I'm always very pleasantly surprised.

(L to R) Jaren Lewison as Ben Gross, and Maitreyi Ramakrishnan as Devi in 'Never Have I Ever.' Cr. Lara Solanki/Netflix © 2022.