Moviefone speaks with Spider One about his new movie. "The horror fan base is so supportive, I feel like it's a weird misfit club that everyone's connected to."

Premiering On Demand and streaming on Shudder beginning August 2nd is the new horror movie 'Allegoria,' which was directed by Powerman 5000 frontman Spider One (MTV’s ‘Death Valley’).

The movie revolves around a group of artists whose lives become unwittingly entangled as their obsessions and insecurities manifest monsters, demons and death.

Moviefone recently had the pleasure of speaking with musician-turned-filmmaker Spider One about his work on 'Allegoria,' writing the screenplay, it's different vignettes, his directing style, and why the genre is so popular. 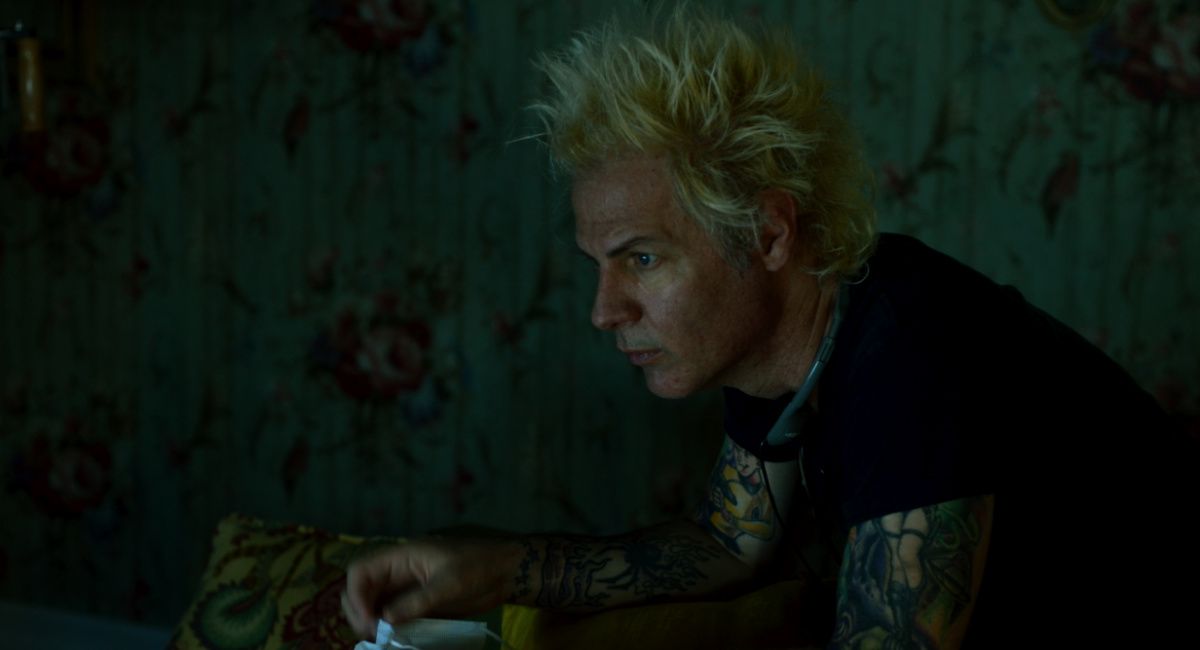 Director Spider One on the set of 'Allegoria.'

You can read the full interview below or click on the video player above to watch the interview.

Moviefone: To begin with, can you talk about developing the screenplay for ‘Allegoria’ with actress Krsy Fox?

Spider One: For me, I always think that being a creative person is like being in the mafia. In other words, I remember this scene in I think ‘The Godfather Part III’ where Al Pacino says, “Every time I try to get out, they pull me back in.” I feel like that is the obsessive nature of being a creative person.

This concept started to revisit in my brain the idea that art and horror share many similar descriptive patterns. In other words, we always discuss the tortured artists, suffering for your art, selling your soul, all this kind of stuff. I was like, what a great untapped idea to take these obsessions that artists have and the insecurities and egos that we all share, and then just heighten them to horrific levels.

So that's really how it all began for me. It’s really a life I've always lived. Fortunately, it hasn't at this point manifested to actual demons and monsters, but there's plenty of time for that.

MF: The movie unfolds in different vignettes, at times did it feel like you were making several different movies?

SO: I really wanted to put a concerted effort into not make it a traditional anthology, meaning that most anthologies are stories that don't connect. They're just separate stories, and maybe there's some sort of narration between them. I really wanted to create something that felt connected. That's why I kind of had to reverse engineer it because that wasn't the idea to begin with. To begin with it was just, let's see if I can make a movie.

So, then it became a really fun challenge to find ways to connect these characters in these scenarios without necessarily having them in the same room together. When you do watch the film, you start to realize that essentially story number five really is story number one. If you chose to watch it in a loop, then it all makes sense how this stuff starts happening to these poor people.

MF: This is your first feature film as a director. How did your experience as a musician, writer and producer prepare you to make this movie?

SO: Most of my background has always been music, and it's a very different process. Music is a much more immediate visceral moment. You get on stage, whatever's going to happen is going to happen. If the guitar's not working, you got to keep playing. Whereas film, if something's not working, you can stop and do it again. But essentially, it's all about communicating. It's really about communicating an idea and emotion, and in certain regards, manipulation of your audience.

So, in that way, I feel like being a musician and having performed for so many years has really helped me figure out ways to connect with people. Then I had spent some time producing a TV show, and that was a crash course on all levels of learning about every single department, which has served me well.

MF: One of the vignettes in the movie features a man making a deal with the devil to become a rockstar. Was that inspired by your own experiences working within the music industry?

SO: Well, it's interesting. That scene, this is a perfect example of sometimes what you're dealt with can change the script. So originally that whole thing of Adam Busch's character confessing his desire to be a rock star when he was a kid was not in the script. It wasn't until I found that location because here's a wall of vinyl albums, and there's a piano in the room.

I don't think we really featured it, but the environment made me realize, this guy has to love music, or he wouldn't have all these records. So, I can't even remember originally what it is that he confessed that he wanted to be, but just the actual environment made me change it to that. So, sometimes happy accidents can happen, and it made the scene much better than it ever would've been.

MF: Each vignette is completely different and has a different mood and tone from the others. Did you try to give each sequence its own directing style?

That really wasn't a product of being limited. It was an intentional thing. I love that aesthetic because I think it creates a more realistic tone, you feel like you're really there. Whereas when the camera starts doing really fancy things, flipping around and flying through the room, personally, that takes me out of it.

So, I tried to maintain that very simple approach that I see when I would watch the original ‘Halloween’ or ‘Taxi Driver.’ Even Stanley Kubrick to a certain degree, as masterful as he was, there was not a ton going on.

I like the idea of letting the scene play out. I always try to tell the actors that, so they know from the beginning because I might want to shoot the whole thing straight through without stopping. I feel like it builds a lot of tension to just keep that camera steady and on someone's face and not move.

MF: Finally, can you talk about your own love for this genre? When did it begin for you personally, and why do you think the genre is so popular and beloved by fans?

SO: I feel very fortunate to have grown up in the seventies and the eighties. I feel like it was the pinnacle of weirdness, when movies were made that probably would never get made today. I remember Saturday morning cartoons too and everything was based around monsters and music.

So, I think that just sunk into my DNA at a very early age. I also was a teenager in the era of the VHS tape. So, you'd go get on your bike and ride to the local video rental store. You'd head straight to the horror and sci-fi section and look for the grossest cover art you could find and take that home. You really felt like you were in an exclusive club.

I feel like that's why the horror genre and the horror fan base in particular is so devoted and so supportive most of the time, because I do feel like it's a bit of a weird misfit club that everyone feels connected to. I think that for me was probably what made me most attracted to horror, sci-fi, and comic books.