Opening in theaters, On Demand and digital beginning June 24th is the new Western ‘Murder at Yellowstone City,’ which was directed by Richard Gray (‘Robert The Bruce’).

When a prospector is found dead in Yellowstone City, Sheriff Ambrose (Gabriel Byrne) quickly arrests the town’s newcomer and former slave, Cicero (Isaiah Mustafa). The town’s new preacher, Thaddeus Murphy (Thomas Jane) and his wife Alice (Anna Camp) soon discover Cicero is innocent and now must stand up to the Sheriff in order to bring the true murderer to justice.

Thomas Jane has appeared in dozens of popular movies including ‘Face/Off,’ ‘Boogie Nights,’ ‘The Thin Red Line,’ ‘Magnolia,’ ‘61*,’ ‘Dreamcatcher,’ ‘The Mist,’ ‘Scott Pilgrim vs. the World,’ and ‘The Predator.’

But he is probably best known to Marvel fans as Frank Castle in 2004’s ‘The Punisher.’ He currently stars as Ted Conkaffey on the Freevee series, ‘Troppo.’

Moviefone recently had the pleasure of speaking with Thomas Jane about his work on ‘Murder at Yellowstone City.’ 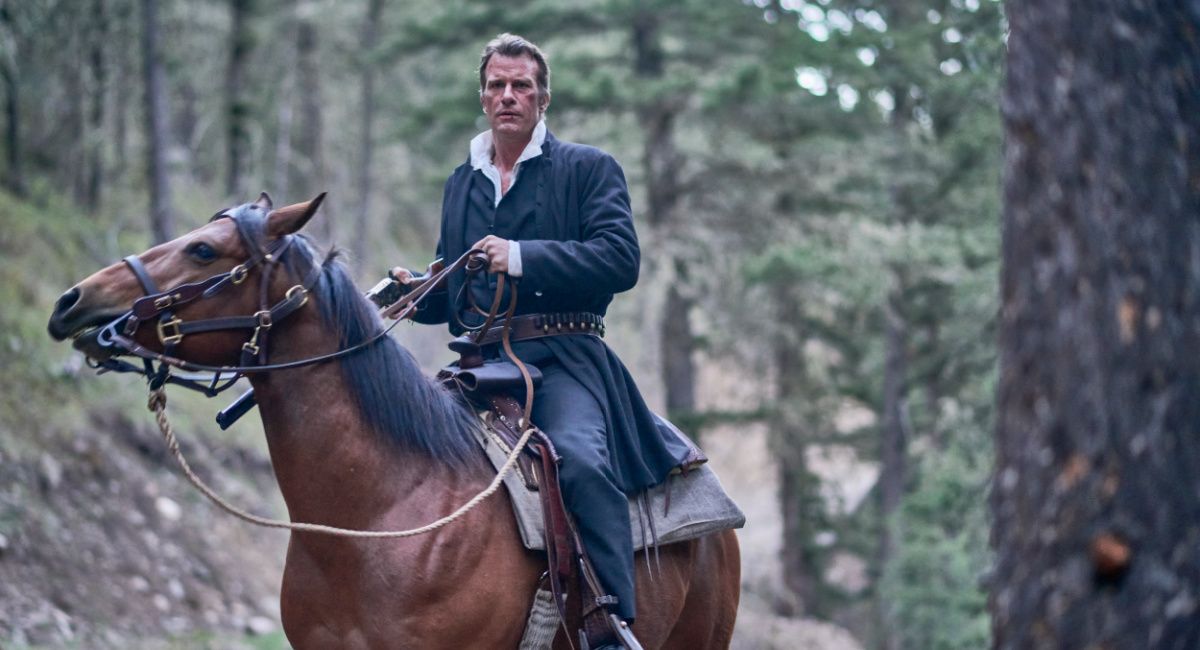 You can read our full interview below or click on the video player above to watch our interviews with Jane, and director Richard Gray.

Moviefone: To begin with, how did you get involved in this project and what was your initial reaction to the screenplay?

Thomas Jane: Me and my partner Courtney Penn started a production company in 2019 called Renegade. Renegade's logo is a horse made out of fire. So, it was natural for us to be attracted to Westerns and to have Westerns sent to us. This was the second Western that we did that we shot in 2020. The first was called ‘The Last Son’ and that's come and gone.

This one we're real proud of. It's a script that came across our desk and we thought "this is a classic Western that does good things with the genre, but doesn't break the genre or step outside of it, or try to twist it around in some funny way, like bringing aliens in." Not that there's anything wrong with that. But this was a classic Western and when they work, they work. They've been around for a long time for a reason.

It's that tension between the individual, the freedom of the individual and the town, which is society, the rules of society and the morals of society that can be constricting in some ways. Yet you need the society in order to survive. No man is an island, but there's always an outsider. The outsider comes into the town. The town is either a good town, full of decent people, but ultimately weak and in need of protection, open to the predations of villainous and murderous men.

Or the town is a strong town, but bad. There's a corrupt sheriff, there's some corruption creeping through the veins of the town, keeping people off balance. In both cases, a hero is needed from the outside to come in and at first, he's shunned and then he's needed. Then at the end, he has righted some wrongs, stomped out some evil and rides off into the sunset.

That's the basic Western. There’re different variations on that theme. There's the vengeance theme, which we have a little bit. There's the professional theme, which came around in the 70’s. It was with Lee Marvin's ‘The Professionals,’ and ‘The Wild Bunch’ with William Holden. This was a new twist. It really didn't exist before the late 60’s and 70’s where you had a group of professional gun fighters. It was always a group. It's a group of pros and they've come in and they don't care. They're just being paid to do their job. Along the way their own morality is challenged and then they have to step up and write the wrongs because wrongs need righting.

MF: Director Richard Gray has referred to you as a “Western movie expert.” Do you agree with that statement and how did your work on previous Westerns prepare you to make this movie?

TJ: On both films we were lucky enough to meet and then work with the Schultz brothers who are a group of horse wranglers that live in the Dakotas and they are expert horsemen. The value of good horsemen to a Western, you can't put a price on it. It is absolutely necessary in order to get your shots on time, to make your days, to get what you need out of the actor and the horse when they're working together, it's vital. So, I'm very happy to have teamed up with the Schultz brothers, plan on doing that again many times.

My experience with the Western mostly comes from watching them with my dad. The Western is such a father/son relationship and me and my dad on the weekends would sit down and pop in a Western. We had a lot of great times, a lot of great discussions and a lot of interesting insights into what it meant to be a man, and what it meant to be a good man. The role of masculinity in society, how that role is both needed and despised, and how that changes over the years and the decades.

It's a purely an American invention, the myth of the American West. It's like baseball and jazz. These are real American products and it spread all over the world, and now you find Italian Westerns, Japanese Westerns, Bollywood Westerns. So, it speaks to people. It doesn't really matter where you're from. It speaks to people who live in a society, the rights and the wrongs and the morality of that. It's changed over the years.

The classic Western always had a damsel in distress. She represented the weak society that needed protecting from the bad guys, and the hero would step in and say, "get behind me, woman." He would take care of business. But then the 60’s came around and that evolved to a woman that was strong enough to be the hero's equal. They would partner up as a couple and then take on the bad guys. That evolution you didn't see before the 60’s or 70’s.

Then the Western died in the eighties. There were no Westerns in the 80’s. ‘Heaven's Gate’ in 1980 killed it. It was a huge movie and a financial disaster. It's actually a very good film if you watch the director's cut. It is really good, and a real tragedy that the movie didn't do better. But that killed the Western for the 80’s.

Then they revived again in the 90’s with ‘Dances With Wolves’ and ‘Unforgiven.’ Then you the variations start to creep in like ‘Desperado,’ or ‘The Quick and the Dead,’ where you had a strong female character taking over the role of the hero. Then ‘Posse,’ when you had a black man step up as the hero. So, we started seeing variations. Some of those variations worked better than others. You can bend the genre, but you can't break it.

Hopefully people have tuned into that now because it plays a very specific role in the American psyche. If you mess with it too much, then it no longer plays that role and then Westerns die again for another 10 years.

(L to R) Isaiah Mustafa and Anna Camp in 'Murder at Yellowstone City.'

MF: A lot of clues about your character’s past are given with very little dialogue, but its’ clear from your behavior that he hasn’t always been a preacher. Can you talk about creating his backstory for yourself and how that helped you create the character?

TJ: I like that you mentioned that we accomplished it with very little dialogue. I'm a big fan of stripping away as much dialogue as you can and leaving only the essentials, letting the audience put the pieces together. That's how I like to watch movies. I like to watch movies that aren't spoon fed, that respects my intelligence enough that I will be able to put the pieces together without having somebody give a long speech.

We accomplished that, me and Richie Gray went through the script and we were able to excise as much material as we possibly could in order to boil it down to its essentials. That allows the audience to fill in the blanks with their own imagination, much like you do when you read a novel. That's always the goal, so it's nice to hear you say that.

MF: Finally, I understand that this is the first Western that Gabriel Byrne has ever made. What was it like for you working with him on this film?

TJ: As he gets older, he has got a great face for Westerns. I think Westerns are all about faces. Sergio Leone, you look at those movies, you look at the smaller characters and the faces, the grit, the grime and the sweat, but they always had these faces that were hard road. They've been ridden hard. You really got that sense that life was tough. It was nasty, brutish, and short, and people were lucky to be alive every day. You could be wiped out any day by the simplest thing. Step on a rattlesnake while you're digging a grave. So that has always appealed to me.

Byrne is a classically trained, and a wonderful actor. He's got a great voice. I love the Irish brogue. I love the fact that Westerns are all about immigrants, and there were a lot of immigrants coming in. So, you got a Swedish accent, or an Irish accent, or a British accent. They were all coming in. I like that aspect of the reality that we bring to it. Gabriel is a pro, he's a real pro and he was a lot of fun to work with.

'Murder at Yellowstone City' will be in Theaters, On Demand and Digital on June 24th.

"In a town of suspects, one man stands accused."
Not Yet Rated2 hr 6 minJun 24th, 2022
Watch Murder at Yellowstone City Online