‘Cobra Kai’ is Back as The War for The Valley Intensifies

‘Cobra Kai’ keeps on expanding its story as Daniel LaRusso and Johnny Lawrence look to fight back against the machinations of Terry Silver. 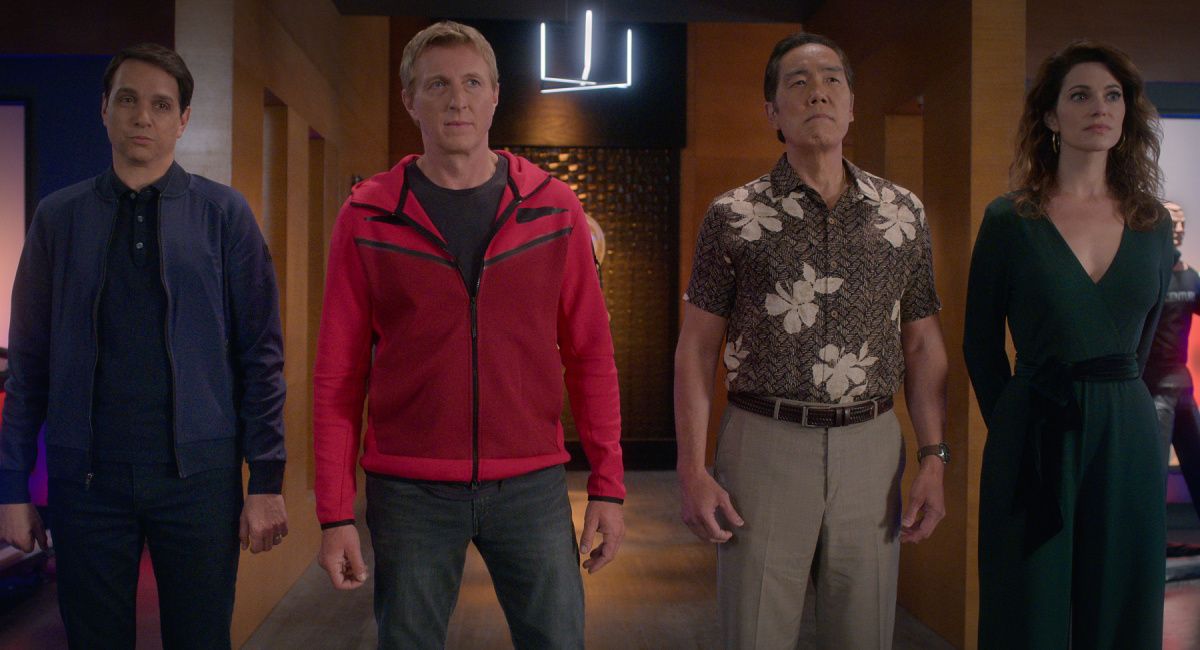 ‘Cobra Kai’, which just returned to Netflix, has reached Season 5, an accomplishment even its creators might be surprised to see.

The series, which continues the story from 'The Karate Kid’ movies (the first three, at least), has become one of Netflix’s most entertaining titles, walking the line between camp and cult comedy drama, all while finding new ways to explore its various characters.

We’re a long way from where we started – the show kicked off by catching up with rivals Daniel LaRusso (Ralph Macchio) and Johnny Lawrence (William Zabka) 30 years since the events of the ‘Karate’ movies. While Daniel is a happily married, settled and slightly smug owner of several car lots, Johnny is down on his luck, the former bully now making ends meet in a crappy apartment building where he’s also the manager.

Their reunion was far from peaceful, the old resentments bubbling to the surface once more as Johnny looked to restart the Cobra Kai dojo to help get his life back on track and Daniel, in response, launched the Miyagi-Do dojo named for his old master Mr. Miyagi (the late Pat Morita) in the house that Miyagi left Daniel in his will.

Since then, Johnny and Daniel have come to more of an understanding, and even managed to find common ground, joining forces to work against the ever-more powerful Cobra Kai facility, snatched from Johnny first by his own old master, John Kreese (Martin Kove) and now in the hands of the scheming Terry Silver (Thomas Ian Griffith) from ‘The Karate Kid Part III’

As Season 4 closed out, Silver’s students triumphed at the All-Valley Karate tournament, and thanks to Johnny and Daniel’s misplaced bravado, they’d promised to close down their dojos if Cobra Kai won.

Season 5 opens shortly afterwards, with Silver plotting to expand Cobra Kai’s footprint in both the San Fernando Valley and beyond, looking to take his merciless style of martial arts tuition nationwide.

Naturally, our heroes react to this news in different ways. Daniel retreats back to business and family, looking to get out of karate altogether (you can guess how long that lasts), while the more bullish Johnny looks to fight back, but not before figuring out how to bring in more money by figuring out how to drive for ride share services and food delivery apps.

Given that Johnny’s attitude is still firmly in the 1980s and rock/metal music, he doesn’t exactly rack up the five star reviews in one of the show’s trademark, funny Johnny-is-bad-at-modern-life montages.

There’s also the small matter of tracking down Miguel (Xolo Maridueña), who headed off to Mexico to find his real father.

Because the show is never just about Daniel, Johnny or the other adults in the story. In expanding the narrative from the beginning, creators/show-runners Josh Heald, Jon Hurwitz and Hayden Schlossberg cannily created a cadre of students around the main characters so as to provide plenty of plots to follow.

In the past, some of these have proved less entertaining than the evolving lives of Johnny and Daniel, dipping into schmaltzy teen romance and rivalries of their own, but they’ve also grown and developed, and we’ve learned to like such characters as Miguel (one of Johnny’s earliest students, and son of Lawrence’s girlfriend Carmen, played Vanessa Rubio), Hawk (Jacob Bertrand), Tory (Peyton List), and Robby, Johnny’s actual, formerly estranged son (Tanner Buchanan).

For Daniel’s part, his family all have their roles to play, particularly daughter Samantha, a fervent follower of Miyagi-Do karate who spent much of last season dealing with trauma after an attack by Tory. She’s on a more even keel here and can fully participate in the battle against Cobra Kai.

Yet even Tory, who was one of the villainous Dojo’s champions, is beginning to suspect that all is not well under Terry Silver, leading to some fun digging into ways to take him down.

Finally, there’s former Cobra Kai boss Kreese, languishing in the slammer and largely playing out prison drama for most of the season.

A true highlight of this latest season is Yuji Okumoto’s Chozen, who movie fans will know as Daniel’s big rival in ‘The Karate Kid Part II’. Re-introduced in season four as a much more balanced, calm individual (though still highly skilled with fists and feet), he’s become something of a friend and mentor to LaRusso and provides both the most memorable action and laughs in the show, especially the scene where he trains the combined Miyagi-Do and Eagle Fang teens in ways to fight back against the highly trained, vicious Cobra Kai students.

Though it might not quite go as big as some previous seasons (there is nothing to quite match the ever-expanding high school rumble that closed out Season 2 or the siege of the LaRusso house at the end of Season 3), Season 5 does offer plenty for fans to enjoy, including seeing the older characters truly teaming up and better storylines for the likes of Amanda LaRusso (Courtney Henggeler), who feels more involved this time around.

As ever, the season shows the creator’s continued canny thinking when drawing from the franchise’s past. Old flames and former foes both show up here, though neither in ways you’d quite expect (there is great use made of one particular character from the third movie, though we won’t spoil it here).

While legacy sequels continue to be a big trend, ‘Cobra Kai’ was ahead of the game on that front and continues to be one of the best examples of how to follow up a much-loved movie (or franchise) knowingly, smartly, and occasionally hilariously. It’s never afraid to be silly when necessary and fully understands the appeal of the movies it draws from. The show will poke fun, but it’s also always respectful of the stakes.