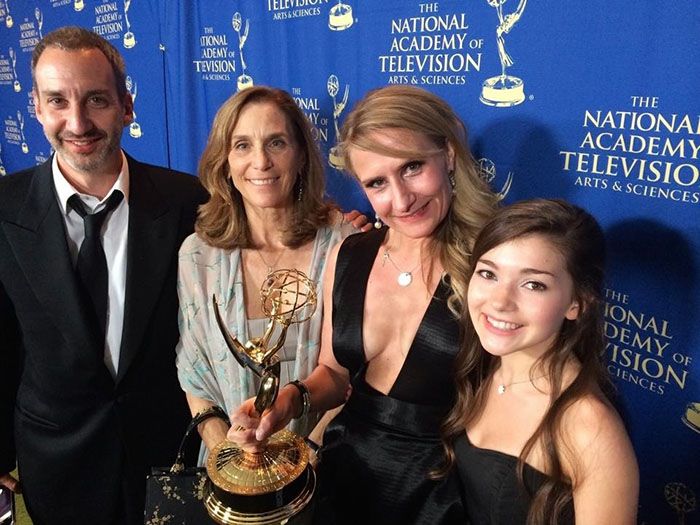 When Rebekka Sorenson took on the role as costume designer for Lifetime’s “The Unauthorized Full House Story,” she knew exactly where to start to cover the fashion trends of the ‘80s and ‘90s that are identified with the beloved sitcom.

“You always start by reading the script and then you talk with the producer and director about the direction you want to go,” the 2014 Emmy-winning costume designer (for the Hub network’s “Spooksville”) tells Made in Hollywood Teen.

Sorenson says that one of the biggest responsibilities for a TV and film costume designer is to communicate with the key players on the project, which she says is usually the director, producer, director of photography or network executives. “You always show ideas when you have a first meeting to be on the same page. It’s always easier to look at photos than talk—our definitions, sometimes, are different.”

The behind the scenes drama of ABC’s “Full House,” which ran 1987 to 1995, plays out in a juicy TV movie that airs Saturday on Lifetime. But to depict the fashion trends of the time period, Sorenson and her team shopped mostly at vintage stores and had to do only a few alterations to the costumes. This meant that she had to construct a storyboard for the scenes described in the script.

“I didn’t sketch anything on this one but I definitely had to do boards. I will do each character with a spreadsheet of ideas, so if someone’s getting married—which we do in the movie—I’ll present a wedding dress. Or if they’re jogging, or going to a beach, you present different ideas for those looks.”

“After outfits are approved, then you do fitting photos,” she says, adding that she will then receive feedback during the process . It is at this point that the wardrobe for certain scenes might be switched depending on what the show runners say.

If it sounds like there are a lot of people to please, that’s because it’s true. Sorenson adds: “You also have to please the actor because if the actor’s not happy, they won’t do their best work.”

As a child, Sorenson says she always expressed an interest in fashion. That passion led her to pursue a Bachelors of Fine Arts degree in set design from Vancouver’s University of British Columbia. But it wasn’t until after she graduated that she began working is costume design for TV and film—something she says is an entirely different process than her background. “I went straight from being a theater designer into film, so I learned myself and through others.”

The best way to get started in costume design for film and TV is through internships and volunteering your time, she reveals. “I’ve had people who’ve come to me and volunteered for a week and are still here with me,” Sorenson says, adding, that some of her successful volunteers had “no schooling at all.”

So what does someone look for in a costume designer? “We always say common sense – but our common sense is different,” she says, explaining that the career requires you to always be focused and pay attention to details.

“Basically when you have someone on set dress and you see anything off—a tag hanging out, pants not hemmed, if they need to lint, anything like that—you can tell anyone with common sense will [have it taken care of] at the right time.” Sorenson warns first timers to recognize that film and TV is a team effort. “Sometimes they go by personal tastes and not what we’re looking for.”

Of course, having the skills and competency is not enough. She says the people who stand out the most are creative and follow instructions. “If they come back with ideas then you know this is a keeper, but if someone comes back with the polar opposite, then you think this person might need training or just doesn’t get it. I’ve had people who want to do this so bad, but don’t get it.”

See her latest work when “The Unauthorized Full House Story” premieres Aug. 22 on Lifetime at 8 p.m.

From its start as an unassuming family comedy in 1987 to its eventual wildly popular 192-episode run,...Read More