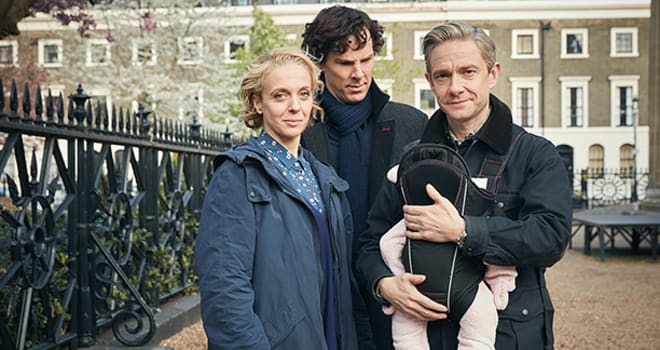 When "Sherlock" returns for its fourth season on Jan. 1, a new baby will be part of Sherlock Holmes' (Benedict Cumberbatch) life. His friend and partner, John Watson (Martin Freeman), has had a kid with wife Mary. And judging by Sherlock's expression in the photo above, this is one thing he can't puzzle out.

"Stakes get bigger. What might have been a little bit of fun three weeks ago is now kind of serious, because you are responsible for someone else's life," he said.

While the friendship between the two men remains, Freeman added, "I think obviously what happens when one friend has a child and gets buddied up with somebody else then that immediately has a dynamic effect on the friendship. I don't want to give anything away, but there are some changes afoot."

Not only are the stakes bigger for Watson now that he has a child, more danger abounds in the form of a new villain played by Toby Jones.

"That character is maybe the most dark-hearted character that we've ever had, including Magnussen and Moriarty, maybe even. He's someone who truly turns Sherlock and John's stomachs and who they really do want to bring down. They want to take him down."

19 Best TV Shows to Binge Over the Holidays, Ranked by Time Commitment