'Agents of S.H.I.E.L.D.': Clark Gregg Is 'Nervous Just Talking About' a Coulson & May Romance 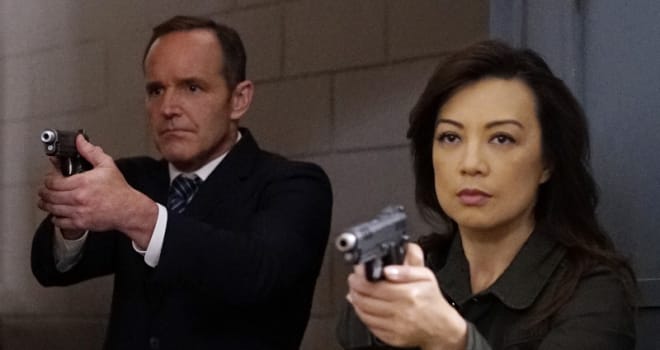 It's looking like the action may about to get even hotter for "Marvel's Agents of S.H.I.E.L.D.'s" perpetually under-fire operative Phil Coulson -- or make that steamier.

Coulson and his longtime colleague and increasingly close friend Melinda May have, of course, been through a multitude of Marvel Cinematic Universe wringers over three and half seasons, and in recent weeks it looks like the two espionage veterans may be inching closer to pushing their relationship beyond its professional boundaries.

It's a dicey proposition for the heroic agents, not to mention the show -- despite a very vocal fan contingent that's long been rooting for a Coulson-May hookup; as the show launches its new midseason "LMD" storyline on Jan. 10, even star Clark Gregg admits to Moviefone that he's feeling his own set of stomach-fluttering butterflies at the prospect, even given his potent chemistry with co-star Ming-Na Wen -- especially since May's been replaced with an A.I. duplicate.

Moviefone: How do you think the "Philinda" fans, the Coulson-May 'shippers, are going to feel about the latest turn the show is going to take? It's partly a dream come true, and partly not exactly what they've been crossing their fingers for, as it's not necessarily a given that's it's the real May he's getting closer with.

Clark Gregg: Yes, one of the things that goes on in television and in our universe now is our fans are very active. They make it known which romances they're interested in, which they're less interested in. Certainly, there have been very vocal supporters of what you call the Philinda relationship. I think in different moments, it's certainly something that has to have popped into the head of both Phil and Melinda.

I love the difficulty of it. I love how dangerous it is because this is a job where family relationships really are not possible in the normal sense. These people become family. She is so much more to him than a coworker. I think there's a reason that they've been working together for more than 20 years, off and on, without crossing that line, because it's a dangerous line to cross as everyone knows. Certainly, with the passing of Andrew Garner, her ex, and some of the business she did about that, something is different now, and that possibility is being explored.

I think some of the moments that we're not sure which Melinda we're dealing with, that's certainly a whole new part of the equation -- but I think that there's something going on in the actual Phil and the actual Melinda that is different. I don't know. I have really passionate feelings, pro and con, you know what I mean? We've all been in a situation like this with a very close friend, I think, and boy, it makes me nervous just talking about it.

Tell me about having those conversations with Ming to move this forward as you guys are figuring it out, developing that chemistry, and pushing it forward. What's been fun about collaborating with her?

There's a lot of chemistry just to begin with.

Ming kind of has that with everybody.

I know. It's true -- she's a chemistry-full person! There's always been something there. It's a little bit: these poor horses at some point should be let out of this barn before they kick the rest of the slats out. On the one hand, alright already! If it's going to happen, let's go! But nothing is that simple on this show.

I'm excited to play out the various permutations you mentioned. I'm wary of talking about them because I don't really know what's going to happen. If it's anything like the rest of the show for poor Coulson, it's going to end up in heartbreak.

Or another missing limb.

You mentioned that sense of family. At the close of the "Ghost Rider" arc, his S.H.I.E.L.D. "family" has reunited. It has to feel good for Coulson that his wayward children have come back into the fold. Tell me what that means to him and where that positions him going forward.

He's vastly relieved to have Daisy at least within sight of him on the base, but I think the idea that just because she's moved home means that the damage is healed, and the guilt that she feels is healed, is naive. He's too savvy. I think he knows that the person who comes back still is really hurting and not sure now to open up again. So it's hard. It's complex.

As Coulson learns more about Director Mace, he's an interesting character because we still don't know which way the wind blows with him, necessarily. Tell me a little bit about where that's going and what's been fun about discovering that relationship for you.

I love what the writers have done with the character Jeffrey Mace, the Patriot. We did not know what to make of him. He was very much someone we believed was thrust upon them. Later, we learn he's an Inhuman, and that Coulson requested an Inhuman to be running S.H.I.E.L.D., which is a very smart move. It puts Coulson back in the field, which he likes, and someone else is running S.H.I.E.L.D. and making decisions that he doesn't endorse quite often.

I also love that they haven't made him a villain, at least as far as I can tell. He's a flawed person who happens to have powers, which is a smart, logical extension of this idea of Terrigenesis. Some people are going to be weird PR freaks who may not be necessarily the greatest leaders who suddenly have powers.

What Jason [O'Mara] has done with him is so surprising and compelling that it's really hard for Coulson to hate the guy. There is something about him that wants to do the right thing and, as Coulson knows, has been thrust to an impossible job.

For you, what has been the creative thrill of this particular season, and as we move forward with Coulson now?

There's so much from the beginning, the reveal of HYDRA, the destruction of S.H.I.E.L.D., rebuilding S.H.I.E.L.D., the Sokovia Accords -- I don't know. I guess, to have the HYDRA plot, the Grant Ward plot, really played out so magnificently and finished to a certain extent, for now anyway, and to be playing with new things, LMDs, the magical elements of the Marvel Universe that are connected to "Doctor Strange." That's exciting.

But I think our version of the Sokovia Accords, the way Inhumans are being treated as The Other, and registered, and treated as some kind of different species than the rest of us, though they didn't change because of any choice they made, I don't know, suddenly feels remarkably timely: I read about an idea of having a Muslim registry yesterday. I went, "Wow, OK."

We've heard that General Talbot is coming back, and I love the dynamic between Coulson and Talbot.

Usually, they end up trying to do the same thing with such radically different styles that they end up at each other's throats half of the time, but also, they've gradually built a lot of respect from when Talbot was first hunting us down.

We all get happy when The Three Stooges."

New episodes of "Marvel's Agents of S.H.I.E.L.D." return to ABC on January 10th.