Female Filmmakers in Focus: Haifaa al-Mansour on 'The Perfect Candidate'

Welcome to Female Filmmakers in Focus, where you will find a recommendation for films directed by women to seek out each week. This week features an interview with Haifaa al-Mansour about her latest film ‘The Perfect Candidate.’ Plus a recommendation to pair it with Rachel Lears’ 2018 documentary ‘Knock Down The House.’ 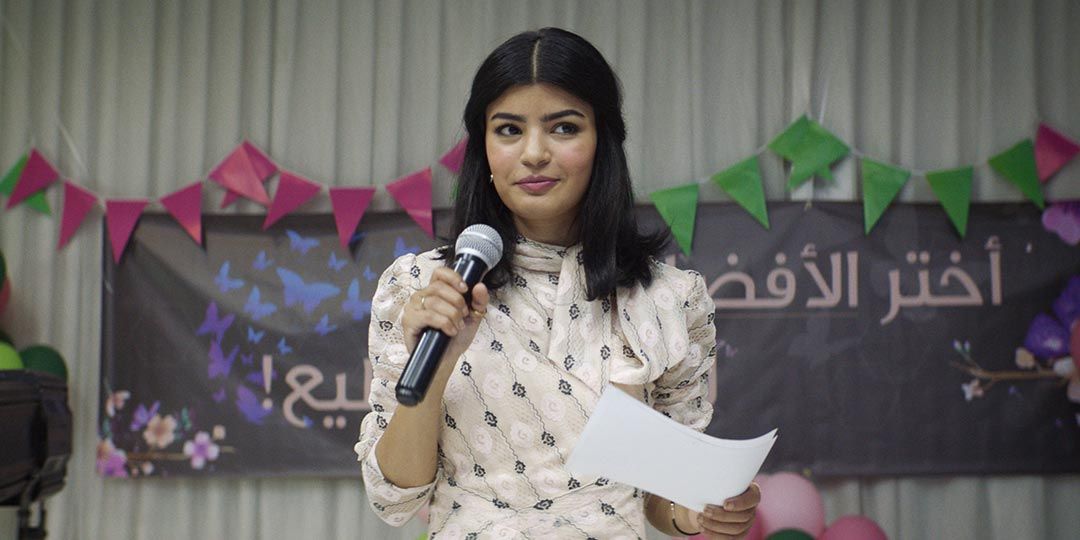 Haifaa al-Mansour broke out when her debut feature film ‘Wadjda’ made its world premiere at the 2012 Venice Film Festival, making her the first Saudi female director. Ever. Her father, poet Abdul Rahman Mansour, introduced her to movies via home video as there were no movie theaters in Saudi Arabia between 1983 and 2018. She received a degree in comparative literature at The American University in Cairo and a master's degree in film studies from University of Sydney, Australia. She cut her teeth making shorts and a documentary before directing her debut narrative film, and has followed its success with several episodes of television, as well as three more feature films. Her latest, ‘The Perfect Candidate’ competed for the Golden Lion at the 76th Venice International Film Festival and was the Saudi Arabian selection for Best International Feature Film at the 92nd Academy Awards, although it was not nominated.

‘The Perfect Candidate’ follows Dr. Maryam Alsafan, a rural doctor who, at first, yearns for a better position at a more urban hospital. When an issue arises with her travel papers on the way to a conference, she puts her name forth as a candidate for local office, mainly to get some face time with an official who might be able to help her. Now stuck running for office, Maryam overcomes prejudice from both the community and her family. Running on a platform that promises to fix the road heading toward the hospital, she is determined to show that she is not just the best candidate for the women in the community, but the best candidate for everyone.

A determined young Saudi doctor's surprise run for office in the local city elections sweeps up her family and community as they struggle to accept their town's...Read the Plot

Moviefone spoke to Haifaa al-Mansour about her new film.

MovieFone: What drew you to this topic?

Haifaa al-Mansour: There are big, seismic changes taking place right now at home in Saudi Arabia, especially for women, and I felt like I really wanted to capture this moment and contribute to it with this film. We went through such a long period of time where nothing changed, where it seemed like even the slightest openings or relaxations of the cultural restraints we lived under seemed impossible, especially when it came to the lives of women. But now the pace of change is so fast that it is hard to keep up with, and the challenge now is to encourage people to go out and make the most of the opportunities they have. Especially for women, it will take a huge shift in thinking to fully understand and embrace the freedoms they now have the chance to explore.

MF: I love the way the characters are dressed so differently in their homes than they are out in public. Could you expand on how the costuming works into the themes of the film?

HaM: Clothing is a complicated issue for Saudi women, because our lives are so different in the public and private spheres. And we have had so few opportunities for creative expression in the past, so fashion was really a primary outlet for our expression. And for this film in particular I wanted to tell a story about a culturally conservative, traditional woman who decides to embrace the changes that are taking place and go out there and seize the moment in public. So she covers herself in public, which is still the way the vast majority of Saudi women dress in public. This presents a lot of challenges for her in “putting herself out there,” when ironically, this is something she has been taught to avoid her entire life.

So the reality of her journey, of stepping out of this very private world and into the public sphere, is that it will be difficult, and lots of people will be critical of her choices, but it will ultimately open up a whole new world for her. I want to stress to the women of Saudi Arabia how important it is to go out there and take a chance, even if you don’t have any experience in doing so. It is going to be hard for Saudi women to put themselves out there, and they are nervous about doing things they haven’t done before like driving, traveling, or uncovering their faces.

MF: Dr. Maryam Alsafan’s campaign, her insistence that her candidacy is good for everyone and not just women, and especially the very end of the film, with what the old man tells her, it feels a bit like there was some inspiration from the 2016 U.S. election. Was that at all an inspiration in this story?

HaM: Absolutely. It can be disheartening to see the struggles that women face around the world when it comes to positions of leadership and power. There are still very strong social forces and perceptions that make it difficult for women everywhere to take on roles they have earned and deserve. Through my films I always focus on female protagonists who want to work hard and do their job to the best of their abilities. For this film I wanted to create a character that is very much representative of the mainstream mentality of Saudi women. She covers her face and follows the cultural norms of the society, but ends up pushing boundaries because she wants to do her job well. The restrictions that keep her from performing her work in the ways that would best benefit the society frustrate her and force her to think outside the box. She is not a rebel for the sake of rebellion, she is someone that knows that her work can make the country a better place and simply wants to remove the barriers that keep her from accomplishing her mission. I believe strongly that this is the way that true change comes to a society, through hard-working people who simply want to be able to reach their highest potential.

MF: For the local politician's YouTube ad that inspires her own filmed ad, did you study any specific local election ads?

HaM: I think politics is ultimately very local, and from the outside the representatives of any given area will seem somewhat absurd to people from somewhere else. It is important to understand that people face different challenges, have different fears, and have been raised with different values and dreams in other places. So they are not going to look for the same type of leaders that I might be looking for in my small town in Saudi Arabia. Although Maryam is a local in her town, where her family has lived for generations, she is an outsider as a candidate simply because of her gender. People look at her the same way they would look at a candidate from somewhere else. So I wanted to capture that sense of absurdity, in the way she is perceived by the people who should actually see her as one of their own.

MF: Can you talk about the film's locations? Where did you shoot? Were there any difficulties?

HaM: Well a lot has changed since I made my first Saudi film! It was incredibly difficult to make a film in 2011, and people were still very hesitant to embrace any public form of artistic expression at that time. Film was especially seen as taboo, and the idea of opening theaters had become a red line that most of us thought would never be crossed. Of course now everything is different, and we have cinemas going up all across the Kingdom. But the larger issue of a lack of infrastructure in the film industry remains. We have a lot of work to do in building up the tools and resources necessary to make quality films. We don’t have many people with experience in the field yet, so putting together a crew and getting the right equipment is very difficult. Getting the proper training and education necessary to help craft and shape our stories is another key area that we need to develop. It is still a very challenging place to work, and a very closed, insular society, so it was a tough but worthwhile journey.

And for my first film I couldn’t work with the men in public so I had to direct from a van! Being allowed to fully mix with my crew and be fully immersed in the production was amazing. It was also very exciting to have so many enthusiastic young Saudis working on the set. They are the future of the industry, and to see them giving their all to contribute and be a part of making the film was very special for me. We still have a long way to go in building our local crews and expertise, but the enthusiasm is there to build upon. It is an exciting time to be a filmmaker from Saudi Arabia!

MF: Dr. Alsafan’s journey to embracing her community and her family as musicians is so inspiring. Were there any inspirations for that particular aspect of the character?

HaM: Yes, I wanted to pay tribute to all of the musicians that persevered through the tough decades, where music was prohibited in public and musicians were seen as evil and degenerate. The musicians who stuck with it, who found ways to practice their art despite the limitations, carried our culture with them and saved it from being destroyed or lost forever. The band in the film is actually made up of musicians who did just that. They weren’t ever rewarded for their effort so I was so honored to celebrate them and their contributions to our culture through this film.

MF: What do you hope people will take away from this film?

HaM: I want people to think about how hard change is, and what it truly takes to create change within a society. I believe it takes time, and lots of hard work, to truly change peoples minds and alter their values. We can get frustrated, and push for quick, extreme changes, but to truly evolve a society means building up an understanding of new values in people’s hearts.

I also wanted to take a moment to celebrate the strong artistic and cultural legacy of Saudi Arabia and tell a story that stresses how important it is that we build upon those traditions as the foundation for our societies development. So much our music, theater, stories, and all forms of artistic expression were almost erased from our culture entirely, so I felt like we needed a story that reminded people of the strong artistic traditions we have, and how they can help us as we move forward into an exciting future.

‘The Perfect Candidate’ is in select theaters now.

Knock Down the House (directed by Rachel Lears)

For another film about women fighting to make their communities a better place by running for office I suggest checking out Rachel Lears’ 2019 film ‘Knock Down The House’. The Sundance hit chronicles the campaigns of four female Democrats running for Congress in the 2018 midterm election. All four women are running on progressive community-focused platforms with grassroots fundraising as they attempt to unseat long term incumbents. All four women are incredibly inspiring, but it's the footage of Alexandria Ocasio-Cortez that shines the brightest. You’ll probably need a box of tissues as you watch her win her seat by a landslide.

In 2018, a young bartender in the Bronx, a coal miner’s daughter in West Virginia, a grieving mother in Nevada and a registered nurse in Missouri join a movement...Read the Plot