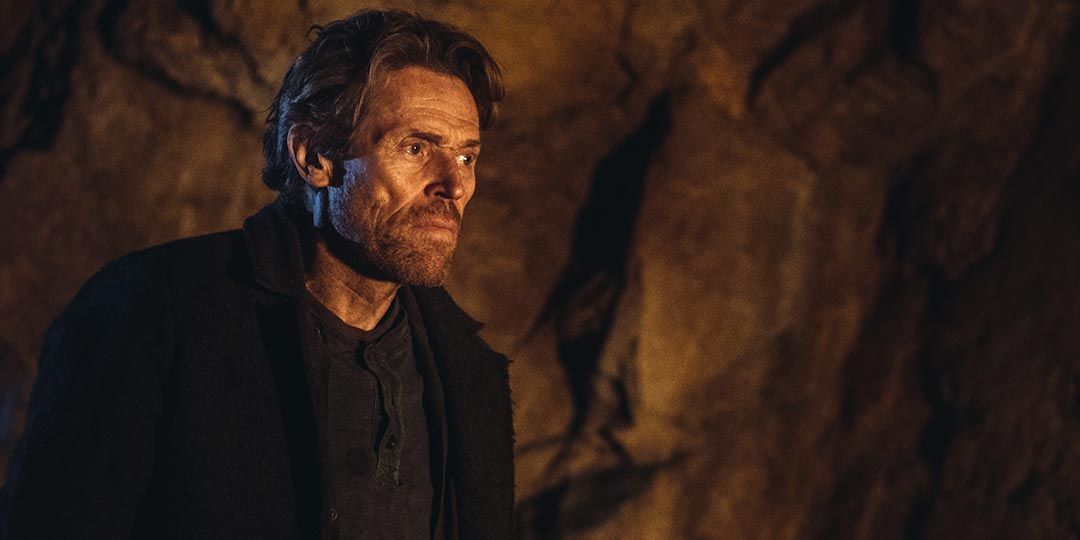 Directed by Abel Ferrara, ‘Siberia’ is dreamlike and philosophical, and is ultimately an existential meditation wrapped around an arctic survival story. That may sound like a complicated experience, but it’s par for the course for actor Willem Dafoe. Dafoe sat down with Moviefone to talk about this latest film.

Moviefone: This movie has been waiting for a release for over a year. What's that like for you as an artist to know that it's kind of gotten an audience, but hasn't been out there? Is there an anxiety there or are you feeling something like, "Come on, get it out already."

Willem Dafoe: Yeah. I like stuff to get seen, but also, I'm a patient man. And also, I'm doing other things, so once I come off a movie, of course I hope people see it. But it had an opening at the Berlin Film Festival, but shortly after that was February of 2020. So we know what happened after that. COVID really kicked in and even places that it was due to be distributed, it was put on ice for a while. So I'm glad that finally it's been distributed.

MF: Where were most of the exterior locations shot?

WD: That was shot in Northern Italy in the mountains, a region called Alto Adige. And then, of course, we shot in Mexico, and we also shot in Germany. So for a modestly budgeted film, it was quite ambitious to basically work in three different countries.

MF: And this wasn’t the first film where you're riding the sled behind the dogs?

WD: Actually no. I was very well-trained because I made a very good movie for Disney called Togo. It's on their streaming service. And even though before Siberia was in the works, even before Togo, but it took a very long time to get made. And who knew I'd make basically two sled dog movies in a row? Very different movies, I might add, but still, no. By the time I got to Siberia, they were different dogs. It was a different dog culture in Northern Italy than it was in Northern Canada. But basically, I knew a few things about dog sledding, yes, about mushing.

MF: There's a scene in the film where you're talking to your father, who is a surgeon, and your own, Willem's own father, is a surgeon. Did the writers, Abel Ferrara and Christ Zois write this with you in mind?

WD: This is the sixth collaboration I've done with Abel, and we don't work in a traditional way, and we don't work with a traditional script. Christ Zois does write some sequences, but a lot of it's built on scenarios, and usually, it comes from Abel. We'll have an idea of some images, or a situation, and then we'll flesh it out and often to make it land for all of us, we have to personalize it. So without pointing too much to any biographical details, yes, you pull on fantasies, and actual things that happened to root it because we have that ability because we're working with an open scenario. And it also makes it stick for you. It makes it personal. So yes, that's very much taken from... Also, the beginning monologue is something that I just do off the top of my head because that's something from my childhood. You don't like to talk too much about that stuff because people think it's some sort of therapy. It isn't. It's just a way to arrive at something that has a great meaning for you, and it's specific.

MF: There are certain directors you've done a lot of collaborations with. For you as an artist, what works for you? What makes for a good partnership that you'll work with somebody on multiple films?

WD: You know, to be with someone that excites you, either their ideas and their ways of working, or what kind of people they are, that makes you excited to be in the room with them, and excited to go on an adventure with them. And of course, if you've worked with them and there's a level of trust, that helps a lot because you can go deeper. You can have a shorthand, you can work quicker, you can work looser. It becomes, once again, it becomes personal. It becomes a fabric of your life. It's not just a job. It's not just a thing to make money, or to work away your life. It's family, it's making things, it's making things with people that you're interested in, and their ideas, and who they are. It all contributes.

MF: Are there particular things that you find in a script, in a project where you think, "Oh, that's the kind of thing that interests me?"

WD: Yeah. It's kind of fantasy. It's like, "Oh, God." It's either, "Wow. I never thought of it that way. I wonder what that would be like to do," you know? Basically, as an actor, you do things, or you transform into a person other than who you are. That's part of the attractiveness. So you look at those things, and you say, "Wow. Is that compelling to me? Would I learn something? Would this be interesting? Could I contribute something? Do I have special information on this? Do I have a special connection to this?" All those things are swirling around.

And sometimes the reasons to attract you to something can initially be very superficial, and then go deep and vice-a-versa. Sometimes they can be very deep, and then suddenly become superficial. So it is project by project and one of the pleasures of being an actor is when I heard myself talking about being close with directors that I repeat with, it's also sometimes nice to work in a very, not distanced, but very professional situation. You like to mix it up because it exercises different muscles and keeps you from hardening into a certain way of working, a certain way of thinking, and creating a certain image of yourself that's inflexible because I think the most important thing about being an actor is to be curious, and to be flexible, and be able to start from zero every time. It's kind of a lie. It's impossible, but it's a good ambition to have and guides me very much towards projects that no matter how they turn out, they feel worthwhile.

MF: Has that interest ever flagged before production started? You might agree to a film knowing that it might be a year before you're actually in front of the camera... Do you ever have that moment where you think, "What was I thinking when I got into this?"

WD: No, but that's a big fear of mine. Partly because for many years I had a theater company, and I was limited on how many projects I could take on. Now, I don't have a regular theater company. I still do theater, but I'm more flexible. I always kind of don't like to stack things up too much for the very reason that you say, but I find if I find beautiful projects, and my plate gets full, then I do take them on. And lately, that's happened, and I haven't run into that problem because when you apply yourself when you get there, and if you're smart about your choices for doing something, yes, your approach may change, but you trust your initial attraction to it.

So, yeah, I'm very scared. When I think the big box office draw guys that have to plan like five years in advance, so I think, "Oh my God, five years down the line. I must arrive..." and I've seen this happen. And they're like, "Eh, I don't want to do this," but they're signed, sealed and delivered, and they have to do it. I don't have that problem.

MF: Although, getting into the minutia of just kind of the profession that you're in, is here we are talking about a movie that you shot, probably a year and a half, two years ago? And although you could be in the middle of something else, now you've got to do the press tour for something you worked on months or a year ago.

MF: As a performer, do you find yourself when you're shooting something, making notes, so you have something to talk about during the press tour months down the line? What's that do for you as a performer and just as a person to jump back and forth?

WD: This is the reason why they try to do press while you're making the movie, so it's fresh for you. But the truth is, sometimes you're almost better when you have a little distance on it. Yeah, if a movie gets released quite some time after it's made, and you've made two or three movies since then, yeah, things get a little hazy. But then you start to think, and the amazing thing about making movies is I could watch a movie, and it would bring back the associations in making it very clearly.

And I may have a different take on it when it's finished, but for all practical purposes, I enjoy talking about it because I'm trying to... It's a memory game. I'm trying to remember how I felt and what expectations I had in relationship to how it turned out, and how I see it in the overall scheme of things. So I don't mind doing press at all because it's interesting to me to order those thoughts.

MF: You've done movies for long enough that you've seen some big changes in the industry, just in the process of filmmaking, the switch from film to digital, and that kind of thing. How has the industry changed for you over the years to the better? What's different now that you're like, "Oh, this is great. We used to not be able to do that."

WD: Ah, that's interesting. Well, the good news is the bad news. I think with the advancements in technology, movies can be made with practically nothing.
There's a good aspect of that, but there's also a bad aspect because these streaming platforms get flooded with so much product that you can't even get directed to the most interesting films sometimes. But it adds a level of democracy to it. Of course, what remains is the tough part is distribution now, and post. That hasn't changed.

I'm not too savvy about it. I should be because I've been doing this long enough, but I'm not too savvy about the changes. But I think the changes that are significant are more societal changes about when I started out, there was no internet, and that's all changed. And a whole generation has grown up that is more familiar with YouTube kind of attention than they are with watching a Tarkovsky film. So that's the biggest change. Our brains are being rewired on how we watch things, and I don't give up the ship. I'm not surrendering to the two minute clip, but that's something that you always have to recognize.

MF: We could talk for three hours about that, I'm sure.

WD: We certainly can.

Siberia is now in theaters and on streaming platforms.